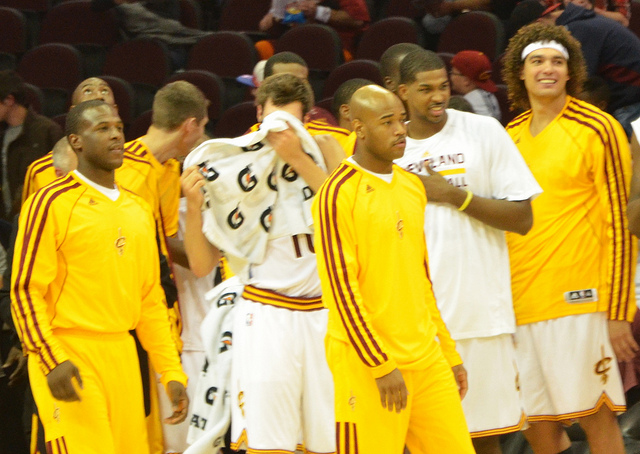 “Would I rather be feared or loved?  Easy. Both. I want people to be afraid of how much they love me.” – Michael Scott (The Office).

Unfortunately for this season’s Cleveland Cavaliers, they were neither feared (by opponents) nor loved (by the hometown fans). After entering the season with viable playoff aspirations, the Wine & Gold finished a disappointing 33-49 and failed to reach the postseason for a fourth straight year.

Though the team won’t be receiving any NBA awards, there will be a handful of Dundies (annual award given to employees of Dunder Mifflin, for the non-Office fans out there) making their way to Cleveland this spring.

In his second season, Waiters increased his field goal, three-point and free throw percentages while also upping his scoring and rebounding at a higher rate than his rookie year. While starting eight games for injured NBA All-Star point guard Kyrie Irving, the Cavaliers went 4-4 as Waiters averaged 22 points and five assists. The Syracuse product has emerged as a cornerstone for the franchise and a possible replacement for Irving at the lead guard position.

Few players live up to the hype of being the first overall NBA Draft pick, but Bennett produced one of the quietest rookie seasons for a number one pick in NBA history. Overweight and out of shape, Bennett got off to a slow start and never recovered. He finished the season averaging four points and three rebounds without starting a single game.

The undrafted rookie quickly became a favorite of both the fans and head coach Mike Brown. Though his statistics were modest (five points, two boards, 3:1 assist-to-turnover ratio), his defense and overall effort were a pleasant surprise. The guard from St. Mary’s played in 72 games with four starts and often found himself finishing games with the first unit.

Miles was off to a decent start averaging 10 points a game while shooting 39 percent from three. Then came an ankle injury on February 19th. The injury was supposed to be short-term, but ended up sidelining the free agent to be for all but two minutes over the final 27 games of the season. No one will be confusing Miles’ final two minute performance with Jordan’s infamous flu-game or Willis Reed’s Game 7.

In 24 games, Bynum managed to cause a season’s-worth of distractions. Bynum started the season opener despite playing zero minutes in the preseason and missing all of the 2012-13 campaign (with the Philadelphia 76ers). The veteran big man filled local newspapers with frequent talk of creaky knees, retirement and everything in between. Frustrated with not receiving the ball, Bynum was thrown out of practice (for shooting full-court shots among other annoyances) and was soon suspended, then traded. In less than half a season, Bynum averaged eight points and five rebounds a game.

The season may have come to an end, but the drama in Cleveland is sure to continue this summer. In July, Irving will have the chance to sign an extension, likely a max contract, to remain with the team. Rumors have already begun to swirl that the point guard wants out of Cleveland. Come July, the NBA will know whether or not Irving will have the chance to receive a Dundie in Cleveland or elsewhere. Things could get interesting.

That’s what she said.