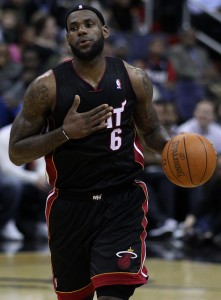 Game 1 of the Miami Heat versus the Charlotte Bobcats series went to the reigning and defending champions. The Heat topped the Bobcats 99-88. Since the 2010-11 season, the Heat have had a flawless record of 15-0 against the Bobcats, and this game continued their streak. Also, the Bobcats have never won a postseason game.

LeBron James and Dwyane Wade both displayed efficient offense against the Bobcats, as James dropped 27 points and Wade chimed in with 23 points. Wade made 10 of his 16 shots from the field, looking ready to endure the long road of NBA Playoffs basketball. The Bobcats established a four-point lead by the end of the first quarter, but the Heat rolled past them by the end of the second quarter and sealed the deal with an 18-4 run in the fourth.

The game was at its most competitive in the third quarter, as neither team led by more than three points for the most part. In the final seconds, James made a three-point dagger to help the Heat have a 72-65 advantage entering the fourth quarter, where the Heat pulled away.

The Bobcats put up a valiant effort, led by Kemba Walker, who contributed 20 points, five rebounds and six assists. Al Jefferson also played a solid game, racking up 18 points, 10 rebounds and two blocked shots in the contest, despite being troubled with a left plantar fascia strain.

Game 2 of the Heat versus Bobcats series will be on Wednesday, April 23rd.