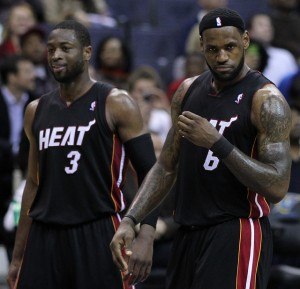 The Miami Heat improved to 2-0 in their series against the Charlotte Bobcats. Lebron James had a stellar game, finishing with 32 points, eight assists, six rebounds, and four steals in a competitive Game 2 where the Heat took the win over the Bobcats 101-97.

The Heat were hot from the field tonight, having a collective field gold percentage of 52.2 percent, holding off the intrepid Bobcats. The Big Three for the Heat were the top three scorers in Game 2 for their team, scoring 67 of the 101 points in the contest. Chris Bosh was on fire, contributing 20 points, in which he hit four shots from beyond the arc. Dwyane Wade didn’t find his shooting touch from the field, but found his way to the charity stripe and chipped in 15 points.

Despite the loss, the Bobcats put forth a valiant effort in going head-to-head against the champs. Al Jefferson labored up and down the court, but still managed to grind out 18 points and 13 rebounds in the contest. Michael Kidd-Gilchrist led the Bobcats with 22 points, making a stellar 9 out of 13 shots from the field, and also pulled down 10 rebounds. At the half, the Heat had a 10-point lead, but the Bobcats managed to keep from getting burned and battled back. The gritty Bobcats went on a 10-0 run in the fourth quarter, but it still wasn’t quite enough to get the job done.

The Heat took on the Bobcats’ best flurry of shots, managed to stay on their legs, and finish them off by the end of Game 2. Now the Bobcats are down 0-2, and it seems that they just can’t manage to grind out a win.