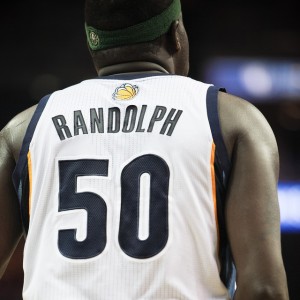 No team in the NBA rivals the Oklahoma City Thunder’s endless raid of offense and malice and neglect for opposing defenses while in transition. No team in the NBA has a better scorer than Kevin Durant or a point guard as unforgiving and aggressive as Russell Westbrook. No team has a tandem more effective on the run than these two NBA All-Star caliber players seeking their first championship of their young careers. When the Thunder push pace in a basketball game to their insanely fast comfort level, no team is able to stop them.

That is, until now.

The Memphis Grizzlies have continuously halted any fast-pace, transition offense the Thunder have tried to implement in Games 2 and 3 of this first round series, beating OKC in overtime 88-85 on Thursday night. In fact, this team stopped the run-and-gun play style of OKC so well that I almost sat down to write this review halfway through the third quarter when the Thunder went down by 17 with no flash of life offensively, and nothing but empty catastrophe defensively. The Grizzlies locked down a struggling Kevin Durant every time he attempted a shot from long-range, forcing him to finish 0-for-8 from behind the arc as the Thunder missed his three-point production mightily throughout a game empty of confident offensive possessions.

That’s what this team seems to be lacking more than any other trait in basketball – confidence. Pouring on to its offensive woes and missed opportunities in Game 3, the Thunder did not string together a stand of defensive stops until the fourth quarter, as they closed down on a double-digit lead to ultimately force overtime. It seemed as if this defense had to have its back all the way against the wall to realize that switching Kendrick Perkins onto Mike Conley for multiple possessions in a row probably wasn’t the smartest idea, as the Grizzlies translated missed assignments and botched switches into some of the easiest buckets of this postseason. This team scored virtually every single time it had the ball, very reminiscent of the defeat it handed OKC in Game 2. No offense is more efficient when the game is slowed down than Memphis, and Oklahoma City enabled this slow pace again tonight, not realizing until the final period that Russell Westbrook and Kevin Durant are damn good when given the opportunity to get out on the break.

Three-point shooting is an absolute necessity for the Thunder to implement into the offensive game plan moving forward, as the Grizzlies have been far too dominant at protecting the perimeter against a team with huge long-range potential between Russell Westbrook, Kevin Durant, Derek Fisher and Caron Butler. The lack of deep shooting for this team throughout this series has made floor spacing a complete mess, as the most interior action the Thunder saw in Game 3 was a couple of offensive put-backs by Perkins and a dunk or two between Serge Ibaka and Durant.

As Game 3 went to overtime after an unlikely run by the Thunder, so too did the team’s stamina and chances of winning the game. The Grizzlies were able to close out the overtime period like they do so well, granting Marc Gasol and Conley clean looks at the basket and halting any late charges by the Thunder. This is a team composed of players who thrive toward the end of basketball games, and it showed through in this matchup. With a 2-1 lead over the Thunder, the Grizzlies will likely look to take full advantage of their home stand before heading back to Oklahoma City to wrap up the series.

If the Thunder can play like it did throughout a majority of the fourth quarter, however, this team has a legitimate and even great chance of taking the series. A few points of defensive emphasis that worked toward the end of the game included switching Thabo Sefolosha onto Mike Conley, to give Westbrook a rest as he utilizes a majority of his energy on the offensive end of the floor. Giving Kendrick Perkins the daunting task of guarding Zach Randolph worked surprisingly well, as superior size seems to be the only thing slowing down the Grizzlies’ big man.

Game 3 posed legitimate questions for the Thunder, and how they respond throughout the next game in Memphis will decide whether or not they make it out of the first round with intentions of winning a championship. While this is one of the team’s toughest matchups, it is one that can be overcome with a more aggressive defensive approach to make life on offense a hell of a lot easier.