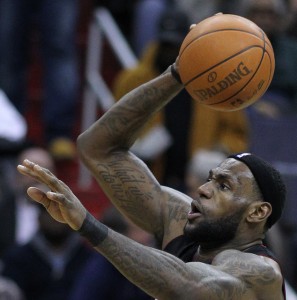 It took five tries but the Miami Heat got their first win against the Brooklyn Nets this season. LeBron James and Co. cruised to a 107-86 victory over the Brooklyn Nets in Game 1 of the much anticipated matchup.

The last time these two teams met, Mason Plumlee stopped LeBron James at the rim with an NBA-certified clean block in the closing seconds of a nail-biter. Although this game was in May instead of March the previous Heat-Nets matchups were a bit more contentious.

Unlike the four regular season contests that came down to the final minutes, Miami kept the Nets at bay throughout the second half. A three-point halftime lead ballooned to 13 after the third quarter and the Nets didn’t make it much of a game from there.

The Nets maintaining their regular season “dominance” of the Heat wasn’t the only storyline that failed to live up to expectations. The reunion of the Boston Celtics’ Big 3 left much to be desired. Ray Allen held up his end of the bargain, leading the Heat bench with 19 points and shooting 4-of-7 from behind the arc but the delegation from Brooklyn was a non-factor.

Paul Pierce had a pedestrian eight points and led the Nets with a paltry six rebounds. Kevin Garnett on the other hand was practically Hibbert-esque. He had his first career scoreless playoff game to go along with four boards in 16 minutes.

Given both teams’ advanced age, the difference in rest definitely gave Miami an advantage. While the Nets were going blow for blow with the Raptors all last week, the Heat hadn’t played since April 28.

Erik Spoelstra decided to go small with Shane Battier in the starting lineup, and the extra rest seemed to revitalize the former veteran, who has been inconsistent this season. Battier played his trademark solid defense and went 2-of-4 from beyond the arc.

Battier, the aforementioned Allen, and Norris Cole kept the Nets honest which opened up driving lanes for Miami. Despite having success rotating and switching against the Heat in the past, the Nets often miscommunicated on Tuesday. Their sluggish play allowed Miami to shoot 56.8 percent from the field and finish with a massive 52-28 advantage in the paint.

Brooklyn only mustered one block while Chris “Birdman” Andersen had four by himself.

The Heat didn’t seem particularly crisp, but the Nets never quite took advantage of the numerous opportunities they had to get themselves back into the game. Their legs just weren’t there. Most of the fourth quarter was a formality as Jason Kidd hoped his bench would spark a comeback that never materialized. Hopefully Brooklyn can find enough juice to bring it for both halves in Game 2, for themselves and the fans.