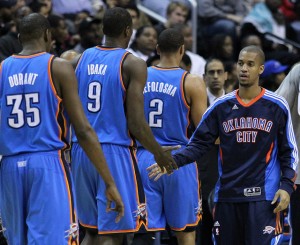 The Oklahoma City Thunder got it together in Game 2, beating the Los Angeles Clippers 112-101. 2014 NBA MVP Kevin Durant, who was awarded the trophy before tip-off, had a tremendous game with 32 points, 12 rebounds, 9 assists, and 2 steals. Russell Westbrook wasn’t too shabby himself, dropping a triple-double: 31 points, 10 rebounds, and 10 assists. The one-two punch of Durantula and Westbrook was just too much for the Clips last tonight, and now the series is tied 1-1.

Rebounds were key in Game 2, as the Thunder hustled down 52 boards, out-rebounding the Clippers by 16. The Los Angeles Clippers just seemed to lose their momentum in this game. Chris Paul was scoreless in the first quarter of the contest, and Blake Griffin struggled offensively, going 5-of-13 from the field. The Clippers were happy to win one on the road, but they would’ve been more content in stealing two games at the Chesapeake Energy Arena in Oklahoma City. There’s no doubt that both teams have their eyes on the golden prize, as they’ve exchanged heavy blows so far.

J.J. Redick led the Clippers with 18 points, CP3 added 17 points, and Matt Barnes put up 11. Griffin didn’t play like himself, only scoring 15 points. The magic from beyond the arc in Game 1 didn’t spill over into Game 2, as the Clips shot poorly from downtown this time around, going 9-of-27.

The Clippers were giving the Thunder easy shots, as they couldn’t quite focus enough on the defensive end. It seems that they were lacking fuel to keep up with the pace of the playoffs. Look for Doc Rivers to ramp up the Clippers defense to contain Durant and Westbrook.

This series will move to the Staples Center in Los Angles for Games 3 and 4. The Clippers and Thunder will go head-to-head again on Friday, May 9, 2014. This matchup looks like it may go down to the wire; seven may be the magic number once again.