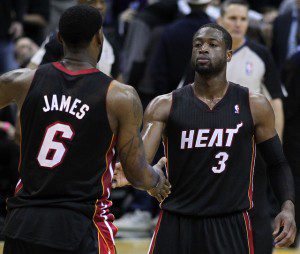 Brooklyn we have a problem. The Miami heat beat the Brooklyn Nets once again 94-82 in Game 2 of the Eastern Conference semifinal. Too bad Deron Williams didn’t even bother to show up.

The Brooklyn Nets put up a better fight than their effort in Game 1, they even led at the half, but the 98-million dollar man was MIA. Williams couldn’t find the bucket at all, going 0-9 from the field in 37 minutes of play. With Williams performing so poorly the Nets needed to turn Miami over to get extra possessions, but the Heat played extremely carefully. The Nets could only manufacture eight Heat turnovers, which was an issue considering Brooklyn’s iso heavy offense shot a predictably weak 42 percent from the floor.

The Nets’ platoon style of offensive production seemed even more futile without Williams providing any scoring punch. While Paul Pierce and Joe Johnson each had 13 a piece, not one Net imposed their will on the game. The isolate and kick style offense that Brooklyn runs often lead to contested jumpers and despite having skilled perimeter players, those shots are difficult to hit consistently.

On the contrary, Miami’s ball movement let Heat role players make an impact on the game. Once again, Ray Allen stuck it to his former Celtic teammates. Allen had 13 points and a team high eight rebounds. Kevin Garnett continued his slow trudge into retirement putting up 4 points and commendable 12 rebounds in a losing effort.

Brooklyn’s inability to bring any sort of interior presence into these contests is troubling for anyone expecting a competitive series. 38-year-old Ray Allen should never lead any team in rebounding. Case in point, with 3:34 remaining and the Nets trailing by only eight, Mario Chalmers brought the ball across halfcourt and this happened:

Instead of getting even one stop and a score in a critical possession to cut the lead to six, Brooklyn gives up three offensive boards and essentially the game. Pierce and Mirza Teletovic were the nominal “bigs” on that play, and neither have the athleticism to out leap LeBron James or Dwyane Wade. We shouldn’t expect a display of prowess on the boards from either team as the Nets and Heat were 29th and 30th in rebounding respectively during the season, but the Nets cannot afford to play small and give the Miami extra possessions.

The lone bright spot for Brooklyn was Mirza Teletovic who had 20 points on 6-9 shooting from behind the arc. He hit his first four shots from downtown but couldn’t keep up the torrid pace in the second half as the Nets crumbled and bowed to the King.