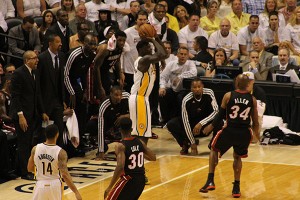 With LeBron James in foul trouble and limited to just 24 minutes of play, the Indiana Pacers managed to gut out a tough win over the Miami Heat, 93-90 in Game 5 of the Eastern Conference Finals to stave off elimination.

For a team that was harshly criticized for its lack of effort in Monday night’s Game 4 loss, the Pacers showed resilience and came out playing with that same chip on their shoulders that made us take notice years ago.

Paul George led the charge for Indiana, scoring a career playoff-high 37 points to go with 6 rebounds and 6 steals. Twenty-one of those points came in ridiculous fourth-quarter barrage.

With Paul carrying the offense, Lance Stephenson brought the crazy.

In what can I can only describe as a mixture of Gary Payton and Dennis Rodman, Stephenson did every annoying little thing he could to get under the skin of the Heat, mainly LeBron James. From bumping and grabbing James on every play, to just plain being in his personal space all evening. At one point Lance even appeared to be blowing in LeBron’s ear.

Even with all of Lance’s antics, it didn’t seem to rattle the reigning champions. But LeBron’s foul trouble did. James picked up his second foul with 2:43 remaining in the first quarter and was ushered to the bench, not returning until the 7:13 mark in the second. In less than a minute he was back on the bench after an offensive charge into Paul George.

With LeBron playing sparse minutes, the remaining “Big 2” did their best to offset the loss. Chris Bosh stepped into a scoring role, shooting the ball 21 times to lead the Miami Heat with 20 points while hauling in 10 rebounds. Dwyane Wade had an all-around game with 18 points, 8 rebounds, and 7 assists.

Miami even dusted off Rashard Lewis, who scored 18 points on six three-pointers.

Despite Paul George going HAM, Lance Stephenson’s craziness, and LeBron’s foul issues, the Miami Heat still had a chance to win the game in the final seconds of play.

With 10 seconds left and down by two, LeBron, guarded by Paul George at the top of the key, drove to his right making his way into the paint and hitting Bosh with a swing pass behind the three-point line. It seemed like a fitting end to the series to see Chris nail that shot, but fate was on the side of Indiana in Game 5.

The Series now moves back to Miami for Game 6, giving the Heat a chance to close out the Pacers on their home turf.

Frank Vogel: “My message to the whole team was the light needs to be on green for all of us, you need to go, you need to attack, you need to be aggressive. Paul took it and ran with it and took it to a crazy level.”

Erik Spoelstra: “We still had enough opportunities to come away with a win, we just couldn’t get over the hump.”