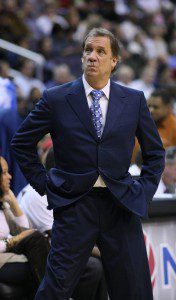 President, part-owner and new coach Flip Saunders said Saturday that star forward Kevin Love has no right to be frustrated over the Minnesota Timberwolves’ lack of recent success.

Saunders pointed to a moment early in Garnett’s career that stood out to him.

“I tell a story about — we were in the locker room when KG was in like his third year in the league, and Sam Mitchell was sitting in the locker room,” Saunders said. “KG was in there, and we had lost a couple games, and we were all sitting there talking.

Monopoly pro tip: Whenever you are fairly certain a property in your possession is going to be traded, it’s in your best interest to make that property seem as attractive as possible even if you don’t need it. This is a basic business strategy that even noobs understand. Devaluing your asset can only help others.

Kevin Love is already pissed at the Minnesota Timberwolves for a number of reasons before this poor attempt by Flip Saunders at being a stern leader. Publicly admonishing Love only strengthens the narrative that Love is ready to leave during next season’s free agency period. Teams will not be willing to give up much in trades because they know that Love is very likely to leave the team. Why would it make sense to trade an arm and a leg for love and pay Love the value of a max contract? If he’s leaving anyway, just sign him in free agency instead of risking losing assets and having Love leave in free agency from your team.

Also, when are we going to talk about the fact that Saunders is the Minnesota Timberwolves head coach, president of basketball operations, and a part owner? I’m not saying no one should be allowed to do all of those jobs, but that normally comes after a history of success because, you know, you have to live up to all of the money you signed on for. Sound familiar?

I hope this saga is done soon. The Timberwolves have blown the first half of a great player’s career for the second time in 15 years. They need a complete overhaul in the front office, not just signing friends of friends to handle basketball decisions. The organization’s screw ups are numerous and have been well-known for quite some time. Minnesota won’t know postseason success until they change their approach. Unlikely but that’s what dreams are for. – AL