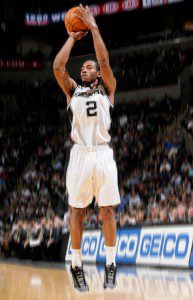 Kawhi Leonard has been waiting to have a breakout game during this postseason. After scoring nine points in each of the first two games of this year’s NBA Finals he finally made a statement. The box score shows that he finished with 29 points on 10-13 shooting. What the box score does not show is how much of an x-factor Kawhi Leonard is for a Spurs team that already has a legendary trio for the Heat to try to handle.

Leonard finished the first quarter with sixteen points that contributed to the 41 points scored by the Spurs in the opening quarter. LeBron added fourteen for the Heat who managed to put up a respectable 25 points in the first 12 minutes of play. Halftime brought with it a 71-50 lead for the Spurs which was ultimately too much of a deficit for the Heat to overcome.

The Heat were able to cut the lead to seven with two minutes left in the third quarter, but a Marco Bellineli three-pointer took the lead back to ten and ended any real chance the Heat had of a miraculous comeback.

The stats associated with the Spurs performance will be talked about by every outlet, but the negative stats for the Heat are what should be focused on. Start with Mario Chalmers who is having an absolutely horrible Finals thus far. He has scored a total of ten points in seventy minutes in the first three games of the series. These come off three made shots from the field and zero in last night’s game.

Chalmers went 0-5 in Game 3, which still means that he took more shots than Chris Bosh, who went 4-4. The defense of the Spurs is suffocating at times, but a player of Bosh’s caliber has to find a way to get up more than four shots, especially when he is shooting 100% from the field. I actually found myself questioning if Bosh was even in the game at certain points due to his lack of involvement in the offense. He only recorded three rebounds as well so it is not like he made up for the lack of scoring and shots in another facet of the game.

This type of game draws allusions to when LeBron James was a member of the Cleveland Cavaliers. He only put up 22 points and was tied for the scoring lead along with Dwyane Wade. For the Heat to win it appears that he will have to score at least 30 points because he is not getting enough support. Wade is capable of doing so but has yet to truly have a game in which he takes over and takes some pressure off of LeBron.

With all this being said, it will be very surprising if the Heat do not come out and win Game 4. It is just seems like that type of series at this point, although the Spurs have yet to play a bad game. It is the Heat who have been inconsistent, and have to win in Game 4 unless they want to try to take three straight with two of those games in San Antonio.