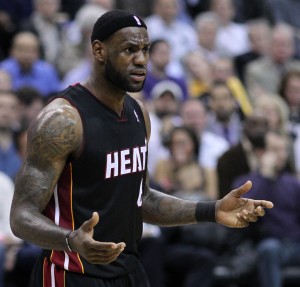 The San Antonio Spurs were mere seconds away from being NBA Champions last season before ultimately falling short. They are now just one win away from reaching that goal this year after Thursday’s dominant 107-86 win over the Heat in Miami.

The performance by the Spurs was not surprising at all. Their entire roster has been solid all series and the team’s only Finals loss was by two points. What was surprising was the Heat losing by at least 15 points for the third time. I wrote after Game 3 how it would be very shocking if the Heat failed to win Game 4. Based on how they have played in the Big Three era, it seemed that Game 4 would be an easy game to get back on track and send the series to the full seven games that were expected after last year.

Game 4 turned out to be an extension of everything that happened in Game 3. Kawhi Leonard once again played fantastic after struggling in the first two games. He led the Spurs in scoring with 20 points and minutes played  at 39. The latter stat shows the changing of the guard that is taking place in San Antonio that cements not only this team, but the organization as a dynasty.

All 13 players on the Spurs scored at least two points and they out-rebounded the Heat 44-27. The Spurs actually had one more turnover than the Heat, but 57 percent shooting will usually make up for turnover issues.

While the Heat did a better job of holding on to the ball, they once again could not keep up with the Spurs on both ends of the floor. The fewest points Miami has allowed San Antonio in any of the four games was 96 in Game 2, its lone win of the series thus far.

The two main issues for the Heat on offense that have persisted the entire series are the lack of play from the point guard position and the lackluster play by Chris Bosh and Dwyane Wade.

Mario Chalmers has been nonexistent this series and that is absolutely killing the Heat. He managed to score four points in last night’s game which puts his total to 14 points for the Finals. As for Wade and Bosh, they managed to combine for 22 points on 8-24 shooting.

LeBron James continues to carry the load but with the way this team is built, Bosh and Wade need to show up every night. That seems like an obvious fact, but they simply aren’t playing like it is the Finals. This is especially true for Wade, who seems to be aging before our very eyes. He cannot even play Robin to James’ Batman at this point.

Thursday’s game was never close and it will be even tougher for Miami to mount a comeback in this series now that it must head to San Antonio for Game 5. The magic shown by the Heat seems to be gone against a Spurs team that only gets better as time goes on; a team that makes age an irrelevant factor.

Counting a team out is never smart to do – superstitions and all – but the Spurs are playing too great in this series to not win one of the next three games. Game 5 is on Sunday and with the way things went in Miami, it may mark the end of the NBA season.