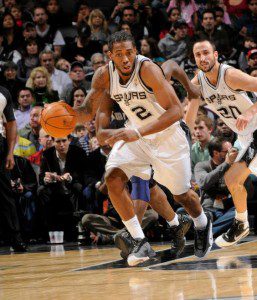 Ready or not, here he comes, you can’t hide! Kawhi Leonard is the next main man to take the wheel of the San Antonio Spurs. Everyone has noticed the hard work this kid has put in, and now he’s earned a championship ring for all his efforts. Oh, and not to mention he also got that shiny new NBA Finals MVP trophy for good measure.

Leonard played with such fire in the Finals that there was no room for the Miami Heat to flare up. When the clock finally bled dry for Game 5, LeBron James went straight to Leonard first to give him his much deserved congratulations. He knew, just like we all know, that Leonard is something special.

“Sugar K.” Leonard, who started out as an Aztec at San Diego State University, has come a long way. For the most part he’s been a phenomenal role player on an amazing team. This season he averaged 12.8 points, 6.2 rebounds and 1.7 steals per game, playing lock-down defense and shooting an amazing 52.2 percent from the field. In the Finals, he stole the fire from the Heat, plain and simple. Leonard averaged 17.8 points and 6.4 rebounds, shooting an absurd 61.2 percent. One man falls, another man rises, and so the story goes.

Leonard has had a chance to grow and evolve with the help of some of the best basketball players around: Manu Ginobili, Tony Parker, and Tim Duncan. He became part of a core that plays pure basketball, and he’s become who he is now because fate led him to San Antonio. This may be the best Spurs team in the history of the franchise. Together, they shot a whopping 60.4 percent from the field in the Finals, and created plenty of problems for the Heat on the defensive end. Leonard’s progress as a player has made the Spurs that much better. Without a doubt, he was the missing piece to win number five.

What people probably like most about Leonard is that he’s not out there to bathe in the spotlight. He’s a silent assassin that kills with relentless hard work. Leonard doesn’t care whether or not he’s a household name, and he doesn’t seem to favor any type of media trying to clip their strings into him. Sure, he plays like the next coming of Scottie Pippen, but he doesn’t seem to be concerned about that either. The man just plays basketball. If anything, it seems like he’s going to be this generation’s Tim Duncan: a technically sound, determined, and talented basketball player that chooses fundamentals over flash.

Of course, he’s got plenty of room to improve his game. The man takes efficient shots, and he’s very defense-savvy, but he has yet to prove that he has the ability to be a facilitator. The scary thing is that he has a lot of time to develop, as he’s only 22 years old. In other words, he may be a pretty great baller now, but it’s really only the beginning. Will the hype get to him? Judging by his stoic look, it doesn’t seem like that will be the case, but the hype has eaten up stars before. However, right now, even after winning some hardware, he still seems to be focused.

“Coming in, I wanted to be a great player, and right now at the beginning of my career, I’m showing some slight sunshine that I can be the player I want,” Leonard told USA Today. “I just have to move forward and keep working on my game and getting better.”

Although Ginobili, Parker, and Duncan don’t have too much time left in Spurs uniforms, they know that their team will be left in good hands with Leonard. The man was born to wear a Spurs jersey and carry the torch.

Ladies and gents, Kawhi Leonard has arrived as a certified star in the NBA.