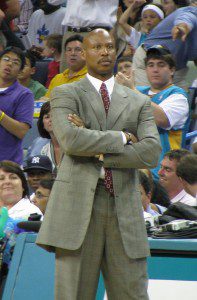 After slowly filling in the roster slots, the Los Angeles Lakers now look to fill their head coaching position, which was vacated by Mike D’Antoni April 30. After a long and thorough search, the Lakers have finally made an offer to someone. As reported by NBCSports.com on July 25:

“The Lakers have offered their coaching position to Byron Scott, first reported by Chris Broussard of ESPN.”

Before making the offer to Scott, the Lakers also considered, and talked to, George Karl, Lionel Hollins, Alvin Gentry, Kurt Rambis and Mike Dunleavy. However, in the end the offer went to the one who was the favorite from the start of the search.

So is Byron Scott the right man to coach the Los Angeles Lakers?

If you followed the NBA in the 1980′s, you should know Scott, Magic Johnson’s running mate in Showtime. Scott was a hard-nosed defender who had a terrific three-point shot and a penchant for finishing the fastbreak.

Scott had two tour of duties with the Lakers: 1983-1993 and 1996-97. The 1996-97 stint was Kobe Bryant’s rookie year, and he alluded to Scott being his mentor back then. In short, Scott bled purple and gold, although he’s played with other teams and coached other NBA franchises. Read this piece from BleacherReport.com on July 25:

“He grew up in Inglewood and played his high school ball at Morningside High, just a stone’s throw from the Great Western Forum. He came to the Lakers on draft day in 1983, by way of a trade that sent Norm Nixon to the San Diego Clippers. He was a key cog in the Showtime machinery, winning titles with Magic, Kareem and James Worthy in 1985, 1987 and 1988. Those years spent in purple and gold earned Scott the respect of the Lakers’ longtime staffers and allowed him to strike up a close relationship with the late Dr. Jerry Buss.”

Yes, Scott and Lakers General Manager Mitch Kupchak were teammates, and Scott said they had a good relationship, according to LatinPost.com on May 23:

“Obviously I go way back with Mitch, teammates for a while and won a couple of championships together, so it was good.“

So not only does Scott bleed purple and gold, he knows the inner circle of the franchise, from Kupchak up to Jeannie and Jim Buss. That being said, so did Dunleavy and Rambis. So why Scott?

Dunleavy coached the Lakers for two seasons and had a total record of 101-63. He led the Lakers to the NBA Finals in 1991, and lost in the first round of the postseason the following year. However, Dunleavy has been out of coaching since 2009-10, when he resigned from the crosstown rival Los Angeles Clippers in the middle of the season when their record was 21-28.

Like Scott, Rambis was also part of Showtime. Rambis played with the Lakers from 1981-88 and has served as an assistant coach of the Lakers in three different stints.

Rambis coached the Lakers in 1999 for 37 games, finishing with a 24-13 record, but his other two seasons as an NBA head coach were disasters. Rambis won a total of 32 games in two seasons with the Minnesota Timberwolves.

Dunleavy’s long time absence and Rambis’ losing record are valid reasons why they weren’t chosen. However, the main reason for the choosing of Scott was Kobe Bryant.

Of all the Lakers’ coaching candidates, it was only Scott who got Bryant’s endorsement. As reported by CBSSports.com on July 9, the Mamba was vocal, as usual:

“At a press conference at his annual basketball camp in Santa Barbara Wednesday, Kobe Bryant said that he supports Byron Scott as a candidate for coach of the Lakers.”

ESPN.com, on July 10, detailed how Kobe made his pitch for Byron Scott:

“’He was my rookie mentor when I first came into the league,’ Bryant said of Scott before endorsing the former Showtime-era Lakers great for the job. ‘So I had to do things like get his doughnuts and run errands for him and things like that. We’ve had a tremendously close relationship throughout the years. So, obviously I know him extremely well. He knows me extremely well. I’ve always been a fan of his.’”

The Lakers have decided to give Bryant a farewell tour that begins next season and is worth $48.5 million. And with a personality as big as Bryant, the Lakers needed a coach whom he will listen to, as much as he did with Phil Jackson. Because of their personal relationship, Scott was the obvious choice.

It wasn’t just Bryant who voiced out his opinion, Showtime teammates Johnson and James Worthy seconded Scott’s endorsement. As reported by that same LatinPost.com article:

“Magic Johnson, one of the most vocal critics of former coach Mike D’Antoni, expressed support to Scott. Laker Nation: ‘Great to see my former teammate Byron Scott get interviewed for the Lakers head coaching job!’ Johnson posted on his Twitter account.”

“Scott’s former teammate and current NBA analyst James Worthy also endorsed Scott as the team’s next coach. ‘I played with Byron Scott, so I know what he brings to the table,’ Worthy said in an interview with ESPN. ‘I know that he holds people accountable and he’s a defensive kind of genius when it comes to that I got to go with my good friend Byron Scott, if it was up to me.’”

Magic and “Big Game” James also played with Mitch Kupchak and are in the inner circle of the Buss family. Scott was in the driver’s seat because of the endorsements of Johnson and Worthy. Bryant’s pitch was the final nail in the coffin over the other candidates.

Scott is far from being just a fan favorite or an emotional choice. He has a coaching record that is very respectable and admirable.

If we take away Scott’s three horrific seasons at Cleveland, his coaching record would have been 352-355, or close to .500. He went 64-166 with Cleveland during the post-Decision period, but that should have been expected. Even Jackson and Pat Riley would’ve failed during that recession period in Cleveland.

The point here is that Byron Scott has a good coaching record with two previous teams, the New Jersey Nets and Charlotte Hornets.

In his stint with New Jersey, Scott led the team to two NBA Finals appearances, though they lost both times. Scott led the Hornets to the conference semifinals in 2007-08.

On the negative side, though, Scott was fired by both squads in the middle of an NBA season.

Scott also has a very good coaching experience with star point guards. He had Jason Kidd with the Nets and Chris Paul with the Hornets.

Although the Lakers still wish they had Dante Exum on their team, they will have to be content with their Jeremy Lin experiment this season. Scott can help Lin, and maybe build him a home in L.A., where the large Asian community will throw in a lot of support.

Scott already has some indication of that, in a report by LakersNation.com on July 23:

“I like Jeremy, I really do. I think he’s a kid that plays the right way [and] plays extremely hard. He seems to always be in attack mode offensively. [He] pushes the ball up the floor as well as anybody in the league. Defensively – the thing that I thought was going to his biggest downfall – was something that I thought he really competed at the times I coached against him.”

Kupchak has pulled out a lot of rabbits from his hat. Perhaps Lin is not just a filler nor an experiment. He may be the latest rabbit from Kupchak bag of magic tricks.

The Lakers are in no shape to win the NBA title next season, or the season after that, unless they land a top free agent in the next offseason. That being said, Scott wants them to be as tough on defense as he was when he was a Laker. As reported by ESPN.com on May 24:

“‘That’s what I was taught when I came to the Lakers, that defense wins championships,’ said Scott, who was coached by Pat Riley in L.A. ‘I think Kobe knows that, because they won championships with that formula. And I think that’s the first thing we got to get better at, the defensive part of basketball. Then we got to get better at the rebounding. So, it’s something that we would do on a day-to-day basis. You got to work on that every day, and it has to be a team’s identity and a staple.’”

The Lakers were 29th in the NBA in opponent points per game last season at 109.2, and they were 28th in defensive efficiency at 107.9. They were also 25th in the NBA in rebounding at 41 rebounds per game, so Scott is right with this one. The Lakers need to get reacquainted with the word defense before they start talking about winning NBA titles.

Despite the injuries, Scott is bullish about Bryant. He said so in that same report by ESPN.com:

“‘You still got one of the best players that ever played the game, and everybody that knows Kobe, especially myself, I know his work ethic,’ Scott said. ‘I know how he is about going about his business and getting ready for a season. He has six months to get ready for this upcoming season, and I think he’s going to come back with a vengeance. Will he be the Kobe of old? I don’t think anybody expects him to be that guy that can just dominate a game. But I think he’s going to be pretty close to it.’”

Everything in LA begins and ends with Kobe Bryant, as long as he is wearing a Lakers uniform. If Kobe is what Byron Scott is telling us, then Scott is the right man for the Lakers’ coaching job. Or else he could end up being fired by his third consecutive employer.