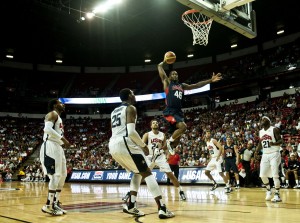 The personnel depletions in Team USA have caused some concern as the 2014 FIBA World Cup is barely a month away. So as USA Basketball gears toward its final preparations, let us see if the US will take home the gold.

The FIBA World Cup is composed of 24 teams drawn to four groups of six. Four teams from each group will move forward to the single elimination stage that will begin with the quarterfinals and end with the finals. Fortunately, Team USA had a very favorable draw, getting assigned to a relatively weak Group C. Per SI.com on July 28, 2014, here are the five other teams in Team USA’s group:

Team USA is expected to breeze through this group. In the elimination stage, Group C will be paired with Group D to face one finalist. Here are the teams from Group D: Lithuania, Angola, South Korea, Slovenia, Mexico, and Australia.

Lithuania is led by NBA players Donatas Montiejunas and Jonas Valanciunas, while Turkey has Omer Asik and Enes Kanter. Australia will be without the injured Patty Mills and Andrew Bogut, but they will have Dante Exum and Matthew Dellavedova. Not to forget Slovenia, who will parade the Dragic brothers and an average height of 6’8”. That being said, barring any accidents, Team USA is expected to defeat all of these teams and go all the way to the finals.

Unlike Team USA, Spain has to go through France, Serbia, Argentina, and Brazil, who are in either Group A or B. So for the Spanish Armada to go to the finals, they have to beat one or more of those top international squads. It won’t be as easy as it is for the USA on the other side, but Spain does have the goods to go all the way and win this whole thing.

Spain has always been the most dangerous international team of the last decade, Argentina notwithstanding. The team boasts five current NBA players in Pau Gasol, Marc Gasol, Ricky Rubio, Jose Calderon, and Serge Ibaka. Former NBA players Juan Carlos Navarro and Rudy Fernandez are also in the lineup. What makes Spain the most dangerous is that they are playing at home and will have the advantage of the unsung sixth man, the Spanish crowd, who adores their basketball players like gods.

So if the draw holds, Team USA will play Spain on September 14 in Madrid. What are their chances of beating Spain?

Without a doubt, Team USA is the favorite to win the gold medal. They will most likely face Spain in the finals, and it won’t be easy. Not only do they have to contend with the talent and international experience of Spain, they also have to worry about the crowd and the inspiration that Team Spain is going to get from their folks.

Playing in Madrid will be much like playing on the road in the NBA, which shouldn’t be too much of a problem for an experienced group of NBA All-Stars. Talent-wise, Team USA is above everybody else, including Spain. However, if we go to the specific matchups, Spain could pose a problem because of its three star big men. Spain has often used a twin tower combination during international play. Let’s face it, the trio of the Gasol brothers and Ibaka are better than Cousins, Drummond, and Davis.

Coach K has the Plumlee siblings on the USA select squad. These brothers played for him at Duke University, and there is also a possibility that he’s going to pluck one of them to have a third center on the squad.

The average height of Team USA is 6’7”, while Slovenia, Croatia, Serbia and Lithuania are at 6’8”. Spain has three seven-footers while Brazil has three quality big men in Anderson Varejao, Tiago Splitter, and Nene Hilario. If Team USA will have problems, it will be if they face these taller teams. That being said, if the USA frontline can hold its own against these taller and better frontlines, they are in good shape.

Aside from height, Team USA has everything else going for them, including having on their side the reigning NBA MVP Kevin Durant, who was also the MVP of the 2010 FIBA World Cup.

Three-point shooting is also key in international competition, and the Americans have plenty of that, led by the Splash Brothers. We haven’t even included the Bearded One, who is one of the best scorers in the game today.

Not a Dream Team

Team USA may no longer have the 1992 Dream Team that had a winning margin of 43.8 points per game. Dream Teams are a thing of the past now, but as BleacherReport.com quotes Coach K in a July 28. 2014 article:

“We’ve done this for nine years now,” Krzyzewski told Yahoo! Sports’ Marc J. Spears in a one-on-one interview. “These things, I’ve got accustomed to them happening. That’s why there is a pool of players. That’s why with [USA Basketball executive director] Jerry’s [Colangelo] leadership we developed a program where you just don’t pick 12 players, you develop a program.”

In those nine years, Coach K has a record of 62-1, with his lone loss coming to Greece in the 2006 World Championships. Krzyzewski has won two Olympic gold medals and one FIBA World title in 2010. Although Coach K has to take credit for steering the team, it’s the program that USA Basketball has that gives it continuity, even if players like Love, Griffin, and Aldridge beg-off.

Dream Team or not, this US team is going for gold. Don’t be surprised if they win it all, even without Blake Griffin and Kevin love. After all, USA Basketball is bigger than him, or anybody else.