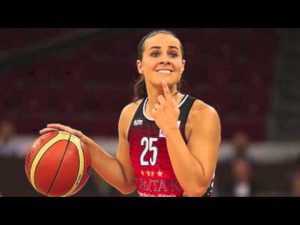 A milestone was reached when the San Antonio Spurs officially hired Becky Hammon, the first ever full-time female assistant coach in NBA history. So will this lead to the first ever female head coach in the NBA?

“If there is a woman that is the best qualified to coach an NBA team, I don’t see why it wouldn’t happen,” says Dallas Mavericks owner Mark Cuban. Several sports agents say their NBA clients have no problems playing for a female coach. ‘I think if there was a resume of success, it would be hard for players not to respect the coach. That, I believe holds true whether you are a man or a woman,’ says Madison Avenue Sports and Entertainment’s Joe Tacopina.

Yet actions speak louder than words. Currently, there are no women coaching men’s Division I NCAA basketball teams or serving as main or assistant coaches in the NBA. There’s also no expectation this will change in the near future. Whenever there’s an opening, women aren’t considered as potential contenders.

In 2012, it seemed that having a female NBA coach was a distant dream, but after seeing the first openly gay NBA player participate in his “coming out game” earlier this year, we all knew that it was time for barriers to start falling in the NBA.

Becky Hammon is no stranger to NBA basketball. She has participated in the NBA All-Star Weekend shooting competition since 2008 and has become good friends with Spurs stars Tim Duncan and Tony Parker. And it’s not that she’s just popular with the Spurs, this girl has got game. And not just as a player, but as coach, too. Even Spurs coach Gregg Popovich has great things to say about Becky, per ESPN.com:

“I very much look forward to the addition of Becky Hammon to our staff,” Popovich said in a statement released by the team. “Having observed her working with our team this past season, I’m confident her basketball IQ, work ethic and interpersonal skills will be a great benefit to the Spurs.”

Becky Hammon is the first, but she won’t be the last. There are so many capable female coaches out there who dream of coaching in the NBA. It’s been a long time coming, and Hammon’s hiring has a lot of female coaches very excited right now, including one of the greatest female coaches ever, Hall of Famer Nancy Lieberman.

“A glorious day for the NBA and an awesome day for women. The NBA has always been a leader in diversity and opportunity,” Lieberman told ABCNews.com on August 5, 2014.

Nancy Lieberman was a head coach in the NBA D-League in 2008 and is currently the GM for the Texas Legends. She knows firsthand how to coach in a man’s world.

Coaching to Lieberman isn’t a hobby, it’s her passion. Now with Becky Hammon in the coaching fraternity, Nancy is once again optimistic. “This will open the door for other women, even like myself,” Lieberman told ESPN. “My goal is to coach in the NBA and you’ve got to start somewhere. So this is a great day.”

If there was any female coach out there who could step right into an NBA team and take over as head coach, it’s Nancy Lieberman. This is a good start, not just for Lieberman, but for all female coaches out there.

According to Lieberman, former NBA commissioner David Stern once said that the NBA will have a female head coach in his lifetime. More than that, Stern even went on to say publicly in 2009 that a female player could soon play in the NBA. The latter doesn’t seem to be possible right now, but the former is now just a few steps away. That female head coach will be knocking at the NBA’s door very soon now that the barrier has been broken.

The NBA has once again proven itself to be a trailblazer in professional sports, and one worthy of emulation. It’s where amazing truly happens, just ask the ladies.