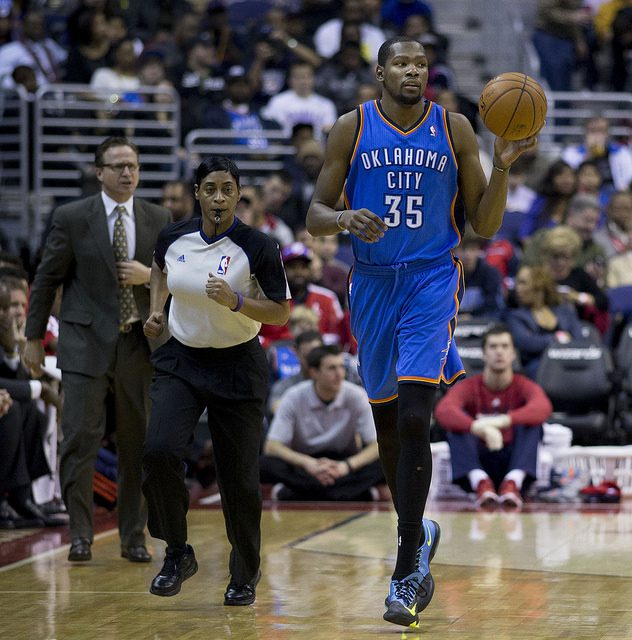 When Kevin Durant heads into free agency in 2016, teams are expected to go after him the way they went after LeBron James this summer. And why not?

James and Durant are currently the top two players in the NBA right now, with both of them battling neck and neck in last season’s MVP battle.

But if Durant does decide to forgo free agency, let us examine the early candidates for KD’s top five destinations in 2016:

According to a report by CBSSports.com on January 30, 2014, the Brooklyn Nets are planning to be one of KD’s serious bidders:

The impending Durant free agency bonanza should start picking up steam next season and will undoubtedly engulf the NBA in the summer of 2016. And make no mistake: the Nets are targeting Durant, the 25-year-old offensive juggernaut, even if it’s too early to predict their odds.”

The Nets could be committed to no salary when Durant becomes a free agent, depending on whether Deron Williams picks up his one-year option for the 2016-17 season. Everybody else is off the books.

After the offseason signings and trades, the Nets now have $9.8 million on the books from the contracts of Jarrett Jack and Bogan Bogdanovic. This excludes the team options totaling $4.8 million on Mason Plumlee and Segrey Karasev.

The point here, is aside from Deron Williams’ $22.3 millon option, the Nets’ books are wide open to sign a marquee star like Durant come 2016.

But why Brooklyn? Here’s what NYDailyNews.com reported on August 5, 2014:

The Brooklyn Nets could have a friend in Jay-Z, who once held a minority stake in the club and is currently the founder of Roc Nation, the agency that signed Durant as a client. Moreover, Jay Z hired Michael Yormark, formerly the CEO of the NHL’s Florida Panthers, to become his president and chief of branding and strategy at Roc Nation. Yormark’s twin brother, Brett, is the CEO of the Brooklyn Nets and Barclays Center.

Jay-Z may be having marital problems at the moment, but as a businessman that guy has always been a good closer. With an owner like comrade Mikhail Prokhorov, who’s willing to spend limitless dough to build a contender, the sky is the limit for the Nets in 2016.

They say that one of the main reasons Durant could be leaving OKC is market size. KD is a very marketable brand because of his low key attitude off the court and his killer moves on it. As NYDailyNews.com reports on August 5, 2014:

But teams are also planning for the possibility of Durant leaving for a larger market and many believe that they have an edge over the competition. The Knicks are coached by Durant’s former teammate Derek Fisher while club president Phil Jackson will be selling Durant on the opportunity to play alongside Carmelo Anthony.

Other than Los Angeles, the other big market in the NBA is New York with Madison Square Garden being the Mecca of the sport.

The New York Knicks’ 2014 offseason was all about re-signing Carmelo Anthony, as the team didn’t have cap space to upgrade. However, the Knicks only have Melo and Jose Calderon locked on their payroll for the 2016-17 season, and they are worth a combined $31 million.

So signing Durant in 2016 is very much possible and could be part of what the Knicks had in mind when they hired Derek Fisher as head coach earlier this summer.

“Phil Jackson and the New York Knicks believe Derek Fisher’s presence is enough to lure Kevin Durant to the Knicks in 2016. The Knicks, sources say, expect to be a contender for Oklahoma City’s Kevin Durant when he is projected to become a free agent in July 2016.”

It’s a known fact that KD and D-Fish were former teammates and good buddies. In fact, Durant made a “pitch” to Melo about the new coach in NY. As reported by NYPost.com on July 9, 2014:

“According to Yahoo! Sports, Durant offered Anthony a strong endorsement of Fisher during a workout in Los Angeles.”

If KD told Melo to stay because Fisher is going to “do well” in New York, did he give a hint that he would soon follow his good friend to the Big Apple?

Kevin Durant becomes a free agent in the same year that Kobe Bryant’s contract, and possibly his NBA career, ends. Wouldn’t getting Durant be the perfect “changing of the guard” in Hollywood?

Durant is a megastar, only rivaled by LeBro,n and it would be fitting for him to be in the bright lights of L.A. As reported by TheePochTimes.com on August 6, 2014:

“There’s been speculation that Kevin Durant, the Oklahoma City Thunder forward and last years MVP, could head to the Los Angeles Lakers. New York Post sports columnist Peter Vecsey said that if Durant leaves the Thunder, he might head to Los Angeles. “I say if Durant goes anywhere I look for him to go to the Lakers because they’re going to have a tremendous amount of money to give him. Kobe will be on the way out at that point and they won’t have anybody. A guy like him might want to start with the Lakers.”

The Los Angeles Lakers were one of the big losers during 2014 free agency. However, even before the offseason started they already said that they wanted to splurge in 2015 and 2016.

According to LakerNation.com on February 24, 2014:

“With general manager Mitch Kupchak stressing that the team does have a plan, it appears the Lakers may be targeting both Kevin Love and Kevin Durant when they become free agents in 2015 and 2016, respectively. Having said that, every team in the league will be eyeing these marquee players once they hit the open market.”

Their No. 1target is now in Cleveland, so obviously the Lakers should be going hard after the other target. The Lakers may not have anybody in 2016 except Julius Randle, if he becomes great, but that’s really the point in going to Tinseltown.

It would be starting all over again in what is probably the biggest market in America. With a star as big as Durant, there seems to be no better fit for his marketability than in the limitless cameras of Hollywood.

The theme of 2014 free agency was definitely “Coming Home,” as proven by LeBron James. In 2016, it could be that for Kevin Durant too.

In a report by ESPN.com on July 30, 2014, Durant had nothing but admiration for what King James did:

“That was pretty cool. It’s funny seeing guys think about more than just basketball for once. He thought about the city where he comes from, about Northeast Ohio and how he can affect so many of the kids just being there playing basketball. I love that. So many guys get criticized for making the decision that’s best for them, instead of what’s best for everybody else. He’s a guy that did that. You gotta respect that. I applauded him, I texted him and told him congratulations on the decision and told him I was happy for him. As a fan of the game, it’s going to be pretty cool to see him back in Cleveland.”

While Durant shrugged off insinuations that he is planning a homecoming of his own, his reaction to it pretty much sums up what he thinks about the game and about his hometown.

Remember his MVP speech? He started out by saying:

“I come from a small county outside of Washington, D.C., called P.G. County,”

Washington already has the backcourt of the future with John Wall and Bradley Beal, and that would also be a strong bargaining chip for the Washington Wizards, if the motive of “going home” is not enough.

The Wizards are expected to build on their successful 2014 campaign, and in two years that backcourt could be one of the best in the NBA. Adding Durant would make them immediate contenders.

It’s not only that for Washington. Business-wise, there has been recent rumors that Durant could be signing with the brand Under Armour in a very rich deal that could be worth $30 million per annum. If that happens, the Washington connection is strengthened, as reported by NYDailyNews.com on August 5, 2014:

“A deal with Under Armour could also be beneficial to the Washington Wizards, one of several teams, including the Knicks and Nets, putting themselves in position financially to make a run at Durant in two summers. Wizards owner Ted Leonsis and Under Armour Founder/CEO Kevin Plank, a University of Maryland graduate, have been involved in several philanthropic endeavors in the D.C. area.”

Based on these reasons, Washington is poised to become OKC’s strongest rival for the services of the ‘Slim Reaper’ in 2016.

“‘I’m going to do what’s best for me,’ Durant said. ‘It’s hard to talk about that right now when I’ve got two years left in Oklahoma City. I’m just going to focus on that. I’m not going to make a decision based on what anybody else does. I grew up watching the Bullets/Wizards. I grew up taking the train to that arena, all the time, to watch Georgetown, the Bullets, the Washington Mystics. That whole city is a part of me. It’s in my blood. I love going back home, seeing my family and playing there, but I love Oklahoma City too.’”

The success of the Oklahoma City Thunder has been synonymous to Kevin Durant. Although the partnership has not yet translated to an NBA title, the team has been one of the NBA’s elite over the past three years.

OKC has looked like they’ve been on the verge of winning it all every season in the last three years, but different injuries have plagued their key players in key situations. Russell Westbrook got hurt during the 2013 playoffs, and was also out for 37 games during the regular season of 2014. Also, Segre Ibaka missed two crucial Western Conference Finals’ games, which could have easily turned the tide to OKC against the San Antonio Spurs last postseason.

A lot of people are saying that the next two seasons are crucial for the Thunder and their current core, and that’s because of Durant’s upcoming free agency in 2016. That being said, in this time and age of players asking for max deals, shorter contracts and opt out clauses, Kevin Durant is a different breed.

“Durant has two years remaining on the five-year, $86 million extension he signed with the Thunder in summer 2010. He deliberately committed to five years in Oklahoma City, without any early termination or player options, to demonstrate his commitment to the franchise and appreciation for the city.”

Durant said this about his current contract with OKC:

“But I loved Oklahoma City so much I just wanted to dedicate and show them that I’m all about the team.”

It’s this kind of attitude that makes us wonder if he’ll ever leave OKC. It’s still two years away, and a lot of things could change, but it’s most probable that Kevin Durant will rise together with the Thunder for the remainder of his career.