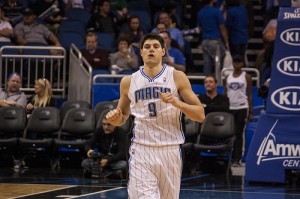 As a part of the NBA Global Games, the Orlando Magic hosted Brazilian powerhouse, Flamengo, in its 2014-15 preseason home opener. To a delightful surprise, a large contingent of Flamengo fans were present, much more than there were Magic fans. However, that wasn’t enough as the Magic would go on to rout Flamengo 106-88.

Making his preseason debut, Willie Green helped the Magic get off to a quick start in the first quarter, scoring six of his 11 points early on. The Magic were able to gash Flamengo in the paint, going 11-of-16 for 22 of it’s 34 first quarter points.

Flamengo would find its shooting touch. Led by Marcelinho Machado who had 15, the team would go on to cut the Magic lead down to 55-59 heading into the break. Nikola Vucevic led all Magic players with 13 going into halftime.

Both teams would trade buckets coming out of halftime with the Magic getting outscored 16-6 scoring in the paint. However, thanks to some strong play by Luke Ridnour and Vucevic, the Magic would begin to pull away from its Brazilian visitors, ballooning the lead to 12. The Magic lead Flamengo 84-72 heading into the fourth.

Victory was all but a few minutes away for the Magic as the would blow the game wide open, pushing their lead to as many as 21 before the game’s end.

Nikola Vucevic, who has been very impressive in 4 preseason games, led all players on the Magic with a double-double of 20 points and 11 rebounds. 2014 4th overall pick, Aaron Gordon, had a preseason high 15 points with Tobias Harris finishing with 14. Magic veterans, Luke Ridnour and Willie Green, had 11 points with Andrew Nicholson coming in with 10 points in his first start of the preseason.

Marcelinho Machado led Flamengo with 20 points followed by Nicolas Laporovittola who had 15. Jerome Meyinsse finished with 13, and Marquinhos Olivinha had 11.