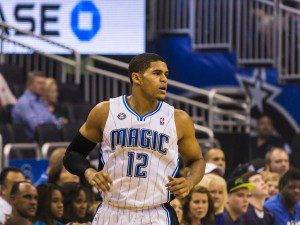 The Orlando Magic and Philadelphia 76ers entered last night’s game winless and desperate to right the situation, although one could say the 76ers were looking for a loss. Coming off a tough game against the Chicago Bulls, the Magic were going to be in for a long night.

Orlando got off to a good start in the first quarter, using their up-tempo style to torch the 76ers. With Elfrid Payton leading the charge, the Magic scored nine fast break points. For every positive, there was a negative as the Magic had troubles taking care of the ball once again. The Magic turned the ball over nine times in the opening quarter. Tony Wroten for the 76ers continued his stellar play, scoring 11 points in the period. Nikola Vucevic led all Magic players with eight points on 4-of-5 shooting.

Turnovers continued to haunt the Magic. Looking burned-out and playing just a step behind the 76ers, the Magic turned the ball over eight more times in the second period. The Magic also struggled shooting the ball from deep as the first three-pointer wasn’t made until Channing Frye knocked one down late in the second. The 76ers, meanwhile, just seemed to knock them down with ease. Vucevic led the Magic with 12, while Wroten led with 15 heading in the half.

An unsung hero would emerge for the Magic as Ben Gordon knocked down big shot after big shot to help Magic gain the upper hand. Tony Wroten would not be denied as he led the 76ers on a 10-2 run to grab a two-point lead on the Magic. Then Elfrid Payton emerged. Refusing to give up, Payton tied the game up at 87, then forced Tony Wroten to commit a huge backcourt violation. He would then find Tobias Harris for an easy two, putting the Magic up 89-87. Henry Sims would then knock down a game-tying jumper to even the game up at 89. With just mere seconds left, Fournier found Harris coming off a Channing Frye screen, and buried the 76ers for good on a game-winning two-pointer.

Tobias Harris led the Magic with 18 points and eight rebounds. Vucevic’s streak of four consecutive double-double games came to an end as he finished with 17 points and five rebounds. Channing Frye notched his first double-double since the 2011-12 season with 13 points, 11 rebounds. Ben Gordon scored 15 off the bench, and Evan Fournier finished the game with 10.

The Magic head back to Orlando to face Andrew Wiggins and the Minnesota Timberwolves on Friday.