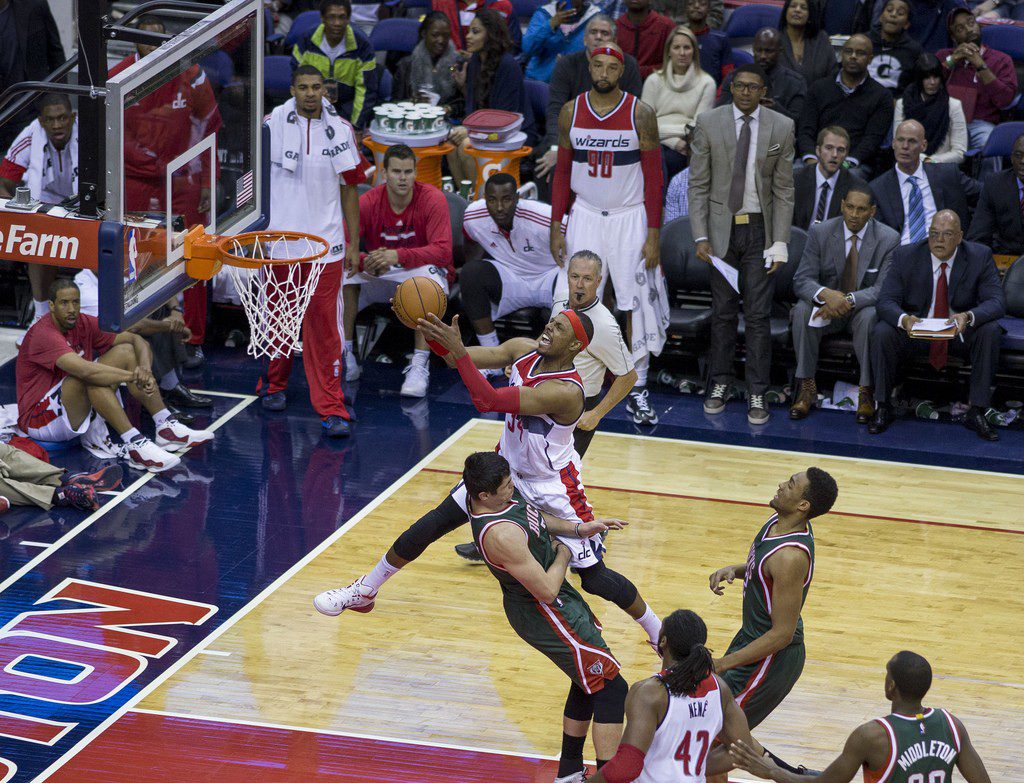 He is one of the most heralded basketball players of our generation, his tenacity and leadership on the court have guided the likes of the Boston Celtics, Brooklyn Nets, and now the Washington Wizards. Paul Pierce was born in Oakland, California and was cut from his high school varsity basketball team his freshman and sophomore years. Not letting this deter him from the sport he loved, he would go on to become a McDonald’s High School All-American, Big 12 Conference MVP at the University of Kansas, and the 10th overall pick in the 1998 NBA Draft.

Pierce is a unique blend of pure shooting ability and on-court trickery. Now in the twilight of his career he looks to help lead a talented Wizards squad to the promised land of an NBA Championship.

The “Truth,” as Pierce is referred to, is a nickname that was given to him by former NBA superstar Shaquille O’Neal in 2001 after Pierce scored 42 points on 13-of-19 shooting against the Los Angeles Lakers. Following the performance Shaq proclaimed to a reporter that, “I knew he could play, but not like this. Paul Pierce is the truth.”

In his NBA career Pierce has averaged 21.3 points per game, 5.9 rebounds, and 44 percent shooting from the field. He led the Boston Celtics to an NBA championship in 2008, earning MVP honors in the process. Last season Pierce showed great resolve during the Brooklyn Nets playoff run by being a vocal leader and leading the Nets to the second round of the Eastern Conference playoffs. During that season he scored his 25,000th point, becoming only the fourth other active player to achieve that milestone.

With the 2014-2015 NBA regular season underway, Pierce has helped lead the Washington Wizards to 5-2 record albeit against a soft schedule. Pierce is averaging just shy of 12 points per game and is leading all starting players in free throw percentage at 86 percent.

Sometimes the longtivity of a NBA career comes down to the fundamentals, which Pierce has shown mastery of throughout his career. He has an excellent pump fake and is able to create space around him to get his shot off with a truly original motion; his skilled footwork makes it seem as if he is playing the game in slow motion. It is hard to keep track of where he is going on the court, which frees up space for teammates John Wall, Nene Hilario, and Marcin Gortat. Even though his speed has decreased Pierce still is able to utilize his unique movements to score the basketball.

With his new two-year, $11 million dollar contract with the Washington Wizards the younger players around him will look to Pierce’s leadership and experience for guidance to help build their own NBA careers. Talented players who can score the basketball like Otto Porter, Glen Rice, and Bradley Beal can lean on Pierce as a mentor to further develop their individual skill sets. “When I look at the Eastern Conference, we can be right up there with the rest of them,” Pierce noted in an early season report. With undeniable swagger, the future NBA Hall of Famer will look to continue to be the Truth this season in Washington.