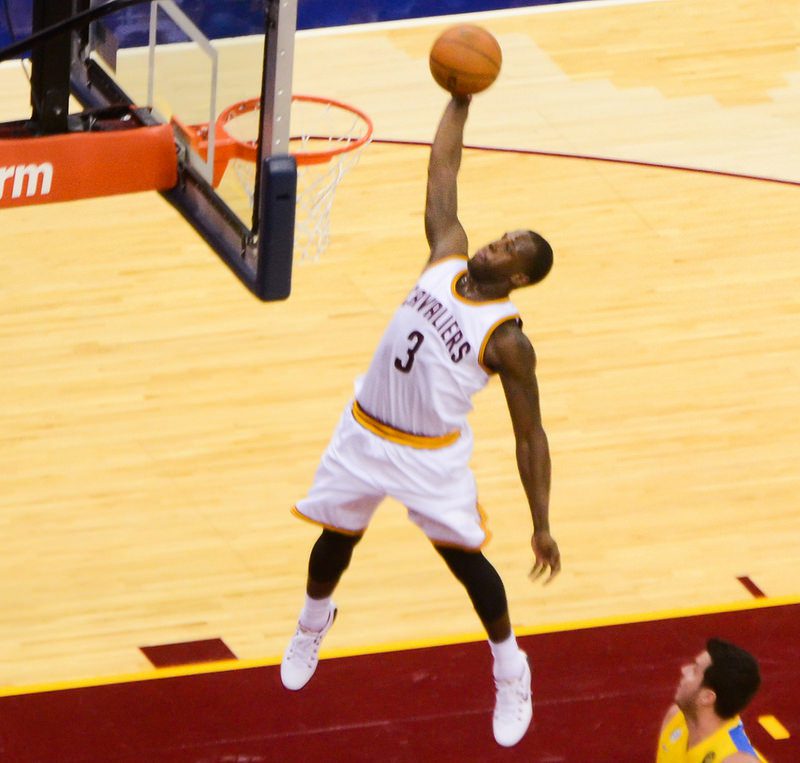 The trade reported earlier involving CLE, NYK, and OKC has been made official. Who won the trade? pic.twitter.com/E5KoRxG30f via @NBAITK

Many fans believe that each team will benefit from this trade: the Knicks got cap space, the Thunder added talent to their backcourt, and the Cavaliers got two rotation players plus a protected future first-round pick. Each team got something they wanted but there are some obvious drawbacks for all involved as well.

The Cavaliers traded one malcontent for another by going from Dion Waiters to J.R. Smith.

Both players have loads of talent and poor shot selection. It’s a wash.

Iman Shumpert is known as a solid perimeter defender which supposedly fits a need for the Cavaliers (Shawn Marion can defend, but his shot seems to have left him, shrug). The problem is that the larger void was finding a suitable replacement for Anderson Varejao who suffered a torn Achilles and will be out for the rest of the season (hell, they needed another big man before he went out). Without another big man, Kevin Love will be forced to play minutes at center where his porous defense will be further exposed. Waiters was the Cavs’ lone, desirable asset after deciding to trade for Love before the season started so an impact big man is almost completely out of reach for the remainder of the season.

The protected first-round pick from the Thunder is nice, but does nothing for this season which determines the future of this franchise for years to come.

In the best case scenario, Smith plays up and down basketball, as usual, and doesn’t complain about touches, Shumpert remains healthy and provides perimeter defense, and the rest of the Cavaliers already crowded backcourt falls in line.

Cap space – the path from the Purgatory of Irrelevance to the Promised Land where front offices may lay in promiscuity with the best free agents of Midgard. Oh wait, that’s if you aren’t the worst team in the league and begging your superstar player to sit out so you can lose more games. Who wouldn’t want to sign to a team like that?

Carmelo Anthony has been resisting idea of resting that sore knee, but Knicks have been encouraging him to sit, league sources tell Yahoo.

The Knicks literally only did this move for additional cap space while adding no impact player or assets. Desirable unrestricted free agents are not enticed by a team with a bunch of cap room and no foundation. Even Josh Smith had championship aspirations when he was released by the Detroit Pistons two weeks ago.

Fans of the Knickerbockers have spent the entire 21st century being satiated about amazing things on the horizon for next season.

Can someone tell Sam Presti that he’s on the clock? Kevin Durant isn’t walking out the door tomorrow, but the likelihood of him staying around if the Thunder can’t make it back to the Finals are pretty slim. The time to win is now, not later. Making contingency plans for the possibility of Reggie Jackson leaving in free agency this summer by trading for Dion Waiters seems short sighted.

The Thunder’s second unit is not a strong scoring bunch which could be said about nearly every team in the league. Reggie Jackson has been a strong sixth man with the Thunder, and kept the team afloat when Durant and Westbrook were out with injuries. The addition of Waiters adds talent but this seems like a disaster waiting to happen. Waiters likely wants a larger role than he had with the Cavaliers despite hearing from LeBron James and Kyrie Irving. Some of these 2014 headlines from Cleveland.com are literal writing on the wall.

LeBron James likes Dion Waiters as the team’s sixth man and Waiters is beginning to embrace it – November 9, 2014

On December 26, 2014, the Cavaliers were playing the Orlando Magic when this happened.

Remember, Waiters was even mentioned LeBron’s homecoming letter. Less than three months into the season, James decided that a guy he really liked wasn’t worth the trouble anymore. Waiters could play nicer with the Thunder although it would go against everything he has done so far in his young career.

The Thunder now have three, high volume, shoot-first combo guards – Russell Westbrook, Reggie Jackson, and Dion Waiters. They can’t all be on the floor at the same time. It took Scott Brooks four years to take Kendrink Perkins out of the starting line. I can’t imagine the anxiety he must feel about this current situation. Adding big time talent without finding minutes for the player is problematic in any situation. Some have argued that Waiters is insurance in case Westbrook gets hurt again which makes sense, but what does Waiters do while guys are healthy?

The biggest problem with this trade is that it doesn’t help the Thunder against any contender in the West. Waiters is not playing ahead of the playoff tested Jackson, and his only real contribution is scoring, a relative strength for the Thunder. He doesn’t rebound well, refuses to distribute the ball, and plays average to below-average defense. The acquisition of Waiters would make sense on a lot of teams like the Memphis Grizzlies who need perimeter scoring, but that’s not the situation for the Thunder.

Waiters is basically another example of the Oklahoma City Penny Pinchers saving money (cap space, the maniacal fiend returns). Waiters’ contract expires next year at $5.1 million next year. Jackson wants a big pay raise (being paid $3.2 million this season) after his contract expires this season and the Thunder were unable to agree on an extension with him. Waiters is Jackson’s replacement and everyone knows it. That’s not awkward at all.

Additionally, Waiters is going to ask for an extension also – how long can the Thunder kick the can down the road?

The summer of 2016 is right around the corner yet the Thunder are acting like they have forever to figure things out while staying under the cap.