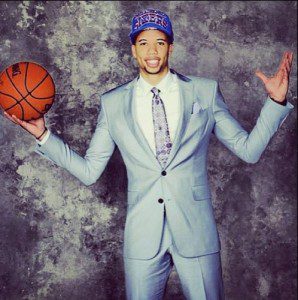 The Milwaukee Bucks, Philadelphia 76ers and Phoenix Suns have agreed to a three-team trade that would send Brandon Knight to Phoenix, Michael Carter-Williams, Miles Plumlee and Tyler Ennis to Milwaukee and draft picks to Philadelphia, a source told ESPN’s Marc Stein.

Carter-Williams, the reigning rookie of the year, has struggled from long range this season. He has the second-worst three-point percentage among those who have taken at least 100 3’s (25.6 percent) and the third-lowest effective field goal percentage of anyone taking at least 10 shots per game

I can’t lie I’m shocked. I love this city thank you for everything. I can honestly say I gave it my all. I wish Philly nothing but the best