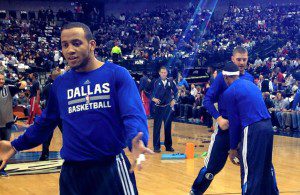 After dropping a close game to the Houston Rockets on Tuesday, the Orlando Magic traveled to Dallas to face the Mavericks in what would be their only nationally televised game of the season. Things started out bad and got worse throughout the game until the finally Magic began to put together a comeback. However; they would fall short once again, losing 107-102.

Things got off to a pretty rough start for Orlando. They couldn’t get anything to go on offense and looked lost early on compared to their opponent who were moving the ball well and getting good looks from their offense, helping them to a 12-0 start. After coach Borrego calmed the troops down, the Magic began to find some rhythm. With a few made layups and jump shots by Victor Oladipo, Nikola Vucevic, and Elfrid Payton, the Magic managed to get within as few as five before the Mavs pushed their lead to eight at the end of the first. Magic trailed 31-23.

Orlando stayed within striking distance of the Mavs throughout the second quarter, but just couldn’t get stops to really put pressure on them. Although the Magic forced them into 12 turnovers, they committed 11 turnovers themselves. The Mavs continued to score at an efficient rate, lead by Monta Ellis, who only missed one shot for 17 points in the entire first half. The Mavs managed to keep a steady double-digit lead and was even able to extend their lead to 17 heading into the half. Orlando trailed 65-48 going into halftime.

Out of halftime, longtime Magic nemesis, Dirk Nowitzki, pushed the Mavs to their highest lead on the night of 22 points. Orlando could’ve folded at that point, but would instead begin a methodical comeback. Slowly but surely, the Magic were able to get themselves back in the game with Oladipo, Payton, and Maurice Harkless leading the charge. Once down 22, the Magic were able to cut that deficit in half before Devin Harris and Nowitzki made a few threes to get back up  by 18. A missed free-throw and tip-in later, the Magic would go into the final quarter trailing 86-70

In the fourth, the Magic would turn things up a notch. With strong defensive effort, Orlando was able to chip even more into the Mavs lead. With a couple of threes, the Magic were then down by single digits. Oladipo, Harkless, and Payton would soon get the Magic to within as many as one point of the Mavs. However, youthful inexperience would come into play. With the ball and a chance to take the lead, Elfrid Payton took a bad shot and was forced to foul after Devin Harris came away with the rebound. After pushing the lead to three, the Magic had one more shot to tie the game. Oladipo would shoot wide left, and effectively sealed the win for the Mavs.

Dirk Nowitzki led the Dallas Mavericks with 25 points, followed by Monta Ellis with 21. Devin Harris and Charlie Villanueva both had 12 and 10 points off the bench respectively. Rajon Rondo didn’t score in double digits, but did dish out 11 assists.

For the Orlando Magic, Victor Oladipo led the team with 19 points. Maurice Harkless, who started in place of Tobias Harris, had 18 points. Elfrid Payton earned his first career triple-double with 15 points, 12 assists, and 10 rebounds. Nikola Vucevic had 12 points, and Channing Frye finished with 11