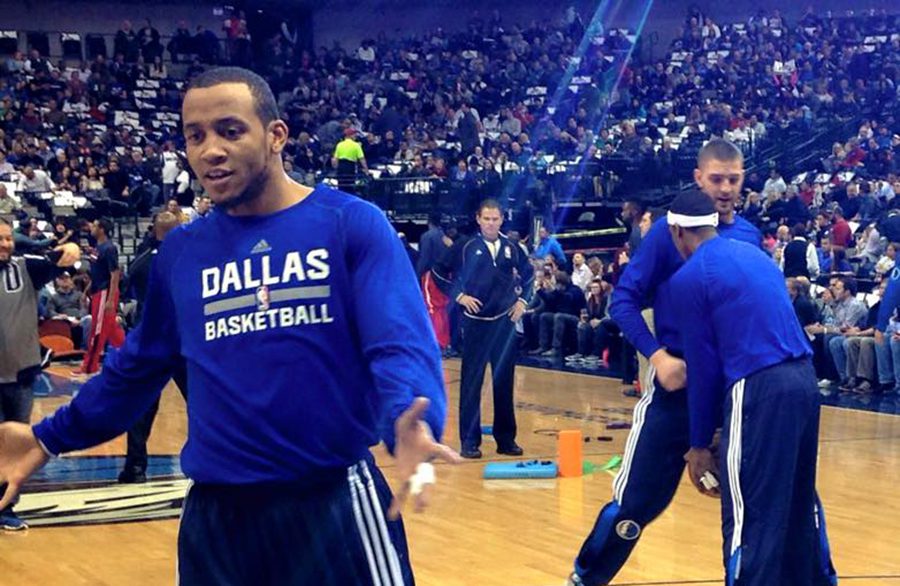 Southern hospitality is a peculiar thing. Even if two neighbors are in the throes of a brutal slap-fest fight over tree branches in their yard, they’ll stop long enough to wave at a passing jogger, the sweet honey-nectar Texas accent dripping from their mouths as they call out “Howdy!”. Being a Californian well out of my natural douche-hat habitat, I was often easily spooked by this and didn’t know how to respond accordingly, so I debated wearing a running shirt that said “Don’t Bother – I’m From California” or simply one that read “A**Hole” so that the natives wouldn’t bother me with their bewildering and puzzling kindness.

What they failed to explain in the travel manual is that, aside from fickle weather, Texas can turn into a very bipolar state when playoffs roll around. And to be clear, playoffs in any and all sports.

Smelling blood, the natives shift, and suddenly the county lines are divided. When two Texans representing either side of the war collide, southern hospitality swan dives out the window and it turns into an all out spilling guts fight worthy of a chapter in a George R.R. Martin novel. This puts a temporary stop to the friendly waves.

On Wednesday evening, the stars aligned when the New Orleans Pelicans defeated the San Antonio Spurs, which did the job of both knocking the Oklahoma City Thunder out of playoff contention and assuring that the Spurs would not lock down that second seed spot. The Dallas Mavericks, who had already secured the seventh seed position, had their eyes anxiously glued to the scoreboard as they fought off the Portland Trail Blazers for their 50th win of the season, curiously pondering on who would win that second seed and be their rebarbative dueling opponent.

Enter the Houston Rockets. The very Houston Rockets that managed to twist the knife a little deeper into Dallas’ side during the course of the regular season. The very Houston Rockets who started a war a couple years ago by openly coveting after power forward, and face of the Mavericks franchise, Dirk Nowitzki, only to have their golden boy Chandler Parsons ripped from their clutches by owner Mark Cuban a year later. Retaliation is a odd bitch. Despite the curious rivalry, Dallas and Houston have only faced each other in the playoffs a whopping two times (2005, 1988 – Dallas won both times), so this third time, the heat and friction between the two cities should be so intense that there will be absolutely no need to stock up on the Viagra usually locked up behind the counter at HEB pharmacies.

Once the playoff teams were all firmly locked into place, I took to picking the brains of my Texas native friends and a few brilliant and successful Texas born sports writers in order to map out this preview from all angles. Unfortunately, I discovered that the language barrier between the natives and I was limited – these interesting Texans were not only bias of their respective teams, but they didn’t speak fluent douchebag. So, quite naturally, I spoke to two of my California bros in order to have a serious debate on the upcoming first round between these fascinating Texas teams. Take note that these gentlemen are not in the sports field themselves, though both have a strong background in screaming at their television sets. Enter Marce and Brandon, the only two of my male friends who are allowed to relentlessly mock me in group text and take my money when Fantasy Football season rolls around. Here’s is how the text went…

TJ: Marce, you think Houston will take the series in how many games? Brandon, you too.
Marce: Not answering that until I get some financial compensation.
Brandon: I have Houston in… what Marce said.
TJ: Answer, bitch.
Brandon: Houston in five.
Marce: Is Parsons playing?
TJ: Yes.
Marce: In that case, Houston in four.
Brandon: Marce originally had Houston in three with Dallas forfeiting Game 4.

During the course of the season, I had commonly debated with both men regarding the position of the Mavericks and where they will stand once the playoffs rolled around, and more recently what Dallas’ fate would be if they faced the Rockets. Even though I’m an outsider in this unusual state, I had began to sip the Mavericks’ kool-aid after being allowed to observe and interact with the team on an almost daily basis, so to hear from two idiots who spoke my language was a refreshing course.

TJ’s Take: Mavericks In Seven
When running on all cylinders, the Mavericks are fatal. Last year, the odds were stacked against them and were expected by professionals to be swept by the Spurs during the first round of the playoffs. However, they were the only team to give the Champions a serious run for their money by taking them all the way to Game 7 before bending over in that final match. Cuban spent the offseason collecting trinkets of future playoff destiny, Parsons and Tyson Chandler most notably. The waters were somewhat muddled with the December addition of Rajon Rondo, who’s defensive presence only hurt the powerful offense. It took months before Rondo started getting comfortable in Mavericks blue and, with the aid of a very underrated X-factor, his own shot.

X-Factor: Holger Geschwindner… oh, and Chandler Parsons
Most people outside state lines don’t usually know Geschwindner’s name or haven’t heard it dropped in casual conversation, however, he is one of the most powerful faces behind the franchise. Holger has been Nowitzki’s mentor since the power forward was 16 years old and runs a basketball academy in Wurzburg, Germany. He often flies out to Dallas when Dirk’s shot is on the fritz in order to spend hours with him on the court, before, after, and during practices.

The Dallas media has often joked (most notably SB Nation’s Mavs Moneyball) that someone should look into stealing Geshwindner’s passport in order to keep him grounded in Big D. As of late, he’s taken to molding Rondo’s midrange and perimeter shooting, the weak spot in former All-Star’s maddening game (26.1 percent career perimeter shooting and 31.1 percent from the free point line this season alone. When Rondo goes to the line, the audience knows to duck). Since working with Geschwindner, Rondo has become more confident in his shooting ability, which seamlessly affects the flow on the floor and the much needed offensive trust of his teammates.

At practice on Friday, Parsons, who has sat out during the last stretch of the regular season with a sore knee, announced he would start Game 1 (whew!). However, it remains to be seen how he’ll perform. Offensively, he has the capability to be a predator missile, but if he’s gingerly working the court, the Mavs will be tossed.

Marce’s Take: Houston In Four
It’s quite commonly known that Houston has one of the scariest defenses in the league while leaning rather heavily on James Harden on the offensive end of the court. On paper, they’re the better team, even without Donatas Motiejunas and Patrick Beverly. Dallas lacks in the defense department and the argument presented is that Monta Ellis and Rondo will have their hands full trying to contain Harden for one game much less seven. Houston kicked Dallas’ ass during the regular season series (3-1), however, the three the Rockets took were extremely close and could have gone either way while the one the Mavs grabbed leaned heavily in their favor. If Dallas head coach and chessmaster Rick Carlisle works his magic, it is a definite possibility that the Mavs could outwit the Rockets on the court by figuring out a solid way to cover Harden.

X-Factor: James Harden… or Dirk Nowitzki if he’s in prime playoff form
Harden’s stats against Dallas speaks for itself. He tends to dance all over the defense, so it was clear to Marce, and the entire nation, that he will be the downfall of the Mavericks playoff race. Though he made it clear that in order for the Mavericks to stand a chance, the Big German needs to be at the top of his game (Oh, he’s ready).

Brandon’s Take: Houston In Five
Without Parsons at 100 percent, this outcome can be a likely scenario. Richard Jefferson has been a decent replacement in the starting lineup, but decent isn’t going to cut it when facing Houston.

X-Factor: “Both of you, shut the hell up. You’re wasting my battery. Mavs suck and Dwight Howard blows.”
Apparently, Brandon needs to carry a charger and not cross paths with Dwight Howard.

I expect that the series between the two Texas cities to be an enthusiastic nail biter and an all around enjoyable experience as I sit back and watch the natives in blue clash with the natives in red and dread the time where I have go back to randomly waving at total strangers on my morning run.