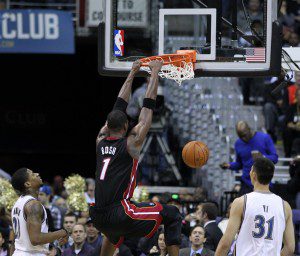 As the Cleveland Cavaliers and Golden State Warriors stand poised for Thursday’s opener of the NBA Finals, a series that had featured the Heat the past four seasons, the Heat have welcomed center Chris Bosh back to their offseason workouts.

Bosh has resumed court work for the first time since being sidelined at the February All-Star break due to blood clots on his lung, working Tuesday with coach Erik Spoelstra, assistant coach David Fizdale, among others.

Back from a recent vacation in South America, Bosh has joined others drilling at on the Heat’s practice court, including Shabazz Napier, James Ennis and Hassan Whiteside, with Zoran Dragic recently returning to also join the sessions. South Florida Sun-Sentinel