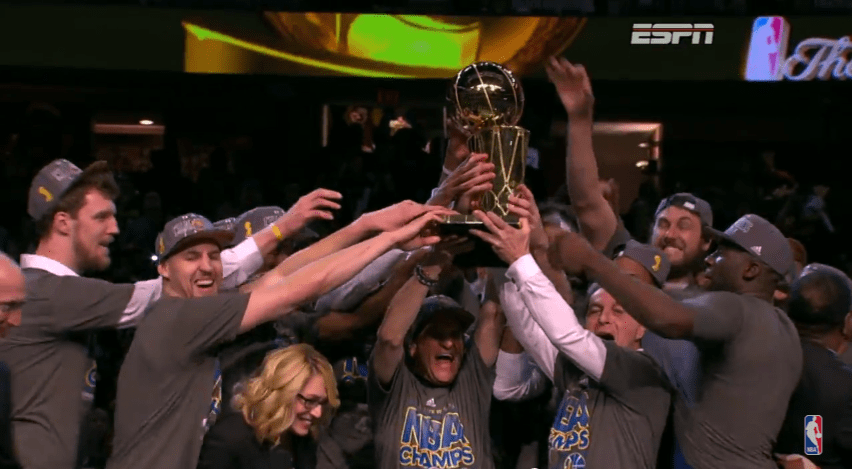 Screen capture courtesy of the NBA/Youtube

Having the gall to change your lineup in the NBA Finals despite winning 67 regular-season games deserves an award in and of itself. Then why not the Larry O’Brien Trophy?

With the Golden State Warriors struggling early in the series against the Cleveland Cavaliers, Warriors head coach had no choice but to remove Andrew Bogut from the lineup and replace him with Andre Iguodala. Iguodala, who had not started a regular season game, proved his worth by scoring when Stephen Curry and Klay Thompson struggled.

But LeBron James was on a quest to not only become NBA Champion, but become Finals MVP as well. It would have been his third championship in four years, but the first in his hometown of Cleveland.

With a depleted roster backing him, that idea metamorphosed into one of the G.O.A.T in the losing team. Would LeBron James be only the second player in the history of the NBA to win Finals MVP despite not winning the NBA Finals? The only other player to accomplish the impressive, yet seemingly absurd feat was Lakers legend Jerry West. The Logo did this 46 years ago in 1969.

Much to the chagrin of many basketball fans who were adamant about this, this year’s Finals MVP eventually went to Andre Iguodala. After all, him moving from the bench to the starting lineup reinvigorated the team which allowed the Warriors to dominate using smallball. Players like Timofey Mozgov and Tristan Thompson were able to get their typical stat lines, but the Warriors’ tempo proved too much for the Cavs as a whole. An interesting note: Iguodala and James were the only two players two receive MVP votes.

What’s more, the Cavaliers finally dug themselves into a whole they couldn’t dig out of with their paltry shooting percentage in Game 6, shooting just 39 percent and making six three-pointers out of 26 attempts. The Cavaliers did manage to stay in the game throughout by crashing the boards and taking advantage of the Warriors’ smaller lineup. Cleveland grabbed 56 rebounds in Game 6, compared to the Warriors’ 39.

Golden State didn’t seem phased by that, however; if anything, the Cavs fell right into Kerr’s plan given their poor shooting night. They dared them to shoot as much as possible and it paid dividends. J.R. Smith is a microcosm of Kerr’s strategy. Despite tallying 19 in the losing effort, he went 5-15 and struggled to find his rhythm until it was too late in the fourth quarter to cut the deficit.

Both Steph Curry and Andre Iguodala led the way with 25 points apiece, which started in the first quarter. Cleveland started off strong with a 7-2 lead, but a few fouls halted their momentum. With the momentum in flux, Iggy dished out a pass that resulted in an easy layup for Curry to tie the game. After that the Warriors went on an assertive run, which only exacerbated Cleveland’s hopes of winning once LeBron sat for the final minutes of the quarter.

Though the Warriors seemed infallible throughout most of the season and the playoffs, not everyone had a quintessential fairytale ending. Klay Thompson had a poor performance in the concluding Game 6, scoring only five points off 2-7 shooting, due to early foul trouble. Thompson would foul out later in the game, but gladly sat on the bench, knowing that the Larry O’Brien was within reach.

Congratulations to the Golden State Warriors, the 2015 NBA Champions.