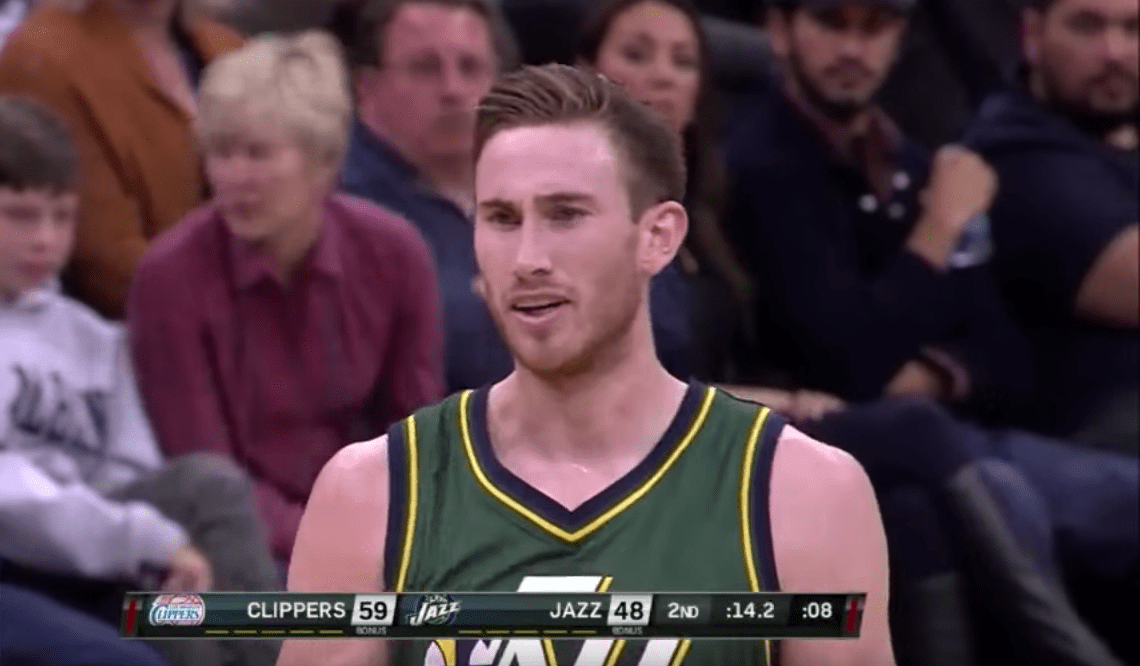 There will probably be quite a few people who aren’t totally on board with Gordon Hayward‘s inclusion in the Top 30 of this countdown. And honestly, I understand why. If you aren’t a League Pass subscriber then you could have caught Gordon Hayward’s Utah Jazz a grand total of three times on national television. It’s a good thing you were able to watch the Los Angeles Lakers 28 times, though.

For a good portion of the season you probably wouldn’t have wanted to watch the Jazz anyway. Defensive phenom Rudy Gobert was buried on the bench behind Enes Kanter (what?) for half of the season and neither of Utah’s two go-to scorers, Derrick Favors or Hayward, have been labeled “stars.” This will eventually have to change if Utah is going to make the next step; the step to contention in the bloodbath that is the Western Conference.

Defense will be Utah’s M.O. Over a half a season sample size they defended at a mind-bogglingly elite level; Utah’s defensive rating in the 29 games played after the All-Star break extended over an entire 82 game season would have been the best the league has seen since the 03-04 San Antonio Spurs. It’s doubtful that for an entire season they will be able to defend at that level for 82 games, but it’s not far-fetched to think that Utah could be the best in the league in that department for the foreseeable future.

For Utah to make the leap, it will have to be Hayward who ups his game. Favors can only do so much working with limited space in the post, so the burden is on Hayward’s shoulders to get Utah over the hump. Fortunately for Jazz fans, a Hayward leap isn’t out of the question. On an individual level, he’s still not quite there defensively but as long as he doesn’t regress there isn’t any reason for concern, especially with a giant Frenchman playing behind him.

The Jazz don’t need Hayward to be an All-NBA defender, but they do need him to remain a more consistent scoring threat than he was in the past. Part of that has to do with off-season work that Hayward has put in. He’s gotten stronger in the upper body, a transformation that has allowed him to absorb contact and finish better than he has in the past. Per Basketball-Reference, finished on 36 of 184 “and-1” attempts, a better rate than the undisputed Getting Fouled In The Act of Shooting champion, James Harden, who converted on 50 of his 318 attempts.

Hayward has also worked his jump shot into a more efficient and consistent weapon. Hayward’s shooting percentage from both mid-range and long distance saw huge improvement last season, per Basketball-Reference. Some of this has to do with Quin Snyder’s system, which has helped Hayward get more open looks than he had been afforded in the past, but all the credit can’t be given to the coaching. Hayward is the one who has put in the work and become a better all-around player than most people expected he would when he left Butler University early.

It was Hayward’s half-court heave that nearly defeated Duke in the 2010 National Championship game, but Hayward’s pro prospects felt similar to those of someone like Shane Battier or Mike Dunleavy Jr. At best, Hayward probably projected to max out as a lanky, gritty league-average wing who could knock down open shots and maybe get under the skin of opponents.

Hayward is not as big of a pest as either of the Duke alums, but he does play hard and play smart. Unlike Battier, Dunleavy or many other good players in the league, Hayward is also capable of carrying an offense that has at least one other consistent scoring option. He can bail out his team when the offense breaks down because he can score off the bounce, and he’s able to create good scoring opportunities for teammates; all marks of a player who is at the very least on the cusp of superstardom. It’s not a guarantee that he’ll get there, but Hayward is close to that break. If you can, try to watch the Jazz one of the three times they’re on TV this year. What a joke.