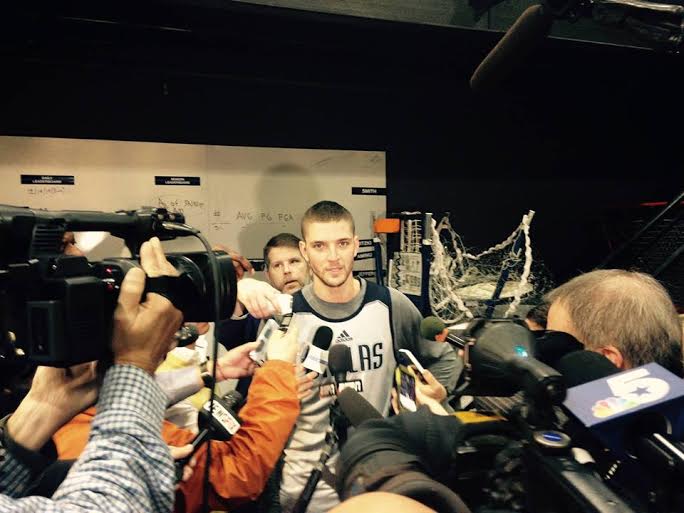 Crammed between Game 5 of the World Series and an NFL football match up between two undefeated teams, was it difficult for Twitter to sniff out handsomeness at the Staples Center on Sunday night?

Why, no. No it certainly was not.

In the middle of a sports vortex, Dallas Mavericks small forward Chandler Parsons rose like a phoenix from the ashes – a pretty phoenix, of course – as his team dominated old man Kobe Bryant and his Los Angeles Lakers 101-91, a win that catapulted head coach Rick Carlisle into Mavericks history.

Although they seemed to make it look easy with their win over the Phoenix Suns last week (before their devastating loss to the evil Los Angeles Clippers), the Mavericks’ face-value without Parsons hasn’t been too high. Parsons had been out since undergoing right knee surgery and made his season debut with a startling performance that included…

Okay, well at least his presence boosted the morale of his teammates, who danced all over the pesky Lakers. Dirk Nowitzki collected 25 points and nine rebounds (he even dunked, ladies and gentlemen – YES YOU READ THAT RIGHT, DUNKED. Such a rare treat for Mavs fans) followed by Zaza Pachulia’s 16 points and 12 rebounds. Both Deron Williams and Wesley Matthews returned to the starting lineup after one-game absences and added 11 points (Williams) and 10 points (Matthews) to the final score.

Although it’s not a huge surprise to those who paid close attention to him last year and during the post season, Raymond Felton proved to be more perdurable than most and put up 11-points off the bench.

It was a full 7:32 into the first quarter before the Lakers were able to get up on the board, thanks to a three by Bryant himself. However, they had only watched helplessly as Dallas went on a 15-0 to open up the game. It was Julius Randle who managed to carry LA on his back and attempted to keep them in the game. By the half, LA was only trailing 54-45.

They gave the Mavs somewhat of a scare in the third by cutting the deficit to 64-57, but the visitors managed to dance out of reach and ended the quarter by going on a 17-7 run.

Although they managed to sneak up and pull within six points in the final minutes of the game, the Lakers were handed their third straight loss by the end of the night.

Coach Carlisle made franchise history with his 340 career coaching win in Dallas, passing Don Nelson, who had 339 wins.

Dallas heads back to the American Airlines Center to face the Toronto Raptors in their home debut on Tuesday.