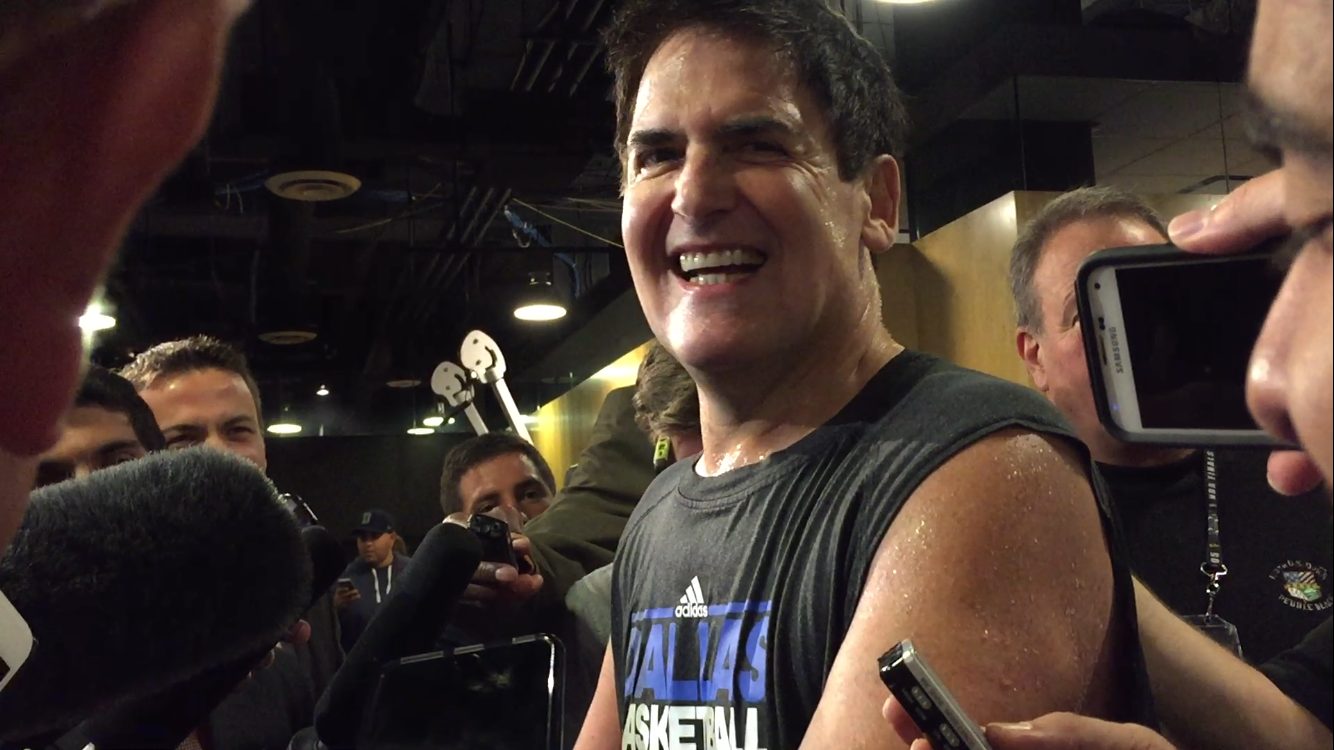 First and foremost, we need to discuss this:

The fact that I’ve gone a few days without addressing this shows how big of a tool I can be all of the time. Better yet, it shows just how errant ESPN can actually be. Who knew Dallas Mavericks owner Mark Cuban and Los Angeles Clippers starting center and part-time anti-christ DeAndre Jordan had such sexual chemistry? THANKS FOR NOT SO SUBTLETY POINTING THAT OUT TO US WITH THIS PSEUDO VERITABLE PROMO, ESPN, YOU’RE THE BEE’S KNEES. Set to a hypnotic tune that most 40-somethings awkwardly slow swayed to at their 8th grade dance (Phil Collins’ “Against All Odds”), we are presented with sad/angry/bitter/constipated looking Mark Cuban in his natural element (fucking screaming like a boss) while a jubilant Jordan mocks slo-mo images of Cuban, Dirk Nowitzki, and a sullen looking Chandler Parsons with his shifty eyes, and presses his body against teammate and work-wife Chris Paul as he lovingly cups the back of his tiny head. You can cut the tension with a knife.

Luckily for us members of the Dallas press, as we trotted into the locker room’s gym and were presented with a shower of billionaire sweat, we were allowed to witness Cuban watching the promo for the first time as he worked-out on a stair climber.

“Weak,” Cuban laughed as he watched it with a Cheshire cat grin.

And weakness was all the Clippers had to offer up on that fatal Wednesday night when Jordan faced the very fans he jilted back in July when he went back on his word to sign with the Mavericks. It’s been all anyone has been able to talk about, which is probably why Mavericks head coach Rick Carlisle walked into the pre-game presser wearing a vapid expression that read “which one of you media bottom feeders are gonna ask me the same exact question I’ve heard a bazillion times?”.

Cuban, of course, was more like a kid on Christmas morning as the joked around with the press while making sly comments that only a man like Cubes could get away with:

“I have fun messing with it (the DeAndre situation) you know, without any question. It’s not that I’m mad or pissed off or bitter – you like to fuck with me, I’ll fuck with you back. That’s just my nature so I’m just having fun with it.”

(When some dude asked if he’s seen Jordan since the incident – seriously, it was asked – Cuban donned his usual sarcastic veil) “Yeah, we hung out, had breakfast a few times. Saw him in a commercial, but I wasn’t sure who it was.”

(When asked if he’ll join in on the booing) “It’s hard from where I’m sitting, but if he falls in front of me, I’ll step on him or something, I dunno.”

So much hype surrounded this meeting. So many fan tears. So many insults. So many goddamn emojis. Months of foreplay led up to this gigantic release of tension within the desperate wails of Mavericks fans as they loudly heckled Jordan when he took to the court.

“We knew there was going to be really good energy in the building tonight,” Carlisle said in the post game presser. “I was concerned with the early start because we’re a late start town, but the fans got here early and we had good energy from start to finish.”

Other than fan energy fueled by rigorous taunting, the real stars of the night wore blue (and hey! Look at those spiffy skyline jerseys!), mainly Nowitzki, who channeled 2009 Dirk and put up 31 points, and Wesley Matthews who finished with 25 points in the 118-108 win over the Clippers.

“I was just happy that we won,” a modest Matthews expressed. “We laid an egg last night (against the New Orleans Pelicans) and that’s not us. We needed a game like this for our moral, for our fans, and to let everyone know we can play this game.”

Carlisle couldn’t help but take a swipe at Jordan himself (hack him again!) when comparing center Zaza Pachulia, who put up 10 points and 10 rebounds, to DeAndre. “Our guy is a 90 percent free throw shooter. And we love him, because his basketball IQ, his basketball purity is as pure as undriven snow.”

The game itself was a mélange of fire and ice, but it was certainly sealed within the third quarter when the theatrical game of “Hack-a-Jordan” (intentionally fouling Jordan, whose free throw percentage is lower than his shoe size) took shape. During fourth quarter fan ass-clinching moments, Clippers managed to tie up the game late, but Matthews, Pachulia, and Nowitzki took the reigns and pulled away safely.

Carlisle had one sentence that summed up the entire night. “I think the basketball gods were on our side.”

Does this mean the carnival vomit-induced ride that is DeAndre Jordan is finally over?

But we won’t know until the two teams meet again in March. Maybe then, someone will shoot a commercial featuring Journey’s “Open Arms” over footage of Dirk staring down Jordan after nailing a pivotal 3-pointer. Cause that would be seriously fucking rad.