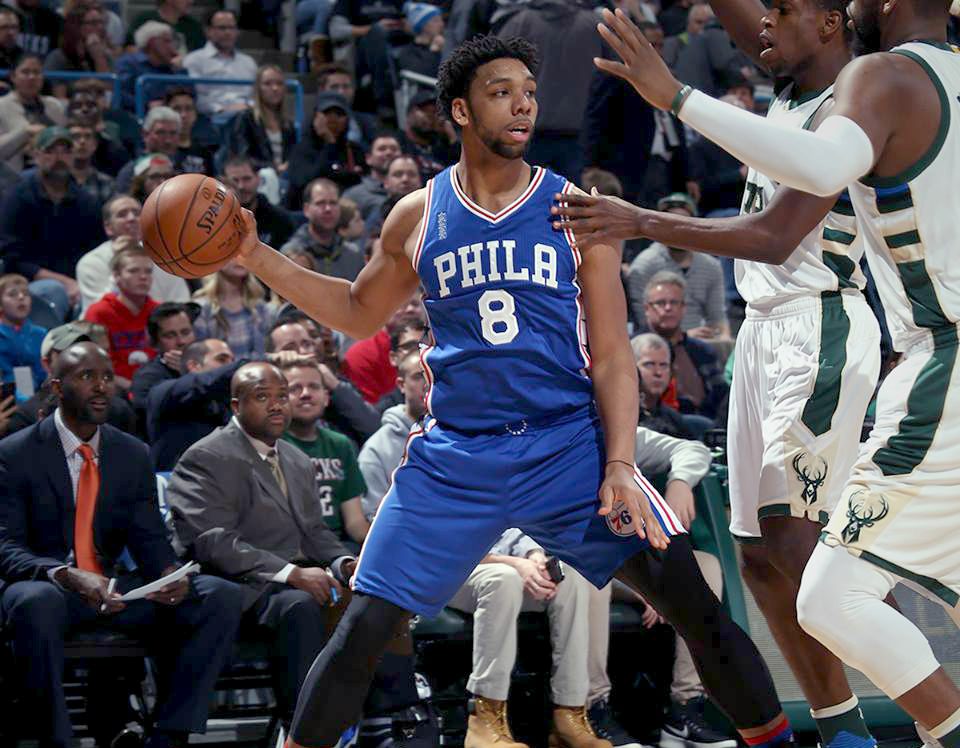 In a high scoring affair between the NBA’s two lowest scoring teams the Philadelphia 76ers fell to the Milwaukee Bucks Wednesday night, dropping Philly to 0-18 on the road and 1-30 overall. Led by 22 points from the “Greek Freak”, Giannis Antetokounmpo, 21 points from Khris Middleton and a solid all-around performance from former Sixer, Michael Carter-Williams (18 pts, 9 ast, 5 reb), the Bucks shot 60 percent from the field and destroyed Philly in transition as they built a 25-point 2nd-quarter lead that put the game out of reach for the young 76ers.

Only a minute and thirteen seconds into the game, Philly found themselves down early with Milwaukee jumping out to a 10-0 behind three consecutive Sixer turnovers. Things would only get worse from then on as the Bucks went on to shoot 65.1 percent (28-43) from the field, led by flawless performances from Giannis Antetokounmpo and Khris Middleton who combined to score 30 points on a perfect 13-13 from the field in the opening half. The Sixers, as they have all season, fell victim to sloppy play and fumbled passes yet again, giving the ball away 14 times that led to 25 easy points in transition for Milwaukee. Philly’s starting unit would struggle as well, committing 10 of these turnovers, while producing only 19 points on 7-18 (38.9%) from the floor. Hollis Thompson and Jerami Grant would lead the 76ers with seven first half points apiece as they took a 65-46 deficit into halftime.

In the 2nd half, the Sixers would make a valiant attempt at a comeback, cutting the lead down to 13 in the 3rd quarter and outscoring the Bucks 54-48 in the final 24 minutes, but it wasn’t enough as they ultimately fell 113-100, extending their losing streak to 12. Jahlil Okafor led the Sixers with 17 points (5-16 FG), but struggled against the length and athleticism of Milwaukee’s John Henson (season high six blocks) throughout the entire night. Aside from “Big Jah”, the Sixers had three other players score in double figures. Hollis Thompson had another solid shooting performance, scoring 16 points off the bench; Nerlens Noel had 11, while Isaiah Canaan and Carl Landry added 10 apiece.

Sloppy Play
After turning the ball over 26 times against the Grizzlies on Tuesday night, the Sixers handed over another 23 in their loss to the Bucks. Kendall Marshall was responsible for six of those turnovers as he’s struggled to find his flow within Brett Brown’s offense since his return from injury. Milwaukee was able to capitalize off of Philly’s mistakes, turning these takeaways into 36 points on the other end.

Carl Landry
Thirty-two-year-old Carl Landry made his season debut after missing the first three months of the season with a wrist injury. Landry, a nine-year veteran, provided an offensive spark off the Sixers’ bench scoring 10 points on 6-8 from the free-throw line and adding five rebounds in 13 minutes of action. He even blocked a Michael Carter-Williams dunk attempt in the 2nd quarter, showing that despite his age, he can still get up at the rim with the young guys. With the youngest roster in NBA history, Landry’s biggest contribution to the 76ers will be in the locker room where he’ll be able to provide a much needed leadership presence to the a team whose second oldest player is 25-year-old Robert Covington.

Landry on his leadership responsibilities: “Be a leader every day. Come in at the right time and (respect) the NBA dress code. Taking charges, doing things that it takes to play in this game for 10 years.”

MCW
Former 76ers guard, Michael Carter-Williams, had himself a heck of a game scoring 18 points (9-13 FG), while adding nine assists, five rebounds and four steals in 32 minutes. Although he was a bit sloppy at times (seven turnovers), Carter-Williams, the 2014 NBA Rookie of the Year, set the tone for the Bucks, showing the explosiveness, poise and play-making ability that Sixers fans got a taste of during his season and a half in Philadelphia. In 25 games this year, MCW is averaging 12.2 points, 5.5 rebounds, and 4.1 rebounds, while shooting a career-high 46.1 percent from the field and committing a career low 3.2 turnovers per game.

Game Notes
• In addition to struggling from the field, Okafor found himself on the tail end of two ferocious dunks by Giannis Antetokounmpo and Jabari Parker.
• Nik Stauskas, a starter at the beginning of the season, was a “DNP – Coach’s Decision” against the Bucks despite the Sixers trailing by as many as 25 points. Since the return of Tony Wroten and Kendall Marshall, Stauskas has completely fallen out of the rotation, going scoreless in his last four games in just under nine minutes per contest.
• Bucks assistant, Joe Prunty, made his interim head coaching debut filling in for Jason Kidd who is recovering from hip surgery.
• The Sixers will lead to Phoenix to take on the Suns on Saturday night at 9:00 PM.