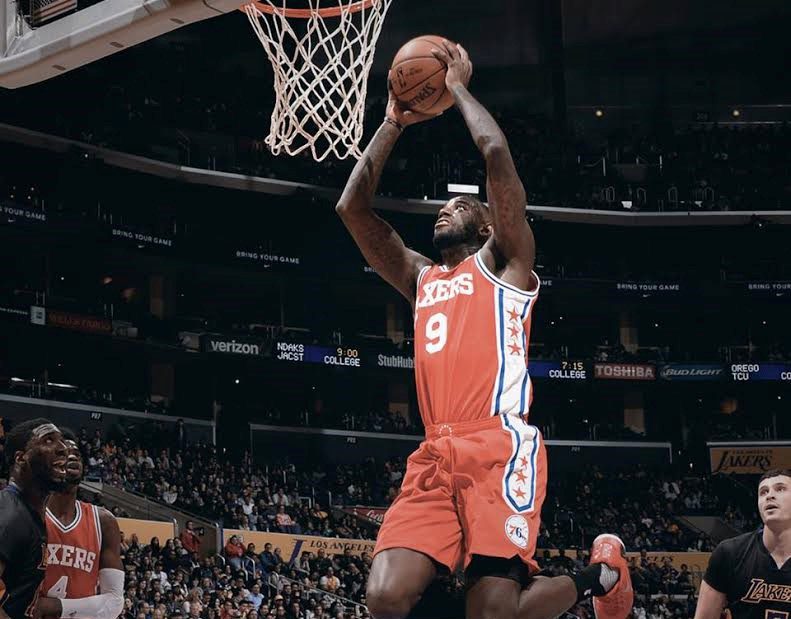 While most twenty-something-year-olds were out popping bottles and taking “look-how-much-fun-I’m-having” pictures for Instagram, the Sixers hopped on a plane to Hollywood looking to start 2016 on a victorious note, and who better to face than the Los Angeles Lakers, right?

Whether it was great defense or atrocious offense, neither team could get into a good flow offensively in the opening half Friday night. With Ish Smith in foul trouble, the Sixers’ ball movement fell flat as they were unable to push the ball in transition and effectively create open shots on the perimeter. Scoring wise, T.J. McConnell filled in nicely for Smith, but his patient style of play proved to be a lot less effective than Smith’s up-tempo pace as Philly went on to shoot 35.7 percent (15-42 FG) from the field and 27.3 percent (3-11) from three in the first half. The Lakers, playing without Kobe Bryant, experienced similar problems, converting on only 31.1 percent (14-45 FG) of their shot attempts, helping the Sixers take a 41-40 lead entering the half. McConnell led the Sixers with 10 points (4-4 FG), Nerlens Noel added another nine and in 11 minutes off the bench, Jahlil Okafor had eight.

After the break, the 76ers offense continued to remain stagnant as the Lakers began to pull away. Ahead 71-68, the reigning Sixth Man of the Year, Lou Williams, led Los Angeles on a 17-4 run to help the Lakers take a 16-point advantage with four minutes left in regulation. Williams scored 12 of his 24 points in the 4th as the Lakers would go on to win 93-84 for their seventh win of the season. In the final period, L.A. converted on 52.6 percent (10-19 FG) of their attempts, a huge improvement from the 33.8 percent (23-68 FG) they shot in the first three quarters. For the Sixers, the loss was disappointing consider the fact that they had ended 2015 on such a high note with victories in Phoenix and Sacramento. In both wins, the 76ers averaged 110.5 points on 45.1 percent from the field and had at least four players score more than 14 points. Against the Lakers, the Sixers shot 36.9 percent and Nerlens Noel (15 points) was the only player to eclipse the teen scoring plateau.

“It starts with the point guard”
After combining for 33 points, 10 assists, and ONE turnover against the Sacramento Kings, Ish Smith and Isaiah Canaan struggled to get into any type of offensive groove Friday night. Smith, who had been averaging 18 points and 8 assists since returning to Philly, scored only nine points on a frightening 3-19 (15.8%) shooting performance. His backcourt mate, Canaan, wasn’t much better, going 2-11 (1-8 from three) for seven points and three turnovers in 31 minutes of play. Post game, head coach, Brett Brown, addressed the short comings of his two starting guards saying, “Ish and Isaiah struggled. They went 5-30. We felt like our defense was holding the fort, but we weren’t able to make shots to break it open and their mobility at times got the better of us.”

On a positive note, as Smith sat with foul trouble, the Sixers got a healthy contribution off the bench from T.J. McConnell who went 5-6 from the field for 12 points, a game-high seven assists and four rebounds. Despite his impressive stat line, after the game, McConnell said he was disappointed in his performance down the stretch, especially during the 17-2 fourth-quarter run that sealed the game for the Lakers. “I can’t let that get out of hand like that”, said McConnell. “It starts with the point guard, so that falls on me.”

No Kobe, No Problem
As Kobe rested with a sore right shoulder, the Lakers were uplifted from big performances from their young stars. Second-year phenoms, Jordan Clarkson and Julius Randle, scored 19 and 15 respectively, while rookie Larry Nance Jr. added eight points and a game-high 14 rebounds in 24 minutes. Their win over the Sixers was the Lakers first victory of the season without Bryant in the lineup.

Game Notes
• Hollis Thompson – DNP (Right eye corneal abrasion)
• The Sixers, who rank fifth to last in the NBA in rebounds per game (42.0), pulled down 50 boards against the Lakers. Nerlens Noel led the way with 12 followed by Jerami Grant who grabbed seven.
• Kendall Marshall, making his return to Staples Center, didn’t play Friday night. During the 2013-14 season, Marshall played 54 games for the Lakers and averaged a team best 8.8 assists.