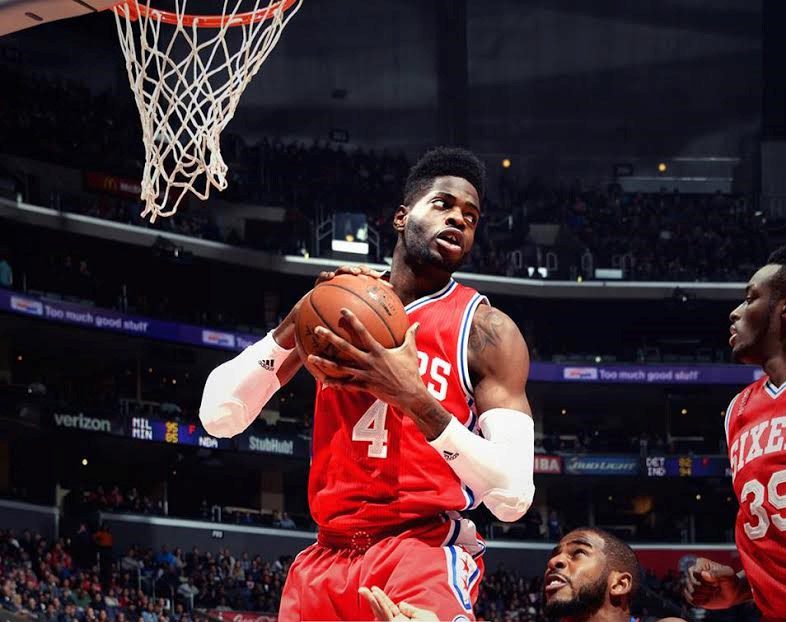 Coming off of a frustrating offensive performance against the Los Angeles Lakers the night before, the Philadelphia 76ers stayed in the City of Angels, only to be pummeled by the high-scoring, high-flying Los Angeles Clippers on Saturday night. Trailing 31-29 at the end of the opening period, the Sixers allowed the Clippers to go on a 26-12 run to end the 2nd quarter as they took a 17-point lead (69-52) into halftime. In the second half, things would go from bad to worse. Up by as many as 39, the Clippers coasted to a 130-99 victory, extending their winning streak to six, while dropping the Sixers to 3-33 on the year.

DeAndre Jordan
A few years ago, Charles Barkley hilarious said that “If you locked him (Jordan) in a gym by himself overnight and told him he couldn’t dunk, he’d have six points in the morning.” And you know what? Sir Charles is right. Jordan can’t dribble, he can’t shoot and he can’t pass. Offensively, all he can do is dunk. But let’s be real, once DeAndre takes flight, there isn’t a single soul in the NBA that can stop him. Against the Sixers, Jordan scored 22 points on 9-10 from the floor and hauled down 13 rebounds in just under 30 minutes of action. The amazing part about his stat line is that of his nine made field goals, ALL NINE WERE SLAM DUNKS!

Jahlil Okafor
On the other end of the floor, Jordan and Clippers backup center, Cole Aldrich, had no answer for Okafor, either. Playing in a limited role off the bench, “Big Jah” put his entire offensive arsenal on display, showing off an advanced level of ball handing and footwork skills that very few, if any, 20-year-old rookie’s possess. In 18 minutes, Okafor registered 23 points on 10-14 shooting to go along with four rebounds and an assist. It should be noted, that for the majority of the time that Okafor was on the court, Nerlens Noel, was on the bench. As for why? Defensive issues said head coach, Brett Brown. “You’re always trying to talk about communication with pick-and-rolls”, he said. “If those two big men have a chance to play together at all it’s going to be about space. That’s what comes to my mind.”

Three-Point Shooting
After missing all five of his three-point attempts against the Lakers, Nik Stauskas, went on a rampage from downtown, draining 6-8 from deep for a career-high 18 points. Stauskas’ strong performance was a welcoming sign for the second-year pro out of Michigan who has struggled with consistency issues all season. Following a 17-point performance against the Phoenix Suns, Stauskas scored a combined seven points over the next three games on 3-22 shooting (1-14 from three). As for the Clippers, three-pointers were falling like rain in the middle of May. Wesley Johnson, J.J. Redick, and Austin Rivers combined to shoot 11-16 (68.8%) from distance. Rivers, who is averaging 8.1 points for the season, poured in a game and season-high 26 points in 24 minutes off the bench.

Game Notes
• Blake Griffin missed his fourth game with a partially torn left quad tendon. The Clippers are 4-0 in his absence.
• Despite ending the six-game road trip with consecutive losses, Brett Brown was very positive saying, “This road trip has been long, but I think it has been successful for us.”
• Ish Smith and Chris Paul, both Wake Forest alum, registered 10 and 14 assists respectively.
• DeAndre Jordan’s career high is 10 dunks, which he set against the Lakers in 2009.
• Former Sixer, Luc Richard Mbah a Moute, registered seven points and four rebounds in 23 minutes. According to teammates, Mbah a Moute was a great veteran presence in the locker room; quiet at times, but impactful nonetheless.
• The Sixers will fly back home to take on Karl-Anthony Towns and the Minnesota Timberwolves on Monday at 7:00 PM.