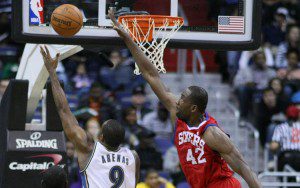 Elton Brand speaking on why he chose to return to the NBA and what his role will be with the Philadelphia 76ers:

“I was simply too busy following the NBA blueprint that had been engrained in me from the beginning: Play well, keep your head down, offend as few people as possible, and get paid. Now, here in Philadelphia, my adopted hometown, I’m excited to have a chance to do things differently — be a positive influence and help the organization get back on track.”

“You might’ve noticed we’ve got a pretty talented kid on the roster in Jahlil Okafor, someone I happen to share some things in common with. Despite how he’s been portrayed, I know Jahlil. He’s a good kid with a good heart. He’s not unlike most 20-year-olds you probably know, and he’s definitely not at all different than most of his fellow players. Hell, if camera phones were around when Brad Miller, Ron Artest (Metta World Peace), and I were Jahlil’s age, we might’ve been banned from the league altogether, never mind suspended for a few games”. Sports Illustrated/The Cauldron