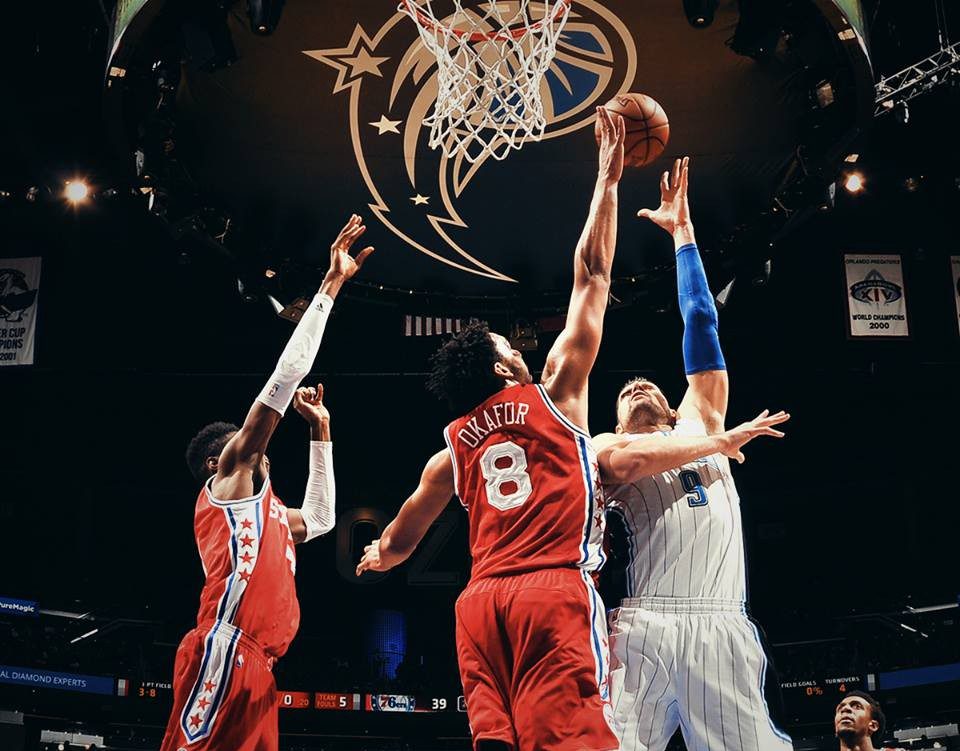 With stiff defense and a balanced offensive attack that resulted in five double digit scorers, the Philadelphia 76ers defeated the Orlando Magic 96-87 on Wednesday night; marking their first win against an Eastern Conference opponent and improving to 6-38 on the season. The Sixers, though, coming off of what Brett Brown described as a “cruel” double overtime loss to the New York Knicks, would find themselves down early. Elfrid Payton and former Sixers draftee, Nikola Vucevic, combined to score Orlando’s first 17 points on a perfect 8-8 from the field as the Magic take a 10 point lead early in the opening period. The Sixers, who are no strangers to double digit deficits, would quickly respond with three consecutive three-pointers to end the 1st quarter and steady scoring contributions from Jahlil Okafor and Ish Smith in the 2nd to take a one point lead (47-46) into halftime. Jahlil Okafor led Philadelphia with 15 points, followed by Ish Smith who scored 11 and Hollis Thompson who chipped in eight off the bench. The 76ers were also phenomenal defensively, holding the Magic to just 37.8% (17-45 FG) shooting from the field and 11.1% (1-9) from beyond the arc.

After the break, the Sixers kept their foot on the gas pedal, scoring at will against an Orlando Magic defense that ranks sixth in the NBA in fewest points allowed (98.7). With the score tied at 53, Robert Covington and Jerami Grant scored 13 consecutive points, helping Philly turn a once back and forth game into a 14 point blowout. Grant, who is on a minutes restriction after injuring his left calf, was brilliant in the 3rd quarter, scoring 11 points and blocking three shots, while getting to the charity stripe, a season high, eight times. Almost effortlessly, the Sixers poured in 34 points (10-17 FG, 10-12 FT) in that 3rd period, and looked destined to run away with the victory until a cold streak early in the 4th rejuvenated a seemingly lifeless Magic team. Leading by 10 (81-71) entering the final period of play, the Sixers managed to score only two points (1-8 FG) in the first six minutes of the quarter as the Magic slowly, but surely began to slice into their double digit deficit. Trailing by only four with three minutes remaining, Isaiah Canaan drilled a clutch three from the top of the arc, leading a 7-0 run that extended the Sixers lead back to 11 and iced the game for good. The win, Philly’s fifth since acquiring Ish Smith, was much needed in the eyes of Brett Brown after his team had suffered two devastating overtime losses the week before. ““We feel greedy in that we felt like we let the Chicago game pass us by. We shake Carmelo’s [Anthony] hand, he hit a three to take it into overtime at Madison Square Garden and we end up losing that game,” Brown said. “We feel like we’re playing good basketball and we feel like our defense is carrying us.”

Phenomenal Bench Play
Playing shorthanded, the Sixers received huge contributions from their second unit, which outscored Orlando’s reserves 51-24. In 30 minutes off the bench, Hollis Thompson scored 17 points (7-10 FG), his second consecutive double-digit scoring outing after being held in single figures in each of his previous six games. Isaiah Canaan, who lit up the Magic for 23 points on six made three-pointers in their first meeting on November 7th, added 15 (5-8 FG), while Jerami Grant added another stat stuffing game to his resume, finishing with 12 points (3-7 FG), six rebounds and five blocks in 28 minutes of action.

Someone Call a Doctor
Already without Nik Stauskas, the Sixers were forced to overcome injuries to two of their starters in their win over the Magic. Subsequent to leaving the game in the 2nd quarter with an ankle sprain, Nerlens Noel was forced to the sidelines for good after becoming lightheaded towards the end of the first half. Post game, Noel said, “I started getting dizzy. I didn’t want to catch the ball. I didn’t know if I’d be able to,” while adding, “I didn’t want to go back out there and just hurt my team in any type of way, not being able to react.” If that wasn’t bad enough, JaKarr Sampson, making his seventeenth start of the season, exited the game with a left hip pointer after playing only five minutes off the bench. Depleted, but not deterred, Brett Brown was complimentary of his team’s ability to step up and secure a win despite injuries to three key members of his rotation. “To lose Nerlens and JaKarr, already being down Nik Stauskas, I thought it was a great team effort,” Brown said. “You look at Covington with 11 rebounds. You look at Jerami’s five blocked shots. You look at the timely baskets that Hollis and Isaiah Canaan made. Jahlil carried us in the first half and make some big baskets and had a few good defensive plays at the rim in the second half. It was a team effort led by the defense.”

Game Notes
• DNP’s: Nik Stauskas (left shoulder contusion), Victor Oladipo (knee)
• Ish Smith (13 pts, 11 ast) registered his 10th double-double of the season.
• In his last three games, T.J. McConnell (3 pts, 4 ast) has dished out 18 assists and has only committed one turnover in a combined 47 minutes.
• Elfrid Payton scored a game-high 21 points (8-13 FG) to go along with 10 assists and six rebounds in 41 minutes.
• Former Sixer, Jason Smith, scored four points off the bench for the Magic. Smith, playing in his 8th season out of Colorado State, began his career with the Sixers, playing three seasons in Philadelphia before being traded to the Hornets in 2010.
• The Sixers will fly back home to take on the Boston Celtics on Saturday at 7:00 PM.