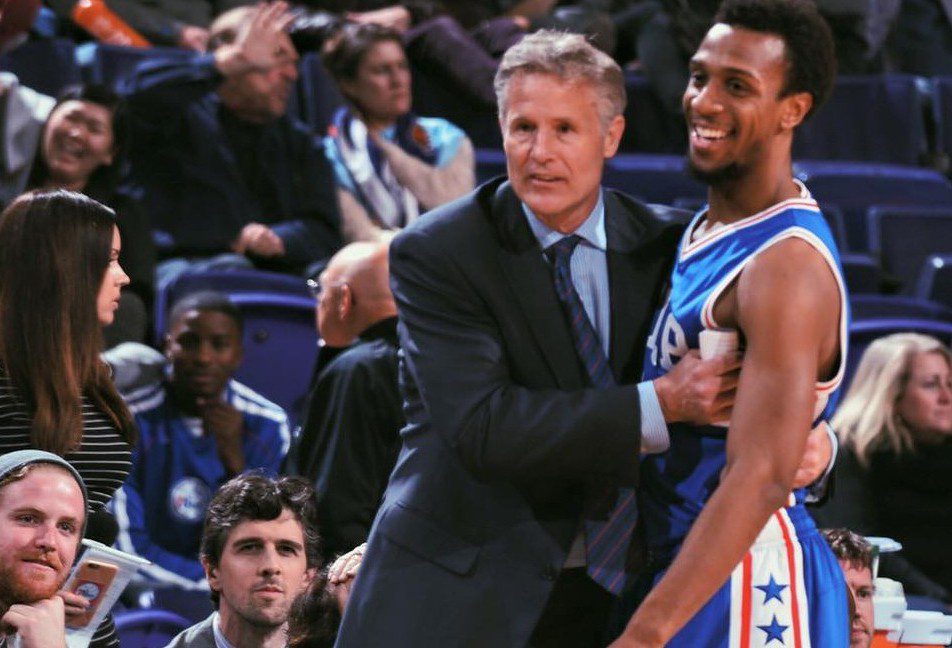 Before tipping off against the Orlando Magic, Sixers coach Brett Brown sat down with Adrian Wojnarowski, host of The Vertical Podcast, in a candid one hour interview regarding his upbringing, early coaching days, the current state of his team and what the future holds for the Philadelphia 76ers. To better understand Brown, take a look at a few excerpts from Wednesday’s podcast.

On playing for his father, Bob Brown, in high school
“He was so disciplined. There were very rigid rules from one bread role at a dinner table to haircuts to having to wear hats when we walked out of the locker room, so we didn’t get cold….He was my coach for so many years. I love him to death and I’ve learn a lot, but it was definitely, at times, combative, and I say that in a respectful, healthy way. But he definitely set the table for discipline and accountability and those types of things at a very young age.”

On playing for Rick Pitino at Boston University
“I left Maine, went straight to Boston and never came home again. During my time with Coach Pitino, I believe six freshman came in, four transferred and one passed away on the court; my roommate passed away on the court in a preseason practice with a heart condition. That was my junior year and I was the only one left that came in as a freshman. It was an experience of dealing with physical stuff that you had never been through where we were in the greatest shapes of our lives. Every second of every game that I played for him we extended our defensive press. I was his two year captain and went four years with him. Looking back on my days with Coach Pitino, I learned how to dismiss pain and thought that I could get through anything.”

On spending time with his son Sam
“I grew up as the son of a coach, so I’m always in the gym. And to be able to share that with my son; to be able to look up [in the stands] in London when we beat Russia at the buzzer and see him up in the balcony and point at him during the Olympic Games was special. To let him be in the locker room of two All-Star games and go sit in Kobe’s seat or Durant’s seat and touch their sneakers at a young age is special. For him to see an NBA championship is special. For him to see his dad as a coach in the NBA is special. And for me to coach him because he’s a gym rat is special. It’s the most enjoyable time I have outside of coaching the 76ers. My family time is my world.” 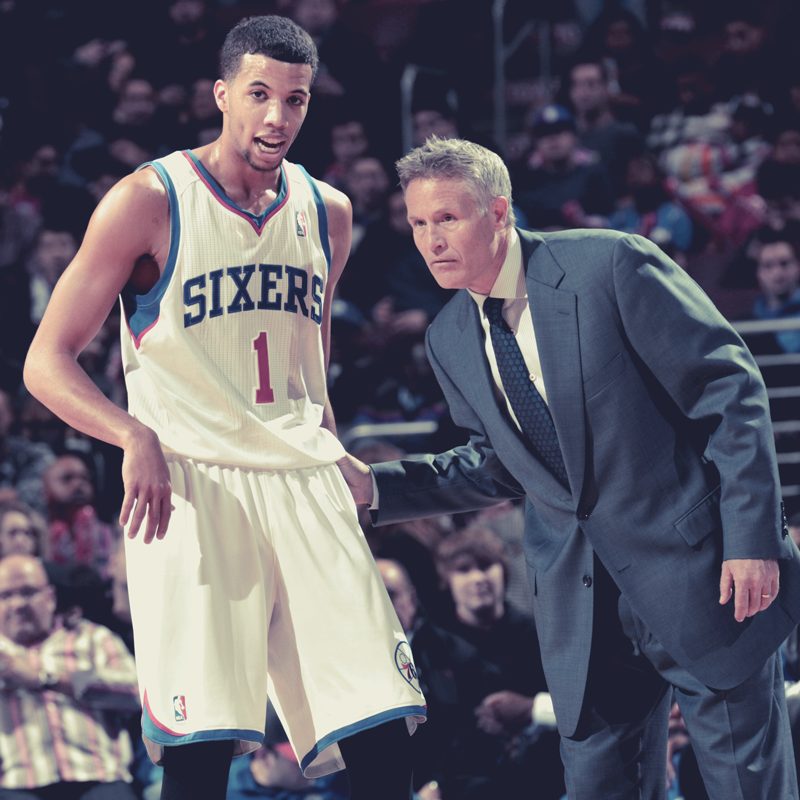 On initially turning down the Sixers head coaching offer
“I wasn’t going to go to Philly. I felt like the position required a four year commitment. They were very transparent and honest about their plans on a rebuild, but I felt like it wasn’t good for me to work the volume of years and take a risk on something that didn’t have any stability in my view. I wanted to continue to be next to Pop [Gregg Popovich]. I was in great shape and I loved working for R.C. [Buford] and Pop. And so the desire to be a head coach still existed, but I felt like it wasn’t what I wanted for me or my family if it wasn’t going to have that type of duration, so I said no and told them I wasn’t going to accept the position.”

On drafting Joel Embiid third overall
“I studied Joel Embiid and said ‘wow.’ Think of the privilege I’ve had to coach David Robinson and then Tim Duncan, so I saw what elite looked like….I remember in my office when Sam Hinkie came in and said that Joel Embiid had just been injured in Cleveland and he perhaps might be available to us now at the third pick. In our view it was fine. He’s worth it. I think now that I have spent time with him and watch his mental growth more than anything as he’s navigated through these injuries; I feel that there is something uniquely special in him. We can’t get too full of ourselves and create too much expectation because he hasn’t played for so long, but I look at him, I see his size, see how he carries himself and I see an amazing competitor in all of it. So we get excited about Joel Embiid no doubt.”

On “the process” taking longer than expected
“As I look back, I wouldn’t do anything different with who we drafted and how it has played out. We didn’t realize Joel [Embiid] was going to be injured. We didn’t know what was going to happen when I went to New York and interviewed Dario [Saric]. So when you look at Joel and Dario, that extended this rebuild for a year and maybe longer. The rebuild length, the timing of it, has gone on longer than we all would have expected when we met in 2013 and I accepted the position.”

On team’s point guard situation in the beginning of the season
“It was my understanding that we would have Kendall [Marshall] at the start of the year or very close to opening night, but as time unfolded that obviously didn’t happen. Tony’s [Wroten] return to play was declared, it was well documented that we wouldn’t see him until the time that he did come back. I think it represented almost 25 games. And I think it caught everybody off guard to have to figure out that position with some of the young guys and journeymen that we had. It no doubt hurt us. It was hard to coexist with a bunch of other fellow 20 year olds and inexperienced point guards and it exacerbated some of the problems we had trying to pair up Nerlens and Jahlil.”

On Ish Smith’s immediate impact
“Before Ish, there were times that we weren’t throwing punches like we had been previously. No matter if we were winning or losing, the competitive side at times in games wasn’t where I wanted it to be. The thing that helps me sleep most nights is that I’m so proud of our guys and how hard they play. We had reached the period of time where we needed to do something and we felt that the point guard position is where we could make the most impact because I had coached Ish and he was on the table. There is a charismatic side of him that almost supersedes his talent. He’s very personable and he’s got balance in life. For all those reasons, we gave up some picks to re-point the needle and get us back on track because we were going off track a little bit.”