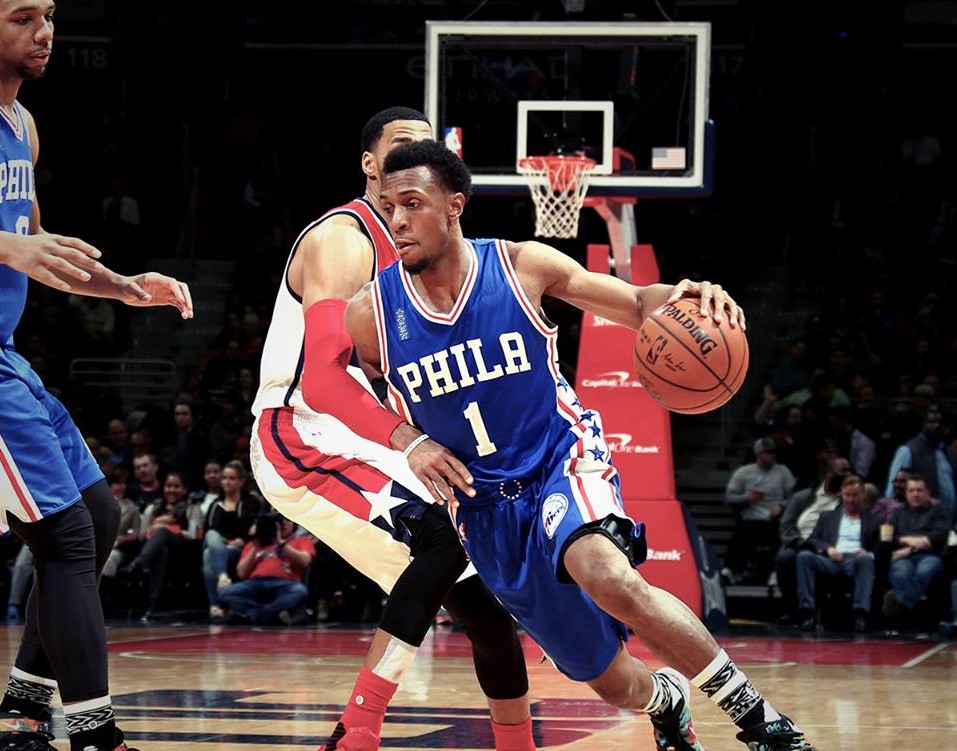 A collection of post-game comments following the Philadelphia 76ers loss to the Washington Wizards:

Brett Brown
On 106-94 loss
“I think that we had most of the game where we would say we were very competitive. We started the game poorly. We dug ourselves a hole [by allowing] that 38-point 1st period and then we for sure competed. The start of the 3rd let us down a little bit, but I think that for the large body of work for that game, I’m proud of their effort.”

On Okafor guarding the power forward position
“We’re trying some things with Jahlil. We’re trying to see if he can guard perimeter four men type [of players] and let Nerlens block shots. So we tried that at the start of the game and we persevered in the 3rd period to start the second half. That hurt us [down the stretch], but it’s something I don’t regret. That’s what our job is. We have to see how we’re going to pair those two up, so we’re trying different things. I think that the combination of a good team, the [Okafor/Jared Dudley] matchup, their ability to score and the 1st period hurt us.”

On how he decides when to play a small rotation
“I think you just have to do it because it’s a small ball league sometimes just as much as it is a big ball league. I don’t think there is any method to the madness. I think you just have to go out there and play an NBA game. I think that’s where we’re at in the development of our program and you do it. We’ll probably try something new tomorrow night. We didn’t do it long, but we did it. I think that when you start looking at the plus/minus [ratings] of our groups, you’ll see that we are better off defensively, at the moment, when we split [Okafor and Noel] up. We all know that and to start games we want to try thing like that from time to time.”

Randy Wittman [Wizards Head Coach]
On 106-94 victory
“We were lax again a little too much. This team needs to work on that. We’ve had problems with that for most of the year. We were up 25 and then they got it down to nine, maybe eight. We kind of stopped defending. We turned it over 10 times, I think, in the 3rd quarter. We’ve talked about it with this team being careless with the ball. The Sixers have a lot of athletes that gamble [for steals] in the passing lanes and that’s what got them back into the game. I liked our start, obviously. Then they came back and cut it to nine or whatever that was, and we were able to take control, I think with six straight points after that.”

On John Wall’s triple double
“If we win [it matters]. We have talked about where we are as a team in terms of rebounding. It’s important that we get our guards back and have them help more. I think the importance of that is that John is going to give us 10 plus assists probably every night or pretty much every night, so the 13 rebounds I really like just from a standpoint of getting back in there and helping our [big men]. We ended up winning the rebounding game tonight because of that. But to me, it doesn’t matter one way or another, as long as we win.”

John Wall [Wizards Point Guard]
On fourth career triple double
“Coach [Roy] Rodgers wanted me to rebound more, so that’s the reason why I got the triple double. I had a lot of chances to get a couple of them, but I missed it by, like, one rebound or one assist. The most important thing is just trying to get a win and trying to get on the right track. That’s more important to me.”

On Sixers comeback attempt
“In the 3rd quarter, we were up 16 with 3:50 left and then [the Sixers] just went on a run. Ish Smith was getting layups. They were getting three’s. We weren’t doing our pick and roll. We did a good job most of the game of staying back on defense and not letting Nerlens Noel get behind us, so they couldn’t throw lobs [to him]. But when he did get behind us, they skipped passes for open three pointers; they made some and went on a run.”

On Bradley Beal’s return to the starting lineup
“Other guys have been stepping up and doing a great job in their roles. With Brad [Beal] starting, he gives us another ball handler out there that’s more aggressive and is able to make plays. Garrett Temple is different from who Brad is. He’s a great defender, a great slasher and he’s done a great job at making spot up three’s for us. They have two different games, so there are two different aspects you’re going to get. I think that [with Beal starting] it gives us another aggressive scorer right away.”

Marcin Gortat [Wizards Center]
On victory
“It was a must win for us. We came out aggressive. We came out ready to play. We shared the ball. We rebounded the ball a little bit better and we came out with the win…I’m not getting happy about this one win. We’ve been in this situation a million times. It’s just one play. It’s just one game. We won, great. We have the momentum now. Hopefully, we’ll be able to get another win tomorrow and now we can start playing a little bit better.”

On John Wall’s 13 rebounds
“He took half of [those rebounds] from me. I let him rebound. For him, it’s great he had all those rebounds, but at the end of the day, we need him to be the focal point; set up the offense, the defense, distribute the ball the right way, run the offense correctly and that’s what he did. He got everybody involved. He was great. I’m happy to hear he got that triple double today.”

Jared Dudley [Wizards Forward]
On victory
“The Sixers have been struggling all year, so this is a good win; a nice little home cooking before we go to Charlotte. I think that we established ourselves offensively, the way we have to play. Defensively it’s about getting enough rebounds, getting enough stops and keeping our turnovers low enough to give ourselves a chance to win every night. Sometimes we have and that’s something we have to improve on. With our team being so deep, we have to able to get our rotations and everything ready to play for these next 30 games [of the season].”

On Bradley Beal
“He gives us more of a fire punch. He’s someone who, out of everyone on our team, he and Gary Neal are probably the two most aggressive to score. He’s looking to score and to put pressure [on the defense]. He’s our best offensive player. Anytime you have that threat where people are coming off of screens looking to pass, he’s looking to score. He’s the one guy besides John that can give you 30 points. Anytime you have him on the floor with his spacing; he’s one of our best shooters, so I’m glad to see him back on the court.”

On the importance of a triple double
“It depends on who the player is. I think that if you do it the right way; the way [Russell] Westbrook and [Draymond] Green do it [than it’s important]. You can tell they impact the game. I think that with John, if he’s rebounding the ball than that’s good because that means that there are a lot of long rebounds and that he’s pushing the ball. I don’t know how many offensive rebounds John is going to get, so for John and for us that’s huge. I’d like to see John in that 22 to 24 point range. On this team, we need him to be more assertive scoring the basketball. I know he’s a great passer, but I see with our weaknesses, when he’s getting to the basket it opens up the pass. I’d rather him be aggressive first then pass.”