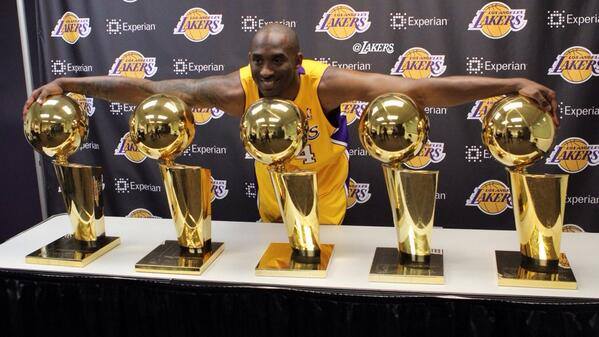 As you can see below, Kobe Bryant, has amassed a stunning number of accolades on the basketball court in his 18-year career. As he steps away from the game he has worked so hard to perfect, expect his legend to to continue to grow long after he has left the hardwood behind.

Bryant currently ranks third both on the league’s all-time post-season scoring and all-time regular season scoring lists. He has been selected to 15 All-NBA Team (eleven times to the All-NBA First Team) and 12 All-Defensive Team (nine times to the All-Defensive First Team). He was selected to play in the NBA All-Star Game on 18 occasions, winning All-Star MVP Awards in 2002, 2007, 2009 and 2011 (he shared the 2009 award with Shaquille O’Neal). He also won the NBA Slam Dunk Contest in 1997.[9] As of December 2015, he has had 1 eighty-point game, 5 sixty-point games, 25 fifty-point games, and 112 forty-point games. Kobe is also in a three way tie with Stephen Curry and Donyell Marshall for most three pointers (12) in a game.  Wikipedia

With his final game on the horizon, let us take a moment to bare witness to the most spectacular plays of his career.