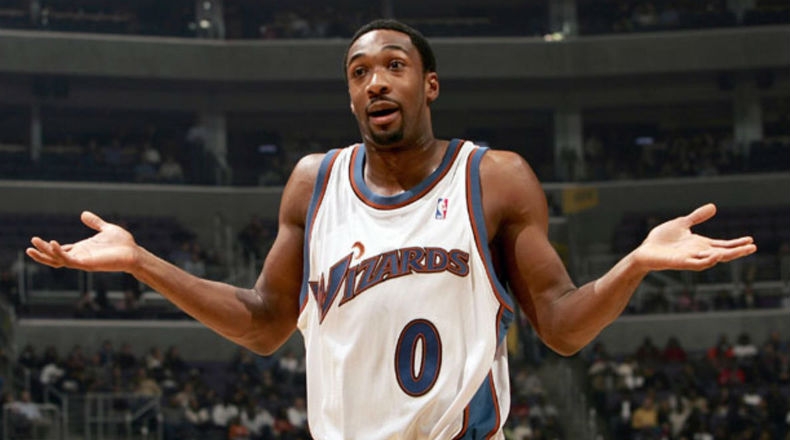 Far too frequently we are much too quick to say something along the lines of, “There will never be anyone like him again,” when we’re discussing athletes. I try my best not to get into that kind of nonsense too much since there will generally be someone who comes along who is, at the very least, vaguely similar to someone who played before them. Regardless of if it’s a watered down, outdated, futuristic or improved upon version, it’s a version nonetheless.

I decided to lead off with that paragraph just so it really resonated with ya when you hear me (or read me) say that there will never be anyone like Gilbert Arenas again.

If you were to conduct a surface level examination of Gilbert Arenas, the basketball player, then sure, you’ll find similarities to countless other players from the past and present. In the most basic ways he’s not all that different from guys like James Harden, Allen Iverson, and Russell Westbrook; highly-skilled, shoot-first perimeter players who served as the primary ball-handlers for their teams in their primes that blurred the lines between Point Guard and Shooting Guard. In a similar fashion, you can call guys like Michael Redd and Brandon Roy poor man’s versions of Arenas; you don’t really need to go too far out of your way to come up with something like that. It’s pretty simplistic.

Let’s forget about Arenas, the basketball player, for just a moment, because as has been the case with every player on this list, I’m looking at a more than just the fundamental on-court stuff for this countdown. If you take a close look at the extracurricular fluff that makes up Arenas’ career (and by “fluff” I mean everything that isn’t totally interconnected with how good Gilbert Arenas was at playing basketball), you’ll see where he starts to really separate himself from all of his peers … and every other human being that has also been a professional athlete.

Saying that Gilbert Arenas is eccentric would be an understatement of epic proportions; it’s more like he’s charisma stuffed inside of an enigma, with a dash of unpredictability and splash of controversy thrown in there, and the final topping on that sundae is a confidence cherry … and none of that was supposed to make sense because Gilbert Arenas didn’t make sense. So it actually all makes sense.

The man called himself “Hibachi” and blogged about how he was going to drop fifty points on the Portland Trailblazers (a message to Blazers Head Coach Nate McMillan, a member of the Team USA coaching staff that didn’t bring Arenas along for the 2006 FIBA World Championships – Arenas didn’t score 50 points against Portland). He was incredibly self-assured, and most of the time that is a great quality. He also called himself “The New O.J.” while offering to kill Nick Young‘s ex-girlfriend. He took to social media to call WNBA players ugly. He brought four guns into the Washington Wizards locker room and was involved in a standoff with former teammate (and future convicted manslaughterer) Javaris Crittenton. He has no filter and lacks common sense and might be crazy and is probably an asshole, and most of the time those aren’t great qualities.

All of this personal stuff makes Gil different than everyone else. Not any better or any worse in terms of the rankings … more interesting for sure, but mainly just different. When it came to his game and on-court legacy, Arenas’ uniqueness on the floor made him just as captivating. Again, he wasn’t doing anything that nobody else was doing, he was just putting everything together in a way that makes it hard to say that anyone was quite like him.

The flair with which Arenas torched opponents and delivered nails into their proverbial coffins has been matched by only a few guys of his era. I can’t recall a player who won’t be a sure-fire Hall of Famer being so unafraid of going after guys who will end up in Springfield someday. Arenas was LeBron James‘ first in-conference rival. He famously outdueled Kobe in one of the most notable games of the 2006-07 regular season, joining the sixty-point club in the process. He dropped 54 in Phoenix that same year, an eff-you to the two-time reigning MVP Steve Nash, and Suns coach Mike D’Antoni, who like Nate McMillan was on the coaching staff that left Arenas off Team USA in 2006. 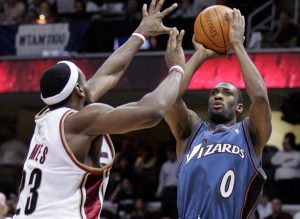 For the first half of that 06-07 season there probably wasn’t a better player in the league than Gilbert Arenas. During a two month stretch that ran from the beginning of December through the end of January Arenas averaged 31 points, 5 rebounds, 6 assists and 2 steals per game and the Wizards were among the top teams in the Eastern Conference. As his stock kept climbing and he continued hitting more big shots in big moments, it seemed like we were watching the next guy on the brink of superstardom.

This is what makes the back half of Arenas’ career so sad. It’s not just that right while he was peaking he suffered a torn MCL and never completely recovered … it’s that nobody even cares to mention Gil with guys like Bill Walton, Grant Hill, Derrick Rose and Penny Hardaway when talking about the greatest “What if he never got hurt” players in league history (some additional what-if’s for Arenas: what if Arenas decided to sign a max deal with the Golden State Warriors in the Summer of 2008 … what if he didn’t bring guns into the Wizards locker room and subsequently get suspended for 50 games … what if Javaris Crittenton decided he wanted to start manslaughtering right then and there).

Arenas’ peak was short-lived, but his steady climb year by year and the brief period of stardom he did enjoy suggested that there was a chance that he could go down as an all-timer. Instead he’ll be remembered, by most, for being an all-time oddball. I’ll remember Arenas for being the first opponent of LeBron James who put the fear of God into me whenever he was playing the Cavs. I’ll remember him for his swing the ball around his waist three times free throw routine, which I once saw a kid try during a high school Summer League game, only he airballed the free throw (he didn’t swing the ball around his waist on the next free throw attempt). I’ll remember him for being Stephen Curry before Stephen Curry in regards to having in-the-gym range and absolutely positively no conscience whatsoever. I’ll remember him for those three peak years when it felt like he would be going toe to toe with LeBron, Kobe, Dwyane Wade and Carmelo Anthony for the next half a decade. Despite all of that mostly shitty fluff that came after the torn MCL, I’ll remember the Gilbert Arenas experience quite fondly.