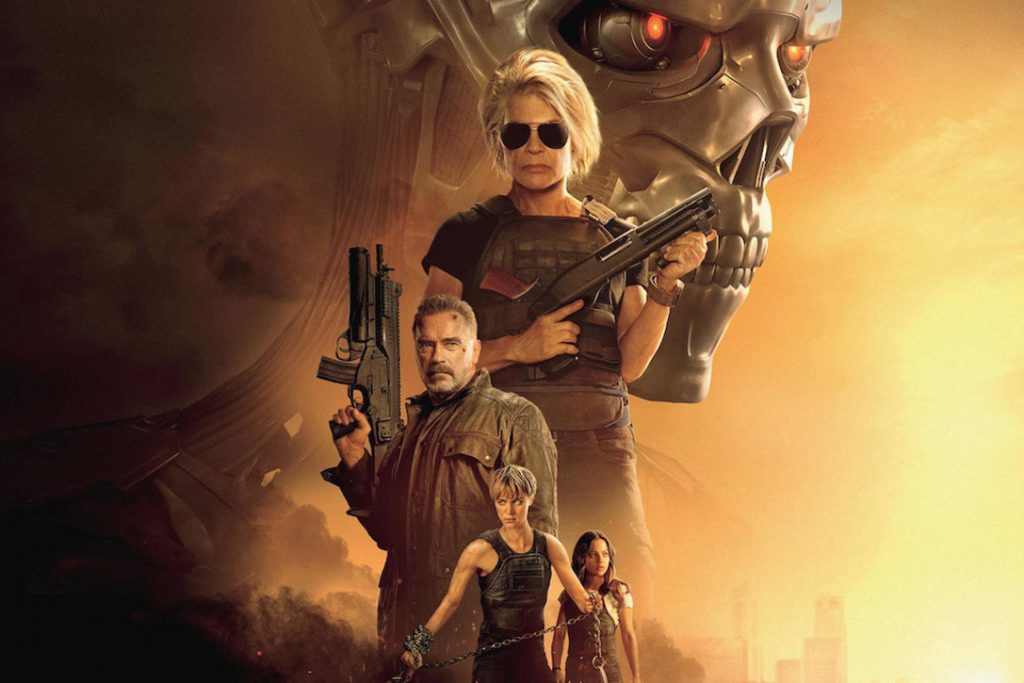 Will the real Sarah Connor please stand up? It’s been 28 years since Linda Hamilton played Sarah Connor in a feature-length Terminator movie, and now she’s back in Tim Miller’s Terminator: Dark Fate. A direct sequel to Terminator 2: Judgement Day, this flick has the baddest mom on the planet help a hybrid cyborg protect a young lady from a terrifying new threat. Arnold Schwarzenegger is back along with Hamilton, and they’re joined by fresh faces, including Mackenzie Davis, Natalie Reyes, and Gabriel Luna.

Slight Remix of a Familiar Plot

The script is a bit of a mess once again, but it’s more forgivable than Terminator Genisys (yuck). It seems like they can’t write a proper sequel to follow up Terminator 2: Judgement Day. Yes, John Connor is in the film, but not for long, and he’s used in a way that feels cheap and pointless. This is another Terminator film where you have to avoid thinking too hard about the plot and the actions of major characters.

If you manage to come into this film accepting the plot is another re-hash of past Terminator sequels (with some surprises), you’ll have some dumb fun. The action is hard-hitting and creative, especially with the new Rev-9 killing machine. There’s no doubt the Rev-9 CGI looked off in the trailer, but it’s cleaned up in the film. Miller and the effects team have a blast playing around with the capabilities of the Rev-9, as it’s a liquid metal and endoskeleton mix. It’s also a welcome sight to see Hamilton and Schwarzenegger blasting away at an unstoppable killing machine one more time.

Linda Hamilton is easily one of the best things about Terminator: Dark Fate. Hamilton is back as Sarah Connor, and she turns in a badass performance as Mother Mary in kill mode. She knows how to balance the vulnerability brought about by tragedy and the drive of a proven soldier that only knows war. Schwarzenegger is also back as another T-800 named Carl, and he’s hilarious as this version of the killing machine we all know and love, but not in a way that ruins the aura of the Terminator persona. And it’s a blessing to see Hamilton and Schwarzenegger together again onscreen.

Mackenzie Davis does a tremendous job as a hybrid cyborg protector named Grace. Davis handles the action scenes well and carries herself convincingly as a soldier of the rebellion. She has a fear in her eyes that pushes her to fight with confidence in every battle. Gabriel Luna as the Rev-9 baddie is menacing but never tops Robert Patrick’s performance as the T-1000. And then there’s Natalie Reyes as Dani, who the Rev-9 was sent back in time to kill. Reyes is a fine actress, but she’s not convincing enough in her role in a particular scene.

The best one can say about Terminator: Dark Fate is that it’s not as bad as the last two Terminator films. It’s more entertaining than T3 but doesn’t make a whole lot of sense, and you don’t even have to try hard to find odd story choices. Luckily, the performances are entertaining and the film benefits from having Linda Hamilton and Arnold Schwarzenegger back together on the big screen.