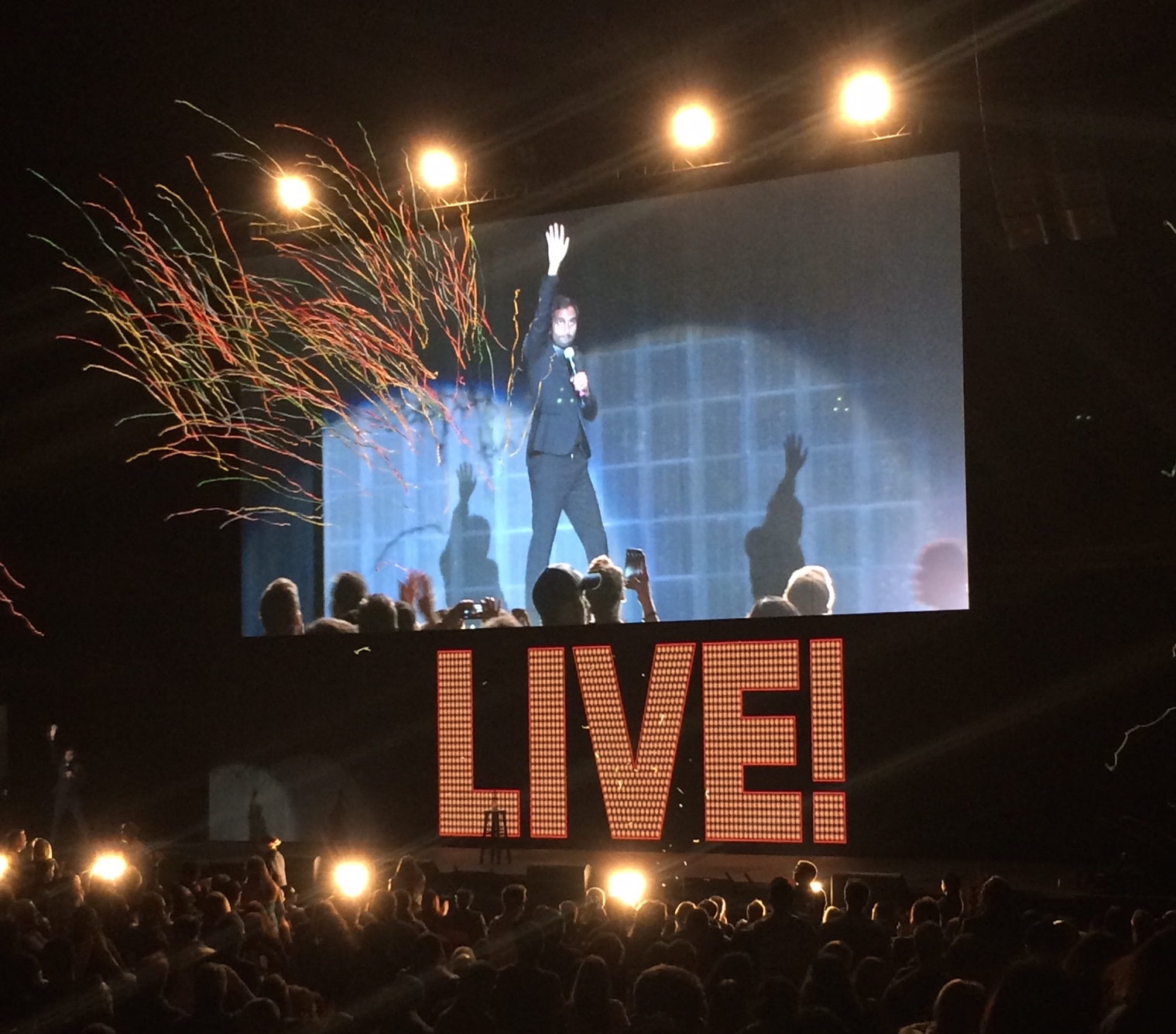 The Aziz Ansari Live tour stopped by San Diego, and it was definitely an entertaining performance all around, as Mr. Ansari flexed his anecdotal wisdom. The venue was the old Valley View Casino Center, formally known as the Sports Arena, and although they clearly need to renovate, the show made up for the funky seats and the slightly musty atmosphere.

Aziz killed it from the get-go. A blazing sunset lit up on the screen, reminiscent of The Lion King, and a silhouette of the skinny, animated comedian appeared. We were told from the beginning to refrain from taking any pictures or recording any footage; however, Aziz insisted on posing for us in the beginning, as if he were telling jokes so that we could get our photos. The screen behind him cycled through footage of a volcano, puppies, penguins, and so on as Aziz did some epic poses for the sake of Instagram.

The material was an observation of a variety of subjects. Aziz talked about everything, including immigration, creepy dudes, Ja Rule, the meat industry, strippers, being single, relationships, and even the timeline of life itself. All of it was golden. When he was on the topic of being single, he even stopped to analyze the hardships of trying to communicate with a stranger you met at a bar, a typical scenario we’ve all been through. Tip: most great long-term relationships don’t start with strangers at bars. He even read the text messages from an audience member that had struck up a conversation with a nice lady that he met at some late-night joint. The audience member started the conversation by telling her to not forget him, and she replies with this: “don’t worry, I remember who I gave my number too :)” And it all goes down from there. Literally, that’s all the action he got.

No matter what Aziz talked about, it felt relative, and that’s the sign of a truly great stand-up comedian. We’ve all been to the places that he brought us to that night, but he placed us in new perspectives that were hilarious. For example, he went off on how this generation is the most flakey by far because we’re always waiting for something better to happen; “maybe” becomes the arch-nemesis in trying to make plans with friends. Sometimes we even flake because we’re too lazy to drive! True story. In the topic of creepy dudes, he talked about the common habits of the everyday creeper, such as following girls around in clubs and masturbating in public.

Aziz also spent some time comparing what it’s like to be single and what it’s like to have a significant other. He adds to Chris Rock’s observation of all of us being either married and bored, or single and lonely. Being in a relationship himself, he explains that holding your significant other and watching great TV drama is the epitome of human happiness, which is beautiful and depressing at the same time. It’s these kinds of observations about life that makes him hilarious, and also very grounded and real.

If you’ve never watched Aziz Ansari before, here’s a taste: