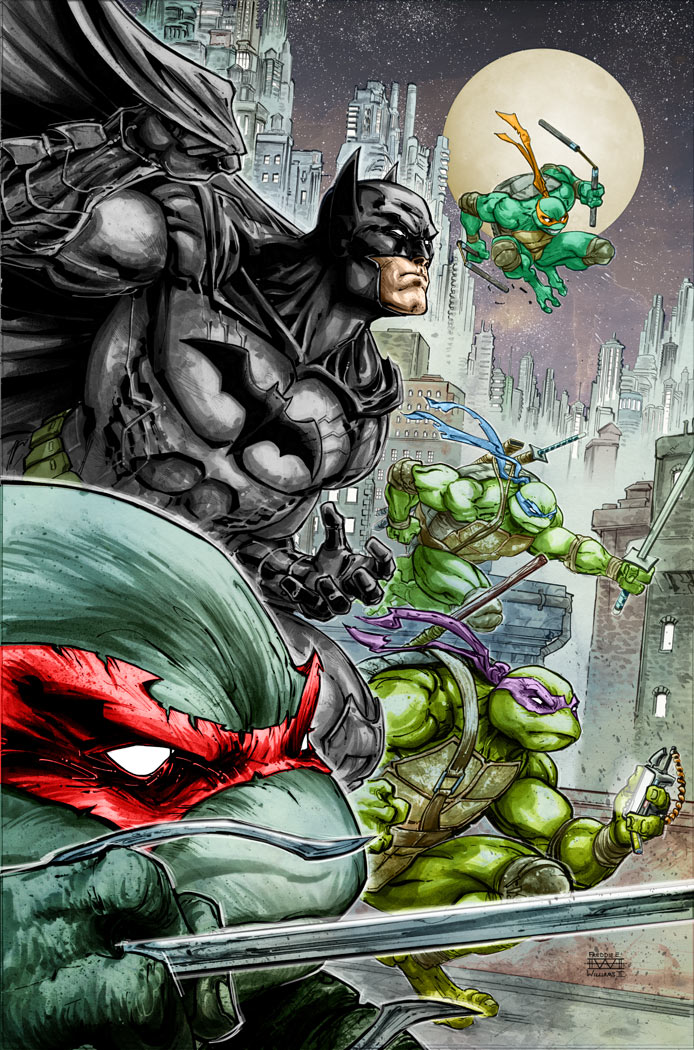 The most surprising news from San Diego Comic Con had nothing to do with Star Wars or Marvel films, but it did include Batman sans Superman. DC Comics and IDW Publishing announced the 6-part, monthly comic book crossover Batman/Teenage Mutant Ninja Turtles during IDW’s SDCC panel.

The turtles and Shredder end up in Gotham after General Krang decides to throw them into another dimension (a very normal thing in TMNT books) which lands them in Gotham City. The only other detail we know is that Batman and his gallery of villains will get plenty of screen time interacting with the TMNT cast.

Some quick takeaways from this insane idea.

1. Has it ever been so easy to take an adult’s money?

The internet is full of imaginative fake news so you’ll have to pardon me if my guard was up for something as exciting as the ninja turtles in DC’s Gotham. Sure, I directed versions of the upcoming story several times with my action figures two decades ago, but I never imagined this would actually happen.

How much are the books? I don’t care. Just show me the pre-order link.

2. What characters will meet?

Batman has been killed twice times in the past seven years, and the turtles currently have someone out of commission… just read the current, amazing IDW series. Anyway, there are several versions of the characters for both universes but the released art suggests a dark world and that all four turtles will be present. Here are some people that need to meet in no particular order.

All of those interactions would be comic gold.

3. Will Batman and company come to IDW’s New York City?

Krang sent the turtles and Shredder to DC’s Gotham City; will the dimensional portal remain open for action in the turtles’ world? Obviously, we have no way of knowing that today, but this is definitely an avenue the creative team should consider.

A lot of people don’t remember this but DC and Marvel had a really crazy crossover book called DC vs. Marvel that ran for four issues in 1996. I’ve only seen a copy of one issue in person, but it is as wacky as it sounds. Frankly, the book makes more sense than some of the the big two’s recent events but that’s a complaint for another day (although Marvel’s Secret Wars is blowing my expectations out of the water halfway through the series).

The anticipation is killing me.