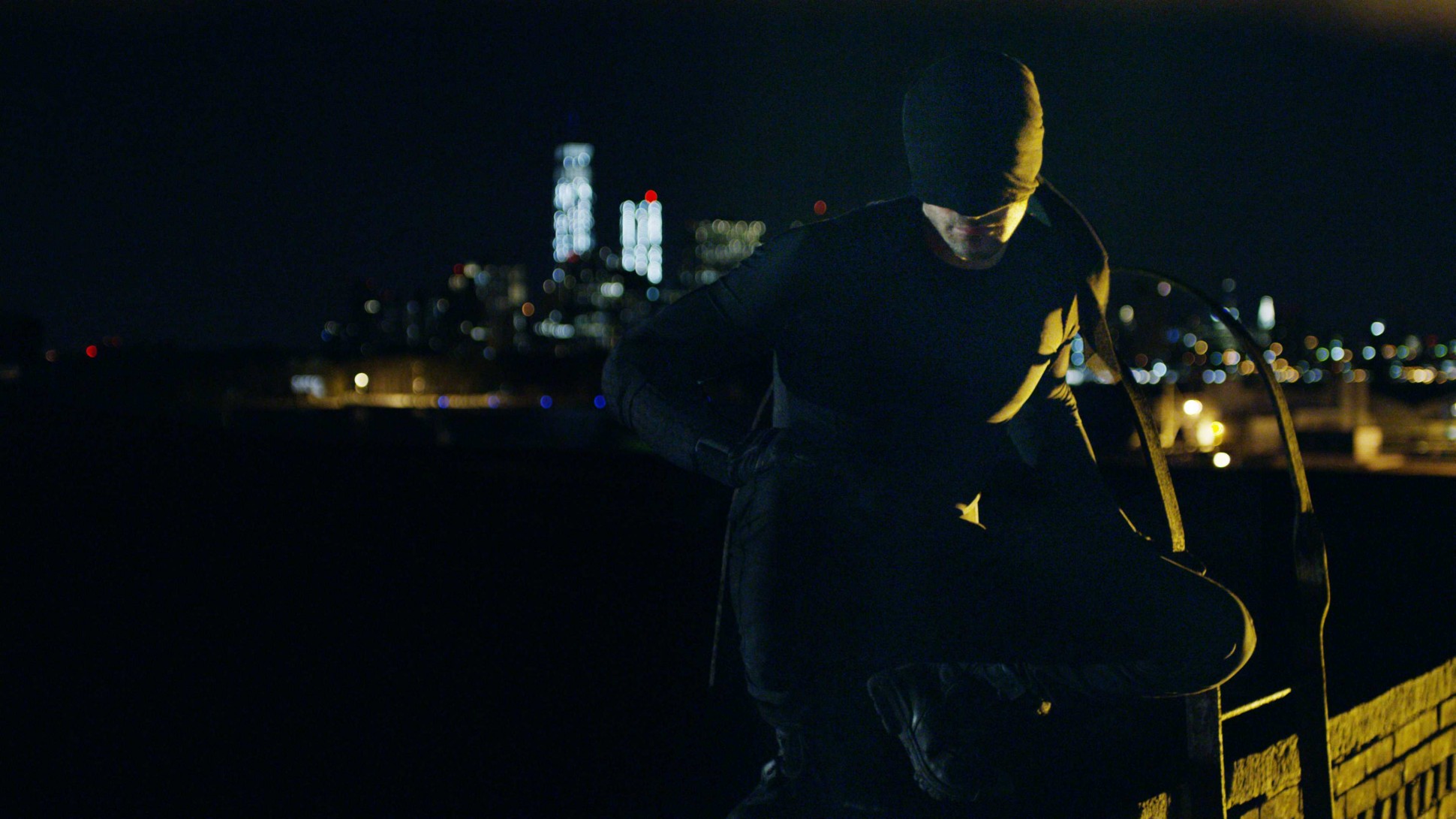 When I was in high school, they showed me Citizen Kane and told me it was the greatest movie ever made because “every single shot was a purposeful decision.” I never quite got Orson Welles’ greatness, but that sentiment that every little detail was given attention in order to create a magnificent whole is exactly how I felt about Daredevil.

No line of dialogue, no moment of choreography or action, no camera angle, no piece of lighting or sound, no plot point, no minor nuance of a side-character is taken for granted in Daredevil. Every single piece of the puzzle serves the next. More importantly, the elite technical and artistic elements aren’t just there to showcase the phenomenal talents of those who made Daredevil, each one is further enlightenment to the show’s themes.

The fact that our main character is blind gives the artists in charge of aesthetics so much flexibilityto play with shadows and light and in so doing they created with practical effects the same thing achieved through heavy doses of animation by 300 and Sin City; a moving, breathing graphic novel. Never is the audience forced to look at a bland beige corridor or a standard office room. Every scene is bursting with color or conversely extreme blacks that turn characters and cityscapes into mesmerizing silhouettes.

The neon lights and reflections off glass, the out of focus city lights in the background, and expert use of pure blackness carve out a show that doesn’t look like anything else. It feels like a 10-hour-long Citizen Kane, where every bit of these remarkable style decisions inform our understanding of what it’s like to live Matt Murdock’s life or those of the people around him.

Perhaps my favorite side-character in the show is the city of New York, specifically Hell’s Kitchen. The fact that the show was filmed on location in the city it is supposed to take place in makes Daredevil feel simultaneously like the most grounded and “real” adaptation of all time and also the most stylish and faithful adaptation of the profound artistry that invented these characters.

Whether it serves to reflect Murdock’s abilities or disability, the chaos of the city, or the moral dilemmas at hand, every tiny element of Daredevil glows in its own right well making everything else around it better.

Speaking of morality, Daredevil has plenty to offer beyond just an unmatched viewing and listening experience. We can argue over the difference in their methods all day, but both Murdock and Wilson Fisk believe that the ends justify their means. The decision to live outside the law to achieve their goals is one they share. Furthermore, Murdock admits to “enjoying” what amounts to torture in order to get the information he needs while Fisk is adamant that he “doesn’t enjoy being cruel.”

This is a comment on the way Americans treat extreme interrogation versus murder and the comment is far more effective than films like Zero Dark Thirty which tend to glorify the “ends justify the means” on one side.

In a scene about midway through the overall narrative of Daredevil, Fisk is giving a speech to the public in which he reveals his goals including his overarching desire to “save the city.” In any other story featuring a “good guy” and a “bad guy” the audience would have been left with the obvious conclusion that he is just lying, because bad guys who kill people tend to be one dimensional on film.

But instead, Murdock uses his heightened senses to detect that Fisk is telling the truth, and the look on his face when he realizes that he and his adversary have the exact same goal, and not as a talking point but in their hearts, is a mixture of absolute confusion and pure horror.

Fisk isn’t the boogeyman. He isn’t some straw man that can justify breaking all the rules to bring down. This nuance blasts away at our entire national discourse, not just in politics but the way people in the world tend to assume that those who disagree with them on big topics are doing so because they are evil, or stupid, or lying, or not objective like we are. Daredevil refuses to treat its characters, even the most brutal ones, as caricatures.

Vincent D’Onofrio is so stellar in his performance that by the end of the season the audience still finds themselves feeling bad, and maybe in some small way rooting for The Kingpin of Crime even though we have personally witnessed him take a man’s head off with a car door. Still, at the end, I find myself with a feeling often reserved for the hero: “Just run off with the girl and get away from all this. You don’t need to do this. You guys can be happy.”

How D’Onofrio and Charlie Cox weren’t recognized by any major awards is beyond embarrassing for the industry. The first time I saw a screenshot of Cox as Murdock my first thought was “he is way too small and I’ve never heard of this guy, I doubt he is good enough to play a character this nuanced.” By the end of his first monologue in the first episode – delivering a “confession” at church – I was over all that.

I would put D’Onofio’s performance right up there with Ledger’s in The Dark Knight but if we’re comparing the Top 2, Cox blows Christian Bale’s Bruce Wayne out of the water. And I’m not anti-Bale and have zero problems with “batvoice” but that’s just how good Cox is in Daredevil. Rosario Dawson also delivers an award-caliber performance as does another newcomer-to-me Toby Leonard Moore who is splendid as Fisk’s only trusted friend, Wesley.

Daredevil is just as good as The Dark Knight in terms of each individual category you could give an award to, and at times is even better. And there’s eight hours more of it.

The only criticism I have of this show is that it can be pretty brutal which will turn some people off, and there is no way they should be able to drink as much as they do with as little money as they make. When you are down to those complaints, you are really nitpicking.

Daredevil makes comments on modern journalism (or the death thereof) and how the law can be used to do evil just as it can sometimes need to be skirted to do good. And then the show asks us to truly consider the consequences of justifying our actions to ourselves especially considering a central theme that the information flow can often keep us from even glimpsing the real truth.

So, if the show is so great, and so well crafted, and so smart and insightful, and so unmistakably gorgeous to watch and listen to … why was it shut out of award season? I cannot say because I do not know. But the 98 percent approval rating from critics who actually did watch the show suggests that we still have a long way toward legitimizing the form in the mainstream.

You couldn’t get 98 percent approval for oxygen in this country so my theory is that just not enough people saw Daredevil since almost literally everyone who did agreed it was phenomenal.

We’ve been talking a lot throughout this list about who these adaptations are for. The big budget movies (Dark Knight, Avengers, X-Men) all need to appeal to wide audiences, some of whom might not have been fans in the first place. Smaller endeavors like the CW shows can focus their content much more specifically toward hardcore fans and do crazy stuff like making King Shark a regular character.

What Daredevil accomplished in Marvel’s partnership with Netflix was to find a middle ground where a more adult and contemporary tone can be taken (as opposed to network TV), but where the budget and process weren’t so grand that they couldn’t afford to take too many risks. Daredevil is the perfect combination of a cop-law-and-justice procedural, an action thriller, a political commentary, and a comic book. It doesn’t have a legacy yet, and those who hand out hardware missed it altogether (and prompted me to boycott both the Emmy’s and Golden Globes), but if the question is what piece of live-action art best combines the most compelling elements of comic books and film, Daredevil is my answer.

It is the greatest comic book adaptation of all time.