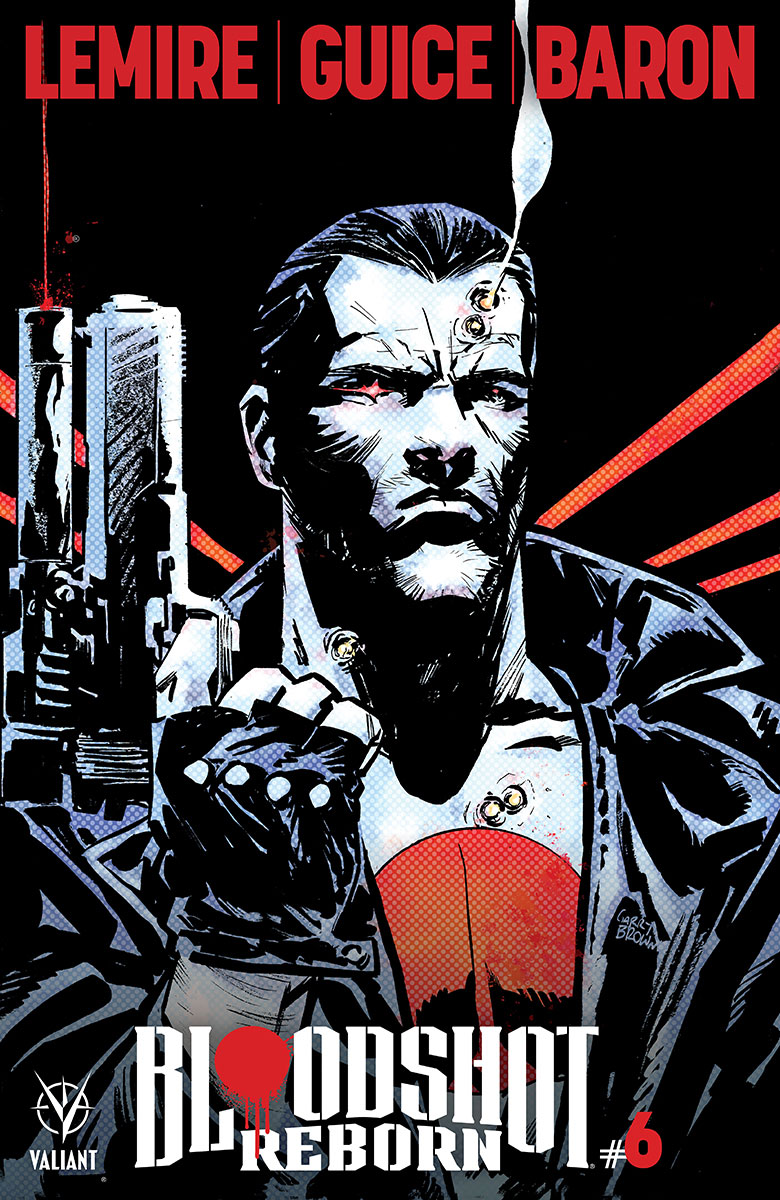 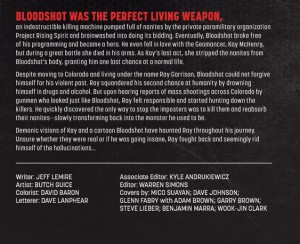 Starting a new arc, it’s no surprise that this issue contains the obligatory re-hash of certain details to keep any potential new readers from being lost. While every Valiant book contains a brief refresher inside the front cover, these details do leech into the panels and this book is no exception. Furthermore, there is a necessity to introduce story elements that will not only play out later in the book, but later in the arc as well. Slowing down the pace set by previous issues, this latest installment definitely leads the story in an interesting direction, although it takes its time getting there.

Aside from a fairly disturbing first page, the opening of the book consists of Bloodshot (now going by Ray Garrison) and tag-along/potential love interest, Magic, discussing the remaining nanite-infected killers loose in the world as well as other, previously established story elements. Art by Butch Guice is the type that almost looks real if you squint, but the panel composition if fairly boring, a trend that is unfortunately consistent through most of the book. 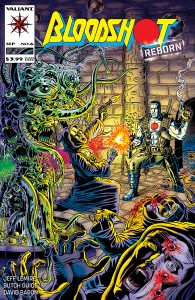 Tracking Garrison as a lead in the recent attacks by pale-skinned killers, are special agents Hoyt and Festival. A new character to the Valiant universe introduced in the first arc, Festival is a 23-year-old phenom in criminal profiling. We learn during her conversation with grumpy old white guy Hoyt that her skills may actually be more than just that, undoubtedly setting her up as a Psiot (Valiant’s term for humans with special mental powers) in future stories. In previous issues, she was drawn as a bottom-heavy woman, a visage that fit well with her quirky methods and bright green glasses. Inexplicably, though, she now seems fitter and more classically beautiful, a disappointing move considering Valiant’s stable of realistically flawed characters.

Once again, Garrison tries to leave Magic behind citing typical reasoning she refers to as ‘tough guy B.S..’ The fact that the book is self-aware enough to call itself out on this is cliche is a bit refreshing, but overall the scene is wasteful: we’ve literally already seen Ray struggling with whether to leave the girl behind or not. This could have been conveyed in a few panels as it was in the previous issue. 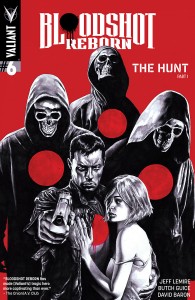 Another played-out story element, a hook-up between the now sexed-up Festival and Hoyt is capped off with work discussion, and again we’re reminded that someone behind the scenes is pushing Festival to look into PRS, Bloodshot’s creators. Between jokes about Hoyt’s performance, Festival learns Hoyt has a connection in G.A.T.E. (formerly M.E.R.O.), a government agency that may have information regarding Project Rising Spirit.

Guided by the nanites he’s recovered so far, Ray arrives at a suburban home to confront one of the four remaining nanite hosts. The scene is dark and moody, the first time Guice’s art truly enhances the story since the opening panels. Expecting to kill the infected and take the nanites into his own blood, Ray laments being caught off guard by what he instead encounters. The book closes with a stunning realization that should make for a fantastic second arc.

Overall, the issue maintains the standards set by the first arc. Although the story takes its time plodding through well-trodden territory, there’s enough to generate interest in the coming books. In typical Valiant fashion, the transition between artists is generally a smooth one. Something between the inks and colors in some of the less exciting panels feels flat, and I would have much preferred the incredible work of Mico Suayan from the previous arc. Despite this, Guice’s work is more than adequate to keep the overall tone of of the book in line and compliments the dark nature of the final scene very nicely.