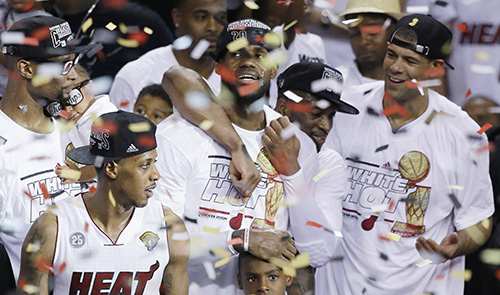 With equity and the middle class in the national dialogue, I’ve began to wonder why NBA D-league teams can’t move up and play against NBA teams. I mean, the NBA allows for teams to be bought and sold to the highest bidder and moved to a different city; but why won’t it allow a city to develop and cultivate an NBA team?

I spent three years of my youth in Spain and during that time became a fan of soccer and the league there, La Liga. For those who don’t know about soccer, La Liga touts such teams as Real Madrid and Barcelona. Perhaps what you don’t know is that these premier teams can fall out of the league (if they have a bad year) and into what is considered their version of the D-league.

Can you imagine a team like the Los Angeles Lakers or the Miami Heat falling out of the NBA and into the D-League to be replaced by the Boise Idaho Stampede and the Reno Nevada Bighorns? Wouldn’t that be something?

Why not? The NBA has become a symbol of big market teams that represent the steadfast presence of the status quo. Top teams have a strangle hold on the market and far outpace their competitors in monetary value which in turn gives them greater ability to draw top-tier talent. This current system does not appear to be going away anytime soon, so if there’s not going to be any shakeup at the top, what about at the bottom?

As it stands D-League players and coaches can be called up to play in the NBA. But I’m not writing about individual talent, I’m talking about the whole system moving up. It’s not just the players or coaches, it’s the trainers, front office workers, stadium managers, agents, concession workers, down to the ballboys. But most of all, it’s the cities and communities that show support for their teams.

Look at what happened in Oklahoma City when the Thunder came into that small town. The draw of an NBA team and other NBA teams coming to visit has made the fans go absolutely crazy. Now there is nothing hotter than an OKC ticket. Imagine that same thing happening in different cities across the US. Like in Canton or Sioux Falls or Des Moines. Now I’m not saying this will happen, but just the idea provokes interest.

We all love underdog stories. In La Liga, a small team called Levante who had been up and down standings and in and out of the first division recently shocked the soccer world. During the 2010-11 season, this little team from a little town, led the league for a good portion of the season. Although they didn’t win, they finished in the top six which allowed them to compete in the European UEFA Cup Tournament, which put their town and team on the map.

We also love a fall from grace and a comeback. Athletico of Madrid, a historically incredibly rich team with nine championships and a UEFA Champions League trophy, fell out of the first division in 2003. After winning the second division in 2005 they have steadily been on a comeback ever since and placed third in the 2012-13 season. What more drama could you want as a sports fan?

Something needs to happen in the NBA. Amongst fans and analysts, there is more and more talk of the need for parity, and I have heard from fringe fans and dihards that they feel the league is getting boring in it’s structure. With the President of the United States himself talking about the need to give the middle class a chance at upward mobility, implementing something similar to what I have written would do just that. It would provide the small guy and the small cities a much deserved chance at glory and break up the monotonous stale 82 game configuration that the NBA has fallen into.

D-League teams and cities are working just as hard to fulfill their dreams of playing in the NBA. The only thing holding them back, is an old system that fears any change that could shake the mountain from its base.