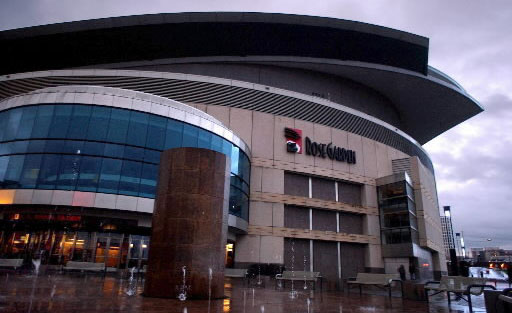 “We just felt Moda Center was iconic; it’s short; it’s easy to remember; it rolls off the tongue really well.”

Rip City, Rip City, wherefore art thou Rip City? Deny thy sponsor and refuse his name! What’s in a name, you doth protest? Everything, methinks.

From Shakespeare to Rumpelstiltskin, we’ve learned that names matter and can dictate our fates. Especially significant are cultural landmarks, and nowhere is this semantic juggling so apparent than in professional sports. As a result, the Portland Trail Blazers’ recent re-branding of the Rose Garden as the Moda Center may seem trivial to some, but personally, it makes me feel like less of a fan.

Before I’m labeled an old-fashioned, nostalgic curmudgeon for opposing this easy revenue, let me dispel the standard criticism. I don’t hate the name Moda Center because it sounds stupid. Neither do I despise this wretched name change because I’m a jaded cling-on to all things technicolor, outdated and inefficient. I don’t think $4.1 million is a measly sum. I hate what the Moda Center represents, the complacency it inspires and the surrender that it reinforces. Maybe this corporate braggadocio fits in Boston or Seattle, but here in Rip City we see things differently. We are a city that leads rather than conforms, and we shouldn’t fall for the false promises of improved “fan experience.”

MODA SPEAK
Consider the difference between the TD Garden and the Boston Garden. While the Boston Garden emphasizes community, a gathering of citizens in a decidedly local atmosphere, the TD Garden presupposes a distance between fans and their franchises. As soon as The Garden gained a corporate moniker, the Celtics became more about the money than the game itself. Although I may sound like Captain Obvious here, it’s an important point. The arena, which should be a sanctuary of collective joy and misery, forces us to concede our material and intellectual inferiority before we even enter the building. Rather than encourage civic collaboration, it satirizes it. While this argument seems farfetched, I’ve seen it happen in Boston, and it will happen in Portland, too. More inflatable Kias will fart out envelopes before the game. Shiny lights will herald only more advertisements, and slowly but surely the beautiful game will become secondary, a mere spectacle to support commodification.

Lost in both spectacles will be our wants and needs. If we readily accept the Moda Center, we establish a pattern of complacency that will undoubtedly be exploited. We the fans can’t even congregate in a building named after our city. How the heck can we expect the front office brass to meet our demands? Today, it’s the Moda Center, and tomorrow it’s renovations for the luxury boxes and more expensive nosebleeds.

Because all these changes will be cloaked in the rhetoric of progress, we’ll follow along obediently. As our perception of Chris McGowan transforms from a soulless, money-grubbing scoundrel to an articulate and shrewd businessman, we’ll watch wealthier fans zip to the front of concession lines thanks to their newly-minted Preferred Moda Member Cards. Wondering where that $40 million went, we, the fans of the actual game, will wait there and miss the tip-off while counting out change for $10 Budweisers.

PDXceptional?
By any other name, the Rose Garden won’t smell as sweet. The Moda Center turns Portland into every other NBA city. It makes our team less special and confirms that we’ve “bought in” to the business of basketball. The president of our franchise will call an insurance company’s name coupled with a noun “iconic,” and he’ll probably mean it. If anything, it’s ironic. Known nationwide as a city that bucks aggressive profit-hungry posturing, this simple re-branding hurts our city and threatens to modify our principles. While I believe in Rip City’s resolve, objections often fall like dominoes. Remember the uproar about the radio-frequency identification chips, the outrage against Facebook’s invasion of privacy? Today, given our new behavioral patterns and portable technologies, it’s hardly possible to maintain private correspondence let alone conceal one’s location. As new Moda Centers appear, the NBA will gradually follow the lead of the NFL. Gamedays will become three-hour orgies of product-placement and elaborately staged commercials which are occasionally interrupted for the game of basketball.

So I beg you, don’t do it. Don’t tell your friends to meet you at the Moda Center. Call it the Rose Garden for as long as you live. I remember when people started using “Google” as a verb. It made me wince. Fusing a company’s name to the act of research seemed so obviously dystopian. Nevertheless, like a stray cat that keeps coming around, I adopted the word, and I’m worse for it. Saying the word was the gateway drug. Too often now, I settle for easy answers and trust too much information. The Moda Center will do the same thing to you. It will erode your love for basketball and make you an accessory to future ticket sale increases. Let this be the last time we mention it. Let the Moda Center roll permanently off our tongues.