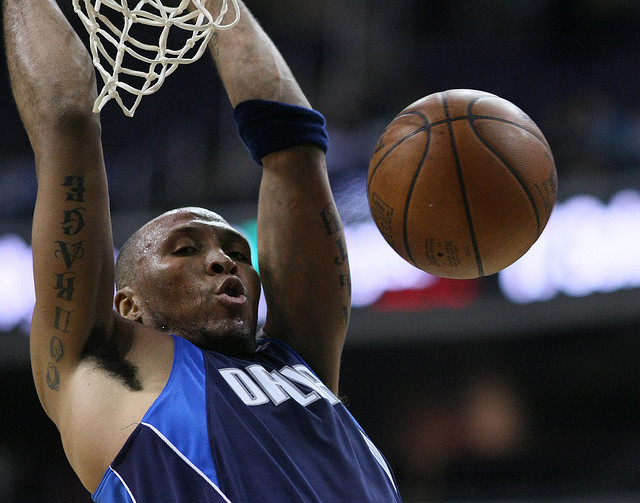 Shawn Marion, the artist formerly known as the Matrix, scored 32 points on 14-of-19 shooting in helping the Dallas Mavericks to a 100-98 victory over the Minnesota Timberwolves on Monday night. Marion’s previous season-high was 21 points, back on November 2. Marion, a former NBA All-Star, was once quite accustomed to such performances, but at this stage of his career, legitimate scoring outbursts are few and far between.

Alas, the Timberwolves have something of a knack for helping players achieve personal scoring records. Their team scoring defense (102.3 points per game) is tied for 23rd in the NBA.

Casual observers were expecting a showdown of power forwards between Minnesota’s Kevin Love and Dallas’ Dirk Nowitzki, something of a battle between Godzilla and Mothra—both monsters on offense with matador defensive tendencies. Nowitzki had a respectable showing with 16 points for the Mavericks, and Love lived up to the billing with 36 points, 11 rebounds and four assists, but it was Marion stealing the show down the stretch.

Nikola Pekovic finished the game with 18 points and 10 rebounds, notching his fifth consecutive double-double, and ninth in the month of December.

Marion hit two three-pointers during a late 10-0 run that put the Mavericks in front late after the Timberwolves seemed to have things within their grasp. Alas, Minnesota struggled to close out once again, allowing a resurgent Mavericks squad to push them to one game under .500 at 15-16 on the young season.

With the victory, the Mavericks took a three-game lead for the eighth and final playoff spot in the Western Conference. Their .581 winning percentage would be the third-best record in the East, but in this season, even good teams will struggle to simply qualify for the playoffs out West.