The Cleveland Cavaliers are reportedly looking to use their $9 million disabled-player exception in acquiring Dennis Schroder. 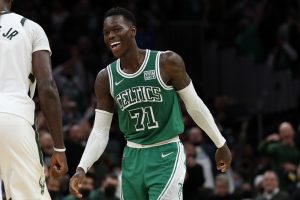 The Cleveland Cavaliers might have eyes for Boston Celtics veteran point guard Dennis Schroder ahead of the Feb. 10 NBA trade deadline. “Today they were granted a $9 million disabled-player exception by the league for the Ricky Rubio season-ending ACL. They can use that to trade for a player with one year left on his contract,” ESPN’s Brian Windhorst said Thursday on NBA Today (5:38 mark). “League executives believe a main target for that will be Dennis Schroder, who fits into that trade exception. Such a trade would potentially take the Celtics below the luxury tax and he could help [the Cavs] on the perimeter.”