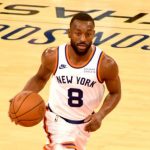 ESPN’s Brian Windhorst reported Thursday that the New York Knicks are looking to deal its more experienced players to make room for its younger stars. “In conversations this week with teams, the Knicks have expressed a willingness to trade some of their veteran players,” Windhorst said on NBA Today. “That includes Kemba Walker, Evan Fournier, Alec Burks, guys like this.”