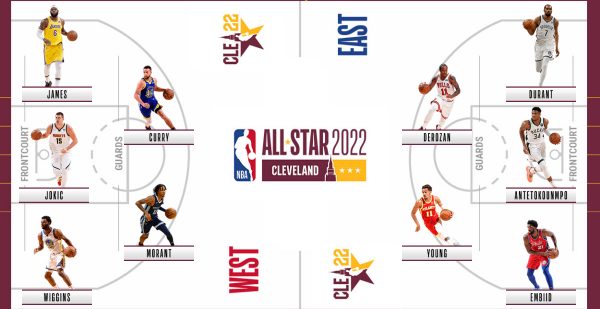 Courtesy of the NBA.

NEW YORK (AP) — LeBron James will return to Cleveland as an All-Star Game captain, and Ja Morant and Andrew Wiggins are headed there as first-time selections.

Reigning Kia MVP Nikola Jokic of the Denver Nuggets and Warriors superstar Stephen Curry joined them Thursday as the other players voted as starters from the Western Conference.

The starters from the East were Brooklyn’s Kevin Durant, Milwaukee’s Giannis Antetokounmpo and Philadelphia’s Joel Embiid in the frontcourt, along with Atlanta’s Trae Young and Chicago’s DeMar DeRozan.

James and Durant, as the leading vote-getters in each conference, will be the captains who draft players for the rosters for the Feb. 20 game in Cleveland.

James, who began his NBA career with the Cavaliers in 2003 and led them to the 2016 championship during his second stint there, was chosen as an All-Star for the 18th straight time. He has been a captain every year since the league went away from the East vs. West format.