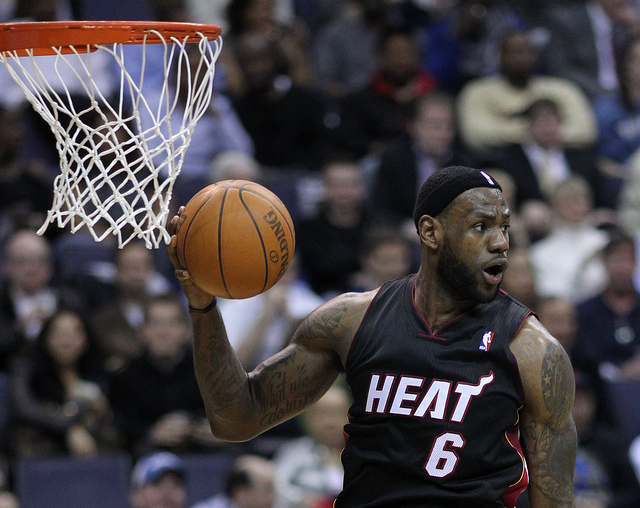 After arguably their worst loss of the season, a meltdown against the Cleveland Cavaliers, the Orlando Magic returned home to host the Miami Heat for the second and final time this season. The outcome was not a favorable one for the Magic, as the Heat led for much of the game en route to a 110-94 on Saturday night. The win was the Heat’s eighth straight in the head-to-head series, and third of the season.

The two division and instate rivals traded buckets for much of the first quarter, with the Magic knocking down 4 of 8 from three to keep themselves in the game early. The second quarter, however, was a much different story for the hosting Magic. They were unable to knock down any threes, allowing the Heat to push their lead up to as many as 10.

The opening of the second half was a different story for the Magic. They were able to fight their way back into the game, and even take a lead very briefly. Unfortunately, their hot start didn’t carry over, as the Heat went on a 15-0 run to take control of the game for good. The final quarter saw Miami push their lead to a game-high 16, one that was insurmountable for the outmatched Magic men.

Miami was led by their big three, combining for 55 points, 20 rebounds and 12 assists on the night. Chris Bosh and Dwayne Wade both finished with 20 points, while LeBron James flirted with a triple-double, finishing the game with 15 points, 8 rebounds and 8 assists. Former Magic forward Rashard Lewis, on retro night nonetheless, scored a season-high 18 points and knocked down three three-pointers. Michael Beasley rounded out the members of the Heat in double figures, scoring 13 points off the bench.

Playing without center Nikola Vucevic for the second straight game and sixth time overall this season, the Magic struggled to find a consistent flow with their offense. Jameer Nelson, who kept the Magic in the game early with his hot shooting start, finished with a game-high 21 points. Tobias Harris notched his third double-double of the season, finishing with 17 points and 10 rebounds on the night. Guards Arron Afflalo and Victor Oladipo chipped in 16 each, while big man Glen Davis finished the game with 14 points and nine rebounds.

One of the brighter sides of the game tonight for Orlando was their ability to get out in transition and score consistently. The Magic finished the game with 17 fast break points on 10-of-15 shooting. They’ve had stretches where they get out and run a lot and are able to do it well, then they have stretches where the only offense is in the half court and they struggle. Coach Jacque Vaughn has talked about the team needing to get out and run some more, but they only need to do it when the opportunity is a good one.

Yet again, the Magic had stretches of the game where their offense was “one pass and shoot” or just straight isolations. The ball sticking and a lack of off-ball movement has been and continues to be a big problem for the Magic this season. They’re unable to find a good balance offensively, and their defense hasn’t been good enough to help turn their defense into offense, something multiple players, including Glen Davis, have preached they have to do this season. It’s concerning, they have guys like Maurice Harkless, Harris and Oladipo who could be dangerous players cutting off the ball, but they seemingly refuse to. Sooner or later something will have to give for the team offensively this season, and when it does the wins could begin to come in.

The longest tenured player on the team, and one of the few veterans the team has, stepped up once again. His 21 points led all scorers, and his hot shooting from three got the team going early. He’s the team’s captain and main leader, so seeing him step up and really get it going early is a good thing for the team. He knocked down 5 of 8 from deep and was one of two players to finish with a shooting percentage over 50 percent on the night. While there’s a question looming over how long he’ll be in town, his continued professionalism is important to the young team.

After the game, the Magic announced they waived big man Solomon Jones, who made the team out of training camp. Jones, who appeared in 11 games this season, tore his meniscus in the second game of the regular season. He was able to return just two weeks later after rehab, but was used sparingly. His contract was non-guaranteed, but would’ve become fully guaranteed on January 10th. The waiving of Jones, coupled with Hedo Turkoglu being waved on Friday, opens up two roster spots for the Magic to either sign players, or bring in players via a trade. It opens up flexibility, and potential makes the Magic one of the more intriguing teams in the coming month.

The Magic, after grabbing a three-point lead, gave up a 19-2 run in the third quarter to see the Heat take control for good.