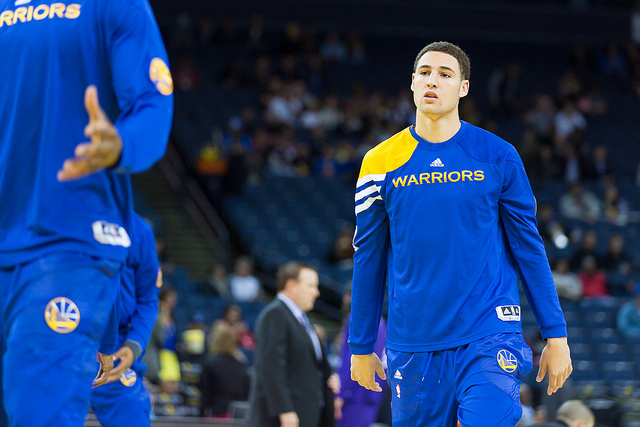 There’s good genes, good jeans, “Good, Gene,”s and then there’s… no, please don’t leave. Come back. I swear I’m done. To put it succinctly, all the guys on this list have basketball in their DNA. Presenting the NBA’s Best Kids Of Former Ballers Squad. Note that we’re keeping an eight-man rotation and playing these guys where we want. Get over it.

PG: Stephen Curry, Golden State Warriors
Stephen is the son of Dell Curry, a playable character in NBA Hangtime, the Pelicans (back when they were the Charlotte Hornets) all-time leader in points and field goals made, and current commentator for the Charlotte Bobcats (and soon to be Hornets… yes, it’s confusing). Dell has passed on his shooting touch and more to Stephen, who at age 25, has already become one of the NBA’s top point guards. The Davidson product is averaging 23.3 points and 9.6 assists per contest, both career-highs. Here are some cool things he did.

SG: Klay Thompson, Golden State Warriors
After Mark Jackson called Stephen Curry and Klay Thompson “the greatest shooting backcourt in the history of the game,” I have no reservations about making KT the starting shooting guard for this squad. The Splash Bros made a combined 483 three-pointers last season, the most ever by an NBA tandem. If that record falls, I highly doubt the new mark will be held by a pair with NBA daddies. Speaking of Klay’s dad, the guy actually had a pretty impressive career. After becoming the first foreign born player to be drafted first overall in 1978, Mychal Thompson went on to win back-to-back titles with the Showtime Los Angeles Lakers in ’87 and ’88. Oddly enough, he was one of four players on the ’87 team who were number one picks. Can you name the other three? Mail your answers along with fifty dollars to my house.

SF: Kobe Bryant, Los Angeles Lakers
We all saw this one coming. Kobe may not be on the floor at the moment, but after nearly averaging a triple-double in the few games he did play this season, he reminded us all that we must never, ever doubt the Mamba. I’m sorry if that was too casual, Kobe. Please don’t hurt me. Anyway, we all know that Kobe’s dad was Joe “Jellybean” Bryant of the Philadelphia 76ers, but what you may not know is that his mother is Pam Cox, sister of former NBA baller *ahem* Chubby Cox. The fact that the Lakers legend has basketball in his blood from both sides surely helps to account for what has been an all-time great career. In fact, it accounts for everything. It was in no way a result of hard work and you should never try. Here are directions to your local homeless shelter, equipped with comfortable lodgings, an excellent support staff and piping hot gumbos.

PF: Kevin Love, Minnesota Timberwolves
This team is good, right? K-Love is currently on pace to average 26, 13 and 4, in addition to countless other nice things that don’t show up in the stat sheet. Outlet passes! No doubt poppa Love is very proud. Stan the four-year NBA vet is the reigning title holder for best basketball card of all time, and also has the honor of saying he was once the bodyguard to none other than Beach Boys lead singer and certified genius, Brian Wilson. Oh, the reality show that could have been.

C: Al Horford, Atlanta Hawks
It’s a shame Al had to go and tear his right boob, because the Atlanta Hawks big man was having a career year before he went down, putting up 18.6 points per game on 56 percent shooting. His father was Alfredo William “Tito” Horford, a second round pick by the Milwaukee Bucks in the underwhelming 1988 draft. Based on some reporting done in the Chicago Tribune over 20 years ago, it seems like Tito could have had a very successful career had he been put in the right situation in his college. Unfortunately, due to a lack of suitable competition and a variety of other factors, his career did not pan out, playing a combined 63 games over the course of his NBA tenure. At the very least, he gets the satisfaction of seeing his son ball on a nightly basis.

PG: John Lucas III, Utah Jazz
The only true point guard remaining, John Lucas III gets the nod over Austin Rivers. He doesn’t put up the same numbers he used to – which weren’t that great to begin with… he had a couple of decent years in Chicago – but that may have a lot to do with the fact that the Utah Jazz don’t have a lot of people who can put the ball in the hoop. You know who could put the ball in the hoop? Segue! I mean, John Lucas II! The first overall pick in 1976, John went on to play four fourteen seasons and coach for six, most recently with the 2002-03 Cleveland Cavaliers. If he’d just held on a little longer, who knows? He could have been the next Mike Brown.

SG: Tim Hardaway Jr., New York Knicks
One of the few bright spots for the New York Knicks this season has been Tim Hardaway Jr. The Michigan lad has thrived in relatively limited opportunities, demonstrating his ability to provide instant offense off the bench and get lethally hot from downtown. It’s still early, but the rookie has shown signs that he might just be able to live up to the legacy of his Miami Heat legend pop, Tim Hardaway Sr. Here is Tim Sr. in my favorite photo of former Knicks head coach Jeff Van Gundy.

F: Ed Davis, Memphis Grizzlies
Shipped over from Toronto in the deal for Rudy Gay, Ed Davis has yet to come into his own at the, “Hey, so, are you gonna be good or what?” age of 24. To be fair, he is only getting seventeen minutes per game and has shown a decent scoring touch, but still. His father was Terry Davis, a 10 year vet whose best year came in 1992-93 with the Dallas Mavericks, where he averaged 12 points and 9 rebounds per contest. I haven’t checked yet, but I have reason to believe he is also playable in NBA Hangtime. I’ll get on that right after I make this team in NBA 2K14 and turn off stamina.